DULUTH — Even as environmentalists in northern Minnesota fight to stop a copper mine because it could send sulfuric acid into the region’s lakes, a proposed iron-mine expansion is drawing concern over the possibility that it could have a similar effect. Northshore Mining, based in Silver Bay, plans to expand its taconite pit south of Babbitt into an area that contains sulfur-bearing rock.

When sulfur in the soil is exposed to water, the runoff can damage streams and lakes. In extreme cases, acid mine drainage can kill everything in a body of water. Northshore owner Cliffs Natural Resources says it can stockpile the sulfur-laden rock to minimize contact with water. But environmental groups are calling on the state to conduct a more detailed study before allowing the expansion.

“This is 2014; we should know better,” said Paula Maccabee, attorney for Water Legacy. “Mining in high sulfur rock requires careful examination of scientific information, conservative assumptions, examination of alternatives to minimize harm, and caution in determining effects on both surface and groundwater,” she said.

Cliffs declined an interview for this story, but issued a statement and answered questions by e-mail.

“Northshore Mining has worked with the Department of Natural Resources and Minnesota Pollution Control Agency over 10 years to develop the current mitigation plan for mining this area of the operation’s reserve,” the company said. “If Northshore does not mine this area, it would reduce the life of the mine, thereby limiting the positive long-term employment and economic benefits of the operation for the surrounding communities.”

This is the first time the state has required environmental review before allowing a taconite company to expose rock with sulfur content. Earlier exposures at the nearby Erie/LTV mine in the 1970s and 1990s resulted in acid mine drainage affecting the Dunka River. It flows between the LTV mine pit and Northshore’s Peter Mitchell Mine pit into Birch Lake, a 7,000-acre lake between Ely and Babbitt, popular with anglers for walleye and northerns.

From Birch Lake the water flows into the South Kawishiwi River, through the Boundary Waters Canoe Area Wilderness (BWCA) and ultimately into the Rainy River and north to Hudson Bay. Water from the waste pile of this sulfide rock has been leaching acidic and toxic runoff ever since. LTV closed in 2000; Cliffs Natural Resources bought the property and is now responsible for cleanup. The company has spent years experimenting with constructed wetlands designed to purify the water, but sulfur and other pollutants running into the Dunka River continue to exceed limits in state statutes.

A new and mammoth rock pile

In a 108-acre area on the edge of its 12-mile-long Peter Mitchell Mine pit just south of Babbitt, Cliffs plans to dig away nearly 10 million tons of surface material and bedrock each year to get at the taconite below. As mining progresses over the course of seven to 10 years, workers will build a pile of waste rock in the pit. The sulfur-laden rock will be placed on top of 5 feet of crushed rock that doesn’t contain sulfur, to minimize contact with groundwater and storm water. As it is built, the pile will be covered with a liner designed to minimize water infiltration, which in turn will be topped with soil seeded with grass. Cliffs says it will cover the pile progressively before each section is likely to start producing acid. The completed pile is expected to cover 153 acres.

Water running off the pile will be directed to the Dunka River, joining runoff from the old LTV stockpile, and flowing into Birch Lake. 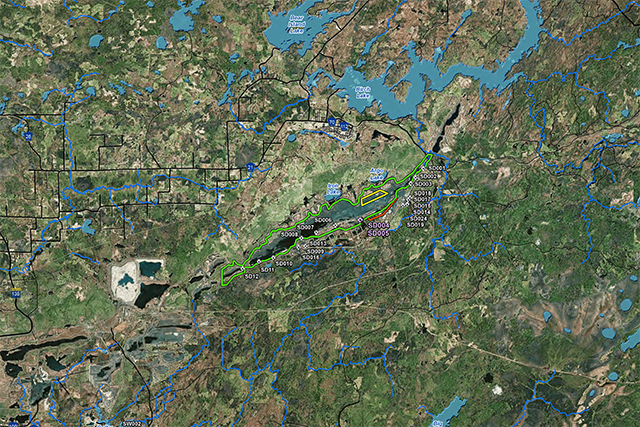 Minnesota Department of Natural Resources
The current mine limits are outlined in green. The proposed expansion area is outlined in red. The yellow outline represents the proposed location for storing sulfurous rock.

Perhaps the most astonishing thing about the Northshore mine is that when it closes, it will change the watershed divide in the area. The mine pit straddles the divide between the Lake Superior Basin (through the St. Louis River) and the Rainy River Basin (through the Dunka River). The land separating the two basins was blasted away, and as long as the mine is in operation, pumps direct water to both basins. But when the mine closes and Cliffs Natural Resources allows the pit to fill, all the water draining from the pit will go to the Rainy River Basin.

While Cliffs says the design of its new stockpile will minimize acid runoff,  environmentalists aren’t so sure.

Kathryn Hoffman, an attorney with the Minnesota Center for Environmental Advocacy, said PolyMet Mining, which has proposed NorthMet, a copper-nickel mine that would be a near neighbor to the south of the Peter Mitchell pit, has gone into much more depth with studying how stockpiles could be designed.

“They looked at placing liners under the stockpile as well as over it,” she said. “They developed strategies for collecting water from the stockpile. To me there’s not a good reason why the Northshore mine shouldn’t be looking at those strategies as well.”

She also said Northshore’s plan doesn’t do enough to deal with heavy metals. “Much of the risk from acidity comes from the leaching of heavy metals,” she said.

The environmental worksheet says cobalt in effluent could increase by 140 percent, copper by 50 percent, and nickel by 268 percent compared to recent water-quality measurements. Yet the DNR’s worksheet says “modeling predicts that the water concentrations will likely be below applicable standards.”

Northshore’s permit expired in July, but the Minnesota Pollution Control Agency is not in a hurry to renew it. (It’s common for industries to continue to operate under expired permits, as long as they are meeting the permit’s requirements.) The agency is working on other permits identified as higher priorities, under pressure from the federal Environmental Protection Agency. The mine’s expired permit does not include limits on cobalt, nickel, copper and other metals; it merely requires the company to monitor for them.

“I don’t think the DNR is holding companies to a standard they should,” Hoffman said. “Conducting an Environmental Impact Statement would bring more agency expertise to bear.”

Water Legacy’s Paula Maccabee said there are many reasons more analysis is needed, but a big one has to do with an issue much in the news lately – the potential impact of sulfate on wild rice. The environmental worksheet predicts increased sulfate content in the mine’s effluent – up to 15 times the state limit for wild-rice waters. The worksheet says the wild-rice standard does not apply in this case, but other DNR documents list Birch Lake as a wild rice lake.

Maccabee also said experiments designed to predict how acidic the runoff will be did not include samples from all parts of the proposed expansion area, making the prediction unreliable. And she suggested the huge pit lake that will be created when the mine closes is liable to put pressure on underlying faults and fractures in the bedrock, creating the potential for polluted water to seep into groundwater systems, including drinking water supplies.

Critics are also concerned about the rock face that will remain exposed after the ore is removed. The vertical wall of sulfur-bearing rock will run more than a mile and a half long and 55 feet high above the eventual water level. Rain falling on the rock will likely form some amount of sulfuric acid. In a statement, Cliffs Natural Resources said its studies “indicate that the relatively small exposure area of the pit wall has insignificant contributions to the pit water chemistry.”

Analysis sought of effects in wider context and over time

Environmental groups want the DNR to conduct a thorough analysis of the potential cumulative effects of the project, considering other taconite mines in the area and the proposed PolyMet and planned Twin Metals mines.

“We need an Environmental Impact Statement to look at impacts on surface water and make sure we’re not allowing high-sulfur water to get into our precious groundwater aquifers,” said Maccabee.

The DNR declined to discuss technical questions about the environmental worksheet. Spokesman Chris Niskanen said the agency has received more than 600 comments, and staffers need to “take a hard look at them and have some pretty intense internal discussion about the technical aspects of the report” before talking to the media. The DNR has until early December to decide whether to do a more detailed study.

Northshore Mining and environmentalists square off over proposed taconite-pit expansion