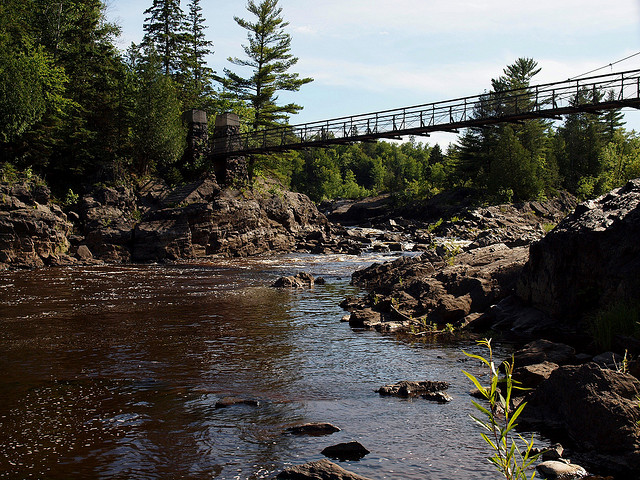 The national group American Rivers has designated northern Minnesota’s St. Louis River one of the 10 most-endangered rivers in the country. The largest U.S. tributary to Lake Superior made the list because of plans for copper-nickel mining in its headwaters.

Visitors to Jay Cooke State Park know the St. Louis River as a rushing rapids, foaming and tumbling over rugged rock formations. Further downstream, it slows to create a 12,000-acre estuary, home to more than 50 species of fish and hosts of migrating and nesting waterfowl.   As it empties into Lake Superior, it welcomes ships from around the world to the Duluth-Superior port, the busiest in the Great Lakes.

At the river’s beginning, 195 miles to the north, the margins of land and water meld as the river meanders through bogs and wetlands that purify water, control flooding and grow wild rice. The Sax-Zim Bog is a popular destination for birders who travel to see some of the 240 species of birds that stop on their migrations or nest there. 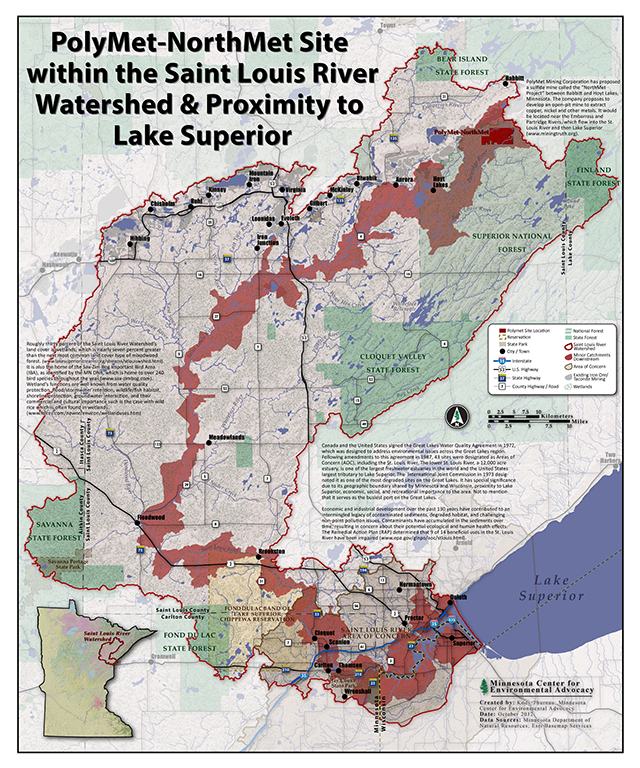 Courtesy of Minnesota Center for Environmental Advocacy
The proposed PolyMet copper-nickel  mine would be built near the headwaters of the St. Louis River, which travels 195 miles through forests and wetlands before emptying into Lake Superior. American Rivers has placed the St. Louis on its list of endangered rivers because the final Environmental Impact Statement on the mine is scheduled to be released sometime in the next few months. (Click for larger map [PDF].)

PolyMet is in the lead among mining companies

North of this bog, near the headwaters of this diverse river, about a dozen mining companies are drilling boreholes, analyzing core samples and planning vast mines. PolyMet Mining is in the lead among these industrial initiatives; the Minnesota Department of Natural Resources (DNR) plans to release the much-delayed Final Environmental Impact Statement (EIS) on its proposed copper-nickel mine later this year.

These initiatives pose the immediate threat that qualifies the St. Louis River for this national list, according to the groups that advocated for its inclusion.

“We’re eager to generate informed public comment for the EIS,” said Andrew Slade, Northeast Minnesota Program Coordinator of the Minnesota Environmental Partnership. “It will be a quick turnaround when that happens, and people are guessing there’ll still be substantial problems with the EIS,” he said. The first version of the EIS, created in 2009, was rejected as inadequate by the federal Environmental Protection Agency, and environmental groups also criticized the second version, released in 2013.

Other organizations behind the listing include the Save Lake Superior Association, Friends of the Cloquet Valley State Forest, and Save our Sky Blue Waters. 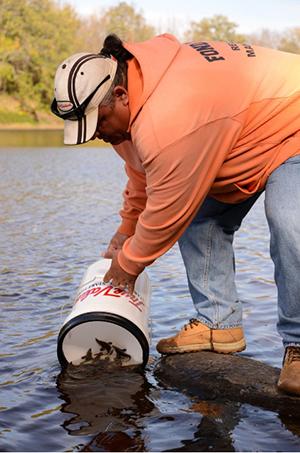 The copper, nickel and other metals PolyMet plans to mine are bound in sulfide rock. When exposed to air and water, the waste rock can produce sulfuric acid, which can leach heavy metals and pollute waterways.

PolyMet Mining says that over the 20 years of the mine’s operation, 533 million tons of material will be dug up and moved. Most of that will end up as waste rock. The company plans to stockpile it and eventually return the material with highest sulfate content to the mine pit, where it will be covered with water to limit formation of sulfuric acid. The company plans to use expensive treatment methods, including reverse osmosis, to reduce sulfate, mercury and other pollutant concentrations in wastewater before it is released to the environment.  According to the 2013 version of the Environmental Impact Statement, the project would result in a net decrease of sulfate and mercury loadings in the St. Louis River.

PolyMet also plans to destroy more than 900 acres of wetlands. The company plans to offset that by restoring other wetlands, but not necessarily in the same watershed.

Minnesota DNR Commissioner Tom Landwehr said mining inevitably disrupts land on the surface, “and the nature of that part of the state is there’s a lot of wetlands, so there’s no doubt there’ll be wetland loss.”  But he said state law doesn’t prohibit wetland loss, and the mine’s mitigation plan will ensure compliance with the law.

Landwehr praised the American Rivers emphasis on the significance of the St. Louis River. He pointed to work being done by several state agencies to restore the health of the river. “It reiterates that which we know: It’s an important river, and we have to be careful that any projects that are ultimately permitted are not going to degrade it,” he said.

Activists hope the appearance of the river on American Rivers’ 10-most-endangered-rivers list will prompt more people to oppose PolyMet and other planned sulfide mines in northeastern Minnesota. Two years ago, American Rivers listed the Boundary Waters Canoe Area Wilderness (BWCA) for the same reason. The group helped organize a petition drive that garnered 13,000 signatures; the petition was delivered by dogsled to politicians in St. Paul.

Other regional rivers championed by the group include the St. Croix, where a major highway bridge is being constructed in spite of the American Rivers campaign, and the Missouri River, where fights continue over flood management.