For many years, the cold, clear water of Lake Superior was pure enough to serve unfiltered as the water supply for cities along the North Shore. But in the late 1960s, scientists at the Environmental Protection Agency lab in Duluth looked through a microscope at a sample of Duluth’s water and saw tiny, thin mineral fragments that looked suspiciously like asbestos.

It’s been known since ancient times that asbestos is harmful to human lungs, so the discovery caused panic in the community. Families lined up at fire stations to get bottled drinking water, and the city rushed to build a filtration plant, which continues to operate today.

The mineral fragments were traced 50 miles up the shore to Silver Bay, where the Reserve Mining Company’s taconite processing plant was dumping thousands of tons of waste rock into the lake. After a long court battle, Reserve was forced to build a disposal pond inland. It was a landmark case, an early flexing of government muscle to protect natural resources from industrial pollution.

For one of the scientists at the EPA lab, Philip Cook, it was also the beginning of a lifelong quest to figure out whether the slivers were really asbestos, and if not, what they were and whether they could also be harmful to human health.

Cook died before he could finish his work. But others took it up, and his week, for the first time, that work will finally be presented at a symposium on elongated mineral particles in Duluth.

Minerals that break into tiny fragments, often mixed with other types, are found in rocks around the world, including on the Iron Ranges of Minnesota and Wisconsin. Minnesota taconite workers have long worried about the fibers, because they get mesothelioma – a rare cancer that attacks the lining of the lung – at twice the expected rate.  Several studies failed to pinpoint a cause of the mesothelioma. But Cook’s work suggests that investigators and the government have been using the wrong techniques to find it.

Cook was a chemist with an incisive mind, deep curiosity, and gritty determination. He invented new methods of isolating and counting the microscopic fragments, and created novel ways of testing more materials faster.

He combined advanced microscopic examination of fibers with dosage studies in rats, introducing as many as a billion fibers into rats’ lungs in an effort to simulate long-term exposure. Studying microscopic images of the rats’ lungs, he realized that some of the mineral particles were actually multiplying.

“We could see some particles were splitting,” said Cook in an interview years later.  “They were breaking off, and the dose was increasing. Nobody had observed anything like that before.”

Cook told anyone who would listen that the standard way of defining these fibers couldn’t explain what was really happening. Federal regulations require mines and other industrial workplaces periodically to measure fibers in the air, using a small pump and collector attached to the worker’s chest.

But the rules only require measurement of long, thin fibers; Cook was convinced shorter fibers could also be toxic. He also stubbornly hung on to his files, even when he was reassigned to study new threats like dioxins and PCBs in the Great Lakes, and the emerging field of bioaccumulation of pollutants in wildlife. 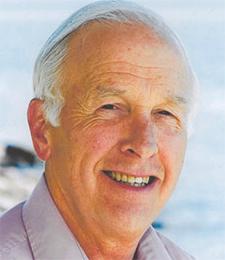 Then, in 1999, he got a call from Libby, Montana, where people were dying from asbestos particles that were mixed with the vermiculite that was being mined for insulation. The EPA’s science adviser for the emergency response operation, Dr. Chris Weis, remembered from his high school days reading about Cook’s work on the Reserve case, and he called to ask for Cook’s help assessing the risk to Libby’s workers and residents.

Weis was astonished when he visited Cook in Duluth.

Cook was eager to apply the techniques and data he had developed in the Reserve taconite case to the Libby vermiculite case. What he learned prompted him to set an ambitious goal: to find a way to predict which types of mineral fragments would be the most harmful.

He studied 50 different types of fibers from around the world, documenting their length, width and other physical parameters.  Then he tested more than 200 different models, and finally concluded that the standard approach was likely excluding the vast majority of fragments in a given air sample. In research papers and in scientific meetings, Cook began to suggest that total surface area was a more reliable predictor of toxicity than size and shape. But this idea challenged the status quo, and some other researchers in the field resisted it.

“He was a unique thinker, and he was a purist,” said Dr. Hillary Carpenter, a toxicologist at the Minnesota Department of Health who worked with Cook on the fibers issue.  “I think one reason it took him so long to finish his work is that he wanted to be sure he presented it in a way that could not be misinterpreted.”

But in 2012, Cook was diagnosed with cancer.

“Phil was angry at the cancer because it was going to keep him from finishing his work,” said Leo Babeu, a friend who helped Cook make maple sugar in the spring.

Cook died in 2013, before he could publish his results.

98 percent of the work

Cook’s boss, the current interim director at the EPA lab, Dr. Dale Hoff, decided the work should be completed. He went to Cook’s home, where the determined researcher had taken the files he was working on when he died.

“He had the model in his head,” Hoff said. “What he did was like 98 percent of the technical work. The easy part at the end was taking his equation and showing which minerals are more or less toxic.”

This week’ symposium in Duluth, “Asbestos-like Mineral Fibers in the Upper Midwest: Implications for Mining and Health Workshop,” is billed as a chance for experts in various fields to share information about the issue in the Midwest. If Cook’s thesis – that small fibers matter — is accepted by other experts in the field, it could ultimately prompt the government to tighten workplace safety standards.

Organizers have nicknamed the Oct. 6-7 symposium the Cook Conference, to honor the tenacity and scientific rigor of the man whose work may contribute to better protection for miners and other industrial workers.