Several years ago, when Baxter officials began to work on a long-range plan for the city’s development, adding some green space to the city’s footprint emerged as a priority. Five years after that plan was adopted, they are getting what they wanted – and then some.

Baxter recently acquired 638 acres of land in the wooded boundary that separates the city from Camp Ripley, the nearby Minnesota National Guard training base. The woodlands promise to provide a wealth of hiking, canoeing and other outdoor pursuits in this town of 7,800 residents.

The land was owned by Potlatch Corp., the lumber supplier, but the city’s proximity to the military base is what made the acquisition possible. Because the boundary around Camp Ripley is part of a landscape area designated for protection from development, state and federal funds covered the $2.2 million purchase price.

“You’ll find cities with some open space where they can expand, but not at this level,” said Josh Doty, Baxter’s community development director. He added: “It’s pretty hard for other cities to come up with the opportunity for 100 percent funding (of such a project). Of course, not everyone has Camp Ripley next door.”

A manicured trail covered with wood chips runs from the end of a road in Baxter into the newly acquired woods, which extend the city’s boundary to the southwest. (Nearby Sylvan Township also got some land, 80 acres, in the acquisition).

For help with the purchase, the city turned to The Conservation Fund, an environmental group that specializes in real estate transactions. The group found the needed funding in the federal Readiness and Environmental Protection Integration Program and the state Environmental and Natural Resources Trust fund.

Emilee Nelson, an acquisition expert for The Conservation Fund, characterized the move as a win-win-win: more recreation for Baxter residents, continued protection for the military base, and long-term preservation of the region’s woods and waters.

“It was a two-year process of really looking at this and thinking, ‘Here is an opportunity with this Potlatch property,’” she said. “‘It’s ripe for development and we would like to help prevent that for Camp Ripley.’”

Brig. Gen. Lowell Kruse, Camp Ripley’s senior commander, praised the move in a prepared statement. “By helping to hold back encroachment on the boundaries of our training area as well as the recreational surroundings we all enjoy as Minnesotans,” he said, “we can work to ensure the readiness of our armed forces and the positive quality of everyone’s precious free time for years to come.”

It wasn’t always clear that the parties involved in the project, which also included the local school district, would be able come together, said Todd Holman, the coordinator of Camp Ripley’s Sentinel Landscape – the region that includes the boundary around the military base. U.S. Sens. Tina Smith and Amy Klobuchar, both Democrats, supported the plan, as did Republican U.S. Rep. Pete Stauber.

“We were looking for common ground, which wasn’t completely obvious, but the city had a great vision for green space that overlapped with the Sentinel Landscape,” he said. “Could we make all of that come together? It took some great synergy.” 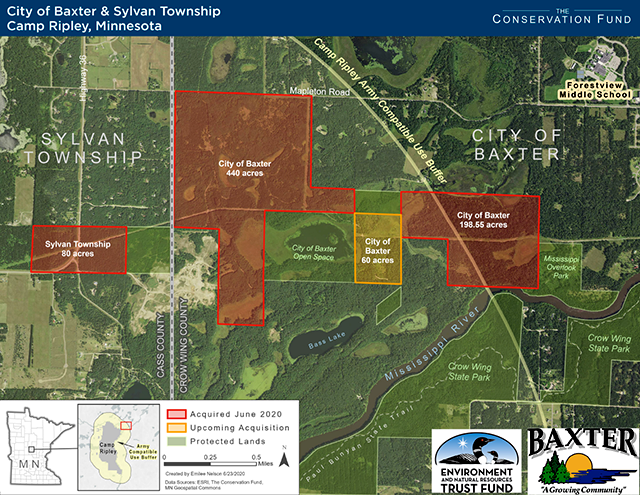 Baxter and its next-door neighbor, Brainerd, have a combined population of 22,000 or so – a number that swells during the summer owing to their location in Minnesota lakes country. But while water is the main attraction, trails are also a big part of the region’s appeal.

The newly acquired land will likely include a stretch of Camp Ripley Veterans State Trail, which will connect to other hiking paths, such as the popular Lake Wobegon and Soo Line trails. Just 20 miles to the northeast, the small cities of Crosby and Ironton have been transformed into destinations for mountain bikers who ride the trails carved into old Cuyuna Range open mine pits.

The city hasn’t determined how it will use the land, Doty said, though it is considering some light development like the canoe entry points and picnic areas that are part of an existing park overlooking the Mississippi R iver, Doty said. The woods, home to rare species like the red-shouldered hawk and the Blanding’s turtle, will certainly be explored by students at nearby Forestview Middle School.

However it turns out, the land will strengthen the city’s connection to the region’s woods and rivers. “It’s kind of our identity,” Doty said.

How the city of Baxter, in Minnesota lakes country, added 638 acres of woods to its footprint