On this date, a century and a half ago, Confederate forces fired on Fort Sumter, on an island off the coast of South Carolina. The Confederate States of America asserted not only their right to secede but also to claim federal property within their borders. The newly inaugurated U.S. president, Abraham Lincoln, rejected both claims and refused to evacuate Sumter.

“Plainly, the central idea of secession is the essence of anarchy,” Lincoln had said in his somber inaugural address a month earlier. “A majority, held in restraint by constitutional checks and limitations and always changing easily with deliberate changes of popular opinions and sentiments, is the only true sovereign of a free people. Whoever rejects it does of necessity fly to anarchy or despotism. Unanimity is impossible; the rule of a minority, as a permanent arrangement, is wholly inadmissible; so that, rejecting the majority principle, anarchy or despotism in some form is all that is left.”

The Civil War, to Lincoln, was never technically a “war” but an illegal and unconstitutional rebellion and a fight to put down the rebellion. The details of the events leading to the firing on Fort Sumter have much to do with this attitude and with his total rejection of the possibility of secession. 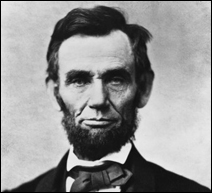 By attempting to resupply Sumter, Lincoln succeeded in forcing the Confederacy to fire the first shots. Lincoln had to accept the loss of Sumter soon after. But he was successful, so to speak, in forcing the other side to start the shooting. Lincoln believed that justified the military actions that he subsequently ordered to put down the rebellion.

What the Constitution says
The U.S. Constitution does, explicitly, empower the federal government (the Congress, actually, Article 1, Sec. 8) to “suppress insurrections.”

The question of whether this was an insurrection or a valid “secession” is much more difficult. In case you’re not up on such matters, you should know that the seceding Southern states left the union by the perfect reversal of the process by which they got in. They held elections (open to white male voters only, of course) to choose delegates to state conventions at which the original decision to ratify the Constitution (also at state conventions with elected delegates) was made.

Lincoln’s position was that these unratifications were impossible and therefore nullities.

But, so far as I know, he had no constitutional language on which to base that position. All he had was his belief that secession was impossible because if states were free to get in and out of the union, a government conceived in liberty and dedicated to equality could not “long endure,” as he put it years later at Gettysburg.

I’ve discussed this problem before, but recently found a new fact I’ll gladly share with you. Here it is:

But the framers of the Constitution, in their wisdom, did not say anything about whether states, after ratifying the Constitution and joining the new arrangement, had the option of changing their minds and getting out. The Constitution simply does not address the question. One could argue that by failing to pick up the perpetuity language from the Articles of Confederation, the framers implicitly left the door open to secession. Lincoln didn’t agree.

Leaving aside this annoying constitutional problem (which I seem unable to leave aside) most of us (at least us northerners) were brainwashed at an early age to believe in the legality and the nobility of Lincoln’s stand.

Many, many nations have broken up since then. The Soviet Union became 15 separate republics. Yugoslavia became seven. Eritrea seceded from Ethiopia.

The United States has opposed some, favored others, and been on both sides of some. The United States, via NATO, helped Kosovo secede from Serbia. For its purposes (canal), the U.S. fomented the secession of Panama from the nation of Colombia. Just this year, a new nation (still considering what it’s long-term name will be) was created out of what had been the southern portion of Sudan.

Most, but not all, of the secessions involved bloodshed. The most peaceful secession of the 1990s was the separation of Slovakia from what had been Czechoslovakia. The Slovaks felt dominated and mistreated. The Czechs said: If you don’t like the union, take a vote and we will respect it. They did and the two countries remain reasonably good neighbors.

What if Lincoln had said the same? It’s a wild counterfactual. Of course, hundreds of thousands who died over the next five years would have lived to die some other, presumably less violent, way. How long would slavery has lasted in the CSA? Would the South ever have reconsidered and tried to get back together with the North? Might the two countries have fought over ownership of the southwestern territories? Or might the two have become friends and allies?

There were very few blacks in the antebellum north. The subsequent northern migration of millions of freed slaves has had huge impacts on culture, politics and economy, especially of the big northern cities. Would that migration have occurred if the migrants had been immigrants who had to cross a national boundary?

The rest of the world little realized at the time what a stake it had in the question. The U.S. was a rising power in the world but Europe still dominated. How would 20th century history have been different if the colossal U.S. superpower had been two smaller powers? Would World Wars I and II have turned out differently? The Cold War — the organizing event of the second half of the 20th century — is hard to picture. What of the current one superpower world?

The implications for 21st century U.S. politics are huge. The South has become the main redoubt of Republican conservatism. (How ironic, since Lincoln was the first Republican president.) The Union states form the base of liberalism and the Dem Party. What would the politics be like in the separate states of our imaginary parallel universe if Lincoln had viewed the Confederacy the way the Czechs viewed the Slovaks?

What if Lincoln had allowed the South to secede?