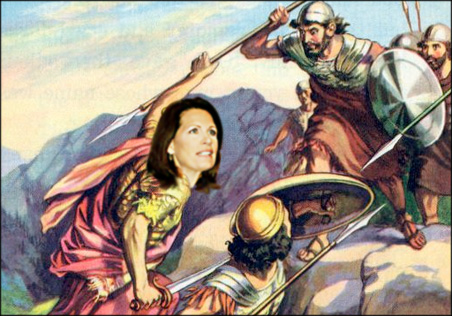 MinnPost photo illustration by Corey Anderson
Bachmann as Jonathan with the armor bearer from 1st Samuel.

The question posed in the headline has a surprising answer. At least by analogy, Michele Bachmann thinks that if the American people will put their unquestioning faith in her, she will be Jonathan, a figure from the biblical Book of Samuel.

Please, let me hasten to reiterate. I am not saying that Bachmann suffers from a literal delusion that she is the biblical Jonathan. Only that she is inspired by Jonathan and believes that, if the American people will play the role of Jonathan’s very trusting armor bearer, and will make her president, and will put their unquestioning faith in her, she can lead them to great victories over their problems of today, just as Jonathan led the Israelites over the Philistines in the second millennium BCE.

The troubling thing about the analogy — if you take it seriously enough to be troubled by it — is that Jonathan didn’t have a real plan for defeating the Philistines. As the Bible portrays the incident, Jonathan apparently had a feeling or a message of some kind from God that if he would just throw himself at the Philistines, God would provide a miraculous victory of one soldier (and one armor bearer) over an entire army.

Jonathan’s servant, his armor bearer in the story, representing the American people in Bachmann’s analogy, agreed to follow Jonathan. And, although it would be crazy for two men to attack an entire army unless they were confident of divine intervention, it worked out for Jonathan and the armor bearer, according to the Bible, presumably because of divine intervention. By drawing the analogy, Bachmann suggests that a similar leap of faith will work out for the American people if they will unquestioningly follow Bachmann into battle against the problems that beset them, even though the battle plan, like Jonathan’s, is long on faith and a little short on concrete earthly details.

Bachmann laid out this analogy at the RightOnline conference in Minneapolis (which happens to be the most recent occasion on which I covered her live).

At the time, I thought it was fairly strange, at a fundamentally secular event and in the last minutes of a fundamentally secular speech, for Bachmann to launch into a Bible story. We’re not talking a passing reference to a Bible story. No. This was a thorough telling of this relatively obscure tale, which occupied the last five minutes of her presentation, with a final segue into her appeal for support of her presidential candidacy. But in that appeal for support, Bachmann embraced  the analogy that made the Jonathan story relevant.

Here’s a superquick summary of the tale, which occurs in the 1st Book of Samuel (and below I’ll append the whole transcript of Bachmann’s telling of it):

It was the time of King Saul, the first king of ancient Israel. King Saul’s army faced Israel’s Philistine enemy. The Philistines had the bigger army, the better equipment and the high ground. King Saul was (quite rationally) intimidated. Saul dithered. (I’m thinking, although Bachmann didn’t make this clear, that in her telling King Saul might represent President Obama, dithering in the face America’s many problems.)

But Saul’s son Jonathan wasn’t afraid and didn’t dither. He said to his armor bearer: let’s attack the Philistines, just the two of us. And the armor bearer said righty-o. I will follow you. And Jonathan set up a little signal that God should give him if God really wanted him to attack. And the signal was given. And Jonathan and the armor-bearer (he is never named in the Bible) attacked and, sure enough, they defeated an entire Philistine army.

Bachmann and me
I often covered Bachmann during her first race for Congress and during the following period. Bachmann often wears her religion on her sleeve. She has publicly called herself a “fool for Christ,” and has claimed to have received direct guidance from God in making major life decisions, including her decision to run for Congress in 2006. Her political success has relied fairly heavily on her appeal to evangelical Christians and there is a legitimate question of how far she can expand her support.

As a secular fellow, an agnostic Jew, I confess this stuff makes me uncomfortable but I have never mocked her religiosity and do not do so now. I support the First Amendment, including its protection of religious freedom. But if Congresswoman Bachmann is a serious contender for the presidency, it’s fair to seek understanding of how her religion affects her thinking and decision-making.

Bachmann’s 30-minute presentation at RightOnline was mostly quite secular. She wants to make Obama a One – Term – President, repeal Obamacare, do away with the entire tax code and make the spending cuts necessary so that the debt ceiling will never have to be raised again. Right at the end, after (inaccurately) asserting that President Obama was trying to force Israel to restore the 1967 borders (she called this one of the most irresponsible things Obama has done), and after asserting to big applause “I want you to know: I stand with Israel,”  Bachmann unexpectedly used the Israel reference to slide into the Bible story set in ancient Israel.

She related the story in a different tone of voice — a little sing-songy, a little unctuous — that I have heard her use often when moving from secular to religious matters. If you watch the tape you’ll hear what I mean.

I was taken aback. At first, I just figured it was part of her deal to work some Bible talk into every occasion, maybe one of those dog whistles that you hear about that send a different message to her more religious followers than they send to the rest of us. And I didn’t, at first, attach much importance to the particular story she told, although after googling around on it I now realize it’s a story she has told on other recent occasions.

And here’s what she said:

“I want to call to mind in remembrance a hero of mine. And he’s from ancient Israel. And from history we know, in the recorded annals of time, that this was someone considered more inconsequential, but to me he had an inspiring, powerful story.

“And there was another battle that Israel faced. And that battle was with a group of people called the Philistines. And the Philistines had a position of power. And they were up on a cliff during the time of this battle.

“King Saul looked up on the cliff and he saw that the Philistines far outnumbered the Israelites. And that they were far better equipped and had every possible advantage that they could have against Israel. And so the king pulled back. And the king saw that because of the great advantage that the Philistines had, he waited. He was paralyzed with fear. And he saw certain defeat for Israel.

“And so Jonathan turned to his compatriot, the armor bearer, and he said these words: ‘Come then, we will cross over toward the men and let them see us. If they say to us: “Wait there until we come to you,” we will stay and not go up to them. But if they say “Come up to us,” we will climb up, because that will be our sign that the Lord has given them into our hands.’

“It’s all because two men had courage. And they scaled the cliffs. And they took the enemy. And they won the day.

“And it’s my opinion that at this moment in American history, the people of this great nation have that courage and they are longing for a president who will listen to them, and who will lead from the front and not from behind, and who will stand with them and take the cliffs of the problems that we have in this country today

“Because the American people know in their spirit that we can do this. That together we can do this and we can turn this country around. And I am here to ask you today, in Minneapolis, Minnesota, if you are ready.

At this point, the sound system blared out with “Stars and Stripes Forever” as Bachmann received a raucous ovation.

If you would like to view Bachmann’s entire 30-minute RightOnline presentation, it’s here.

The embedded clip below is only the last 10 minutes or so of the talk and the transition into the Bible story occurs around the 6:40 mark.

Who does Michele Bachmann think she is?