Warning, a major attack of the history nerd is coming:

Being smart MinnPost readers, I’m guessing that most of you could answer the trivia question: Who were the only two presidents to be impeached? Answer: Andrew Johnson, who served out Lincoln’s second term after the assassination, and Bill Clinton. Nope, can’t count Richard Nixon on a technicality. He resigned before the House could vote up the articles of impeachment.

And you probably know that, although in common parlance impeachment is often used to refer to the removal a president from office, in fact the impeachment is only the first step — equivalent to an indictment — which triggers a trial in the Senate. No president has ever been impeached, convicted and removed.

And chances are, you remember what Bill Clinton did to get impeached, so we won’t talk about that in front of the children. But unless you are a serious history nerd, I suspect that you can’t — without benefit of the Google — recall what Andrew Johnson did to get impeached (and to come much closer — within one vote actually — to being convicted and removed from office). 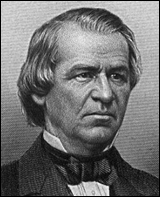 So I’ll tell you the trivia: Andrew Johnson was impeached because he fired a disloyal member of his cabinet (disloyal in the sense that he was refusing to carry out the president’s policies and was actively conspiring with the congressional majority against the president).

This level of disloyalty, I would posit, is not a terrible reason for firing a guy. And I would postulate (having already posited) that such a firing would be a pretty poor excuse for the kind of high crime and misdemeanor required by the Constitution for the impeachment and removal of a president. Feel free to differ.

I can (and plan to) explain a bit further. But first I suppose you are entitled to some clue as to why we might want to think about this ancient history in the year 2011 (other than that it is an exciting and interesting chapter of U.S. history and every year is a good year to learn about those, eh?). But one of the norms (which I hate) of the news business is that in order to write about anything that happened longer than 24 hours ago, you have to have some way to tie it to what’s happenin’ now.

So here’s what’s happenin’ now
Our national government is currently performing poorly (understatement) in the category of cooperation between parties and across branches. Republicans in the Senate have recently made unprecedentedly frequent use of the filibuster (a tool, by the way, which is not provided by the Constitution) to prevent legislation from coming to a vote.

Democrats (in Congress and the White House) ginned up a very tricky and edgy but technically legal use of the “reconciliation” maneuver to sneak final passage of the big health care bill past the Republican filibuster. Most bills involving taxing or spending (or, God help us, the debt ceiling) have been a cause for full partisan warfare leading to brinksmanship, a near-default and a downgrading of the U.S. government’s credit rating.

President Obama has essentially declared that nothing he considers a constructive step to deal with the nation’s severe economic problems can be accomplished if it has to go through Congress, so he has just recently launched a series of small policies (the change in payback requirements for college loans, for example) that he has apparently discovered he can do by executive order. (Apparently this is within the reach of such presidential powers, although I think I would agree with Congressman John Kline that this is not the way such things are supposed to get done. )

And speaking of both impeachment and cross-branch power struggles: Although it hasn’t gotten much attention, Newt Gingrich has used his campaign for president to suggest that the federal judiciary could be made to see reason if a few federal judges (those that Gingrich believes have misinterpreted the Constitution) were impeached or perhaps informed that Congress retains the power to do away with entire courts. (Jefferson did it, Gingrich says.) And then there was Rick Perry’s suggestion that secession isn’t really out of the question in the 21st century.

The American system of government is far far far from perfect and I can think of several structural reforms that I would support. The framers’ system has held up remarkably well for two and a half centuries, all things considered. But in the absence of cooperation and compromise across party and branch lines, weird, ugly things start to happen as hyperpartisans start to scour the rulebook for tricks they can pull that bend but don’t quite break the rules.

High crimes and misdemeanors
There’s only been one complete breakdown, in 1861, when Abe Lincoln’s election (on a platform that said that the federal government had no power to abolish slavery in any of the then-existing states) caused 11 states to secede from the union. Only one senator from one of those states (Sen. Andrew Johnson of Tennessee, himself a slaveholder) declared his loyalty to the union, stayed in the Senate and was subsequently appointed by Lincoln as military governor of Tennessee.

The war lasted so long that Lincoln came up for reelection before it was over. It’s a little remembered fact that Lincoln – the first-ever Republican president — did not run for reelection as a “Republican.” A faction of the party split off and the main portion, which stuck with Lincoln, called itself the National Union Party. Hoping to attract the votes of Democrats who supported the war effort, the party nominated Johnson (who had been a Democrat) as Lincoln’s running mate.

The NUP ticket won, of course, but Lincoln was assassinated five weeks after the inauguration, just as the war was ending, and Johnson became president with almost a full four-year term ahead and a term in which the terms of the readmission and “reconstruction” of the seceded states would have to be work out.

Although Lincoln had outlined a fairly moderate policy for dealing with the conquered South, the “Radical Republicans” who dominated the Congress had much more aggressive ideas.

If you get into the substance of the matter, the case can quickly become morally confusing. Johnson was a virulent racist. Although he did not favor secession, he also did not agree with the Rad Repub agenda to force the southern states to respect the rights of the newly freed slaves. He argued that blacks were “corrupt in principle” and should never be given the right to vote. He vetoed the Rad Repub bills. They overrode the vetoes (on one party-line vote after another). The Rad Repubs had two-thirds majorities in both houses because, remember, the southern states weren’t represented.

Johnson used his control of appointments to put men in charge in the occupied South who shared his views. By some accounts, the tension between the visions of Johnson versus the Rad Repubs was so hot that the Civil War might have broken back out, although that seems far-fetched. In one five-month period, Johnson fired 1,352 postmasters around the country who were loyal Republicans and were not sympathetic to his policies.

Frustrated at Johnson’s use of his appointment powers to frustrate their program, the Repubs passed the Tenure of Office Act, which prohibited the president from firing any confirmed appointees without the Senate’s agreement. That meant Johnson couldn’t even decide who was in and out of his own cabinet. (Johnson vetoed the Tenure of Office bill, of course, but was quickly overridden. Years later, after Johnson was long gone, the Supreme Court did strike down the Tenure Act as an unconstitutional congressional usurpation of presidential power.).

Secretary of War Edwin Stanton, a holdover from Lincoln’s cabinet, vehemently opposed Johnson’s Reconstruction policies and used his place in the Cabinet to spy for and collaborate with congressional Republicans. Johnson fired him on a Friday. The following Monday, by a party-line vote of 128-47, the House impeached Johnson without waiting for articles of impeachment, which were drawn up afterward.

Unfit to be president
There were 11 counts, nine of which repeated over and again that he had violated the Tenure of Office Act by firing Stanton. The last two accused him of bringing Congress into “disgrace, ridicule, hatred, contempt and reproach” by speeches he had given, and the 11th summarized the other 10 and said Johnson’s conduct demonstrated his unfitness to be president.

It seems pretty unlikely that Johnson’s offenses meet an objective standard of “high crimes and misdemeanors” which is what the Constitution establishes as necessary for impeachment and removal. But the Congress had had a bellyful of this accidental (and apparently obnoxious) president pursuing policies that he presumably felt were in the best interests of the country but which they felt strongly were not.

The trial of Johnson on the impeachment charges took two months on the Senate floor. Johnson wanted to attend to defend himself but his lawyers insisted that the sight of him would energize the pro-impeachment forces.

More than two-thirds of Senate members were Republicans. Seven would have to vote against the party line to save Johnson’s presidency. As the vote approached, several expressed reservations.

Sen. Lyman Trumbull, an Illinois Republican and a friend of Lincoln, voted to acquit. He said that if Johnson could be removed without having committed any real crimes or misdemeanors, then “no future President will be safe who happens to differ with the majority of the House and two-thirds of the Senate on any measure deemed by them important.” I hate to show undue sympathy for the racist Johnson, but I have to admit that Trumbull’s point works for me.

Kansas Republican Edmund G. Ross was the seventh Repub to break ranks, which was just enough that the final Senate vote of 35-19 to remove Johnson fell one vote short of the two-thirds required by the Constitution. None of the seven Republicans voted against the party line was ever reelected.

When John F. Kennedy’s ghostwriter Ted Sorenson wrote the Pulitzer Prize Winning “Profiles in Courage” about great acts of political principle, Ross was included as one of the case studies. But more recent scholarship (“Impeached” by David O. Stewart) concludes that Ross was receiving offers of various bribes and appointments in exchange for his vote and playing the sides off against each other. In general, the level of bribery available was so prevalent that Stewart concluded that votes for Johnson’s acquittal “were purchased for with political deals, patronage promises and even cash.”

Johnson beat the conviction by one vote and served out what was left of his term, returned to Tennessee, a hero for his defense of white supremacy, and was reelected to the Senate in 1874. When he died in 1875, he was buried with his head resting on a copy of the Constitution. How touching.

I’ve been fairly depressed about all of Washington’s recent deviations from the happy story we tell our kids in civics class about how our system works. It’s really much hard to take action than to block it. The boundaries of each branch’s power is not really as clear as we like to believe. The system really doesn’t work without compromise. But it doesn’t quite fall apart either. At least so far. Which is pretty amazing.

And we’ve been through worse. Much worse. And here we still are.