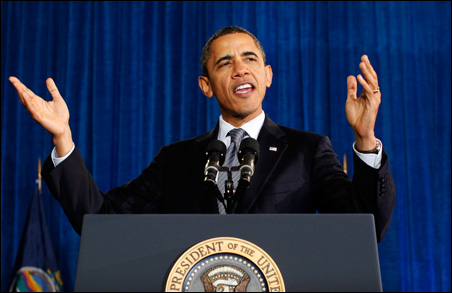 REUTERS/Kevin Lamarque
President Barack Obama speaking about the economy during a visit to Osawatomie High School in Kansas on Tuesday.

I’m not sure what has been the reddest of red states over the long haul, but Kansas would have to be in the running. Since being admitted to the Union in 1861 (just as the union was disuniting), Kansas has participated in 37 presidential elections and been carried by the Republican candidate 31 times, including the last 11 in a row.

So President Obama probably didn’t choose Osawatomie, Kan., as the site for his big Tuesday speech because he hoped to put Kansas into play. But obviously Obama was hoping to associate himself with former Repub President Theodore Roosevelt, who gave a famous speech there in 1910.

I wasn’t blown away by the Obama speech, although I thought it was fine and do believe at the moment that he is identifying a set of themes that will continue to put the Repubs on the political defensive. But Obama’s familiar insistence “asking the wealthiest to pay their fair share” of taxes sounds pretty tepid compared to the Teddy Roosevelt speech, which covered many similar themes but more bluntly.

You can read the whole Roosevelt speech here. But in case you don’t click through, below are some samples of the Rooseveltian rhetoric from Osawatomie’s previous moment in the national spotlight, featuring an attack on the excessive concentration of wealth that Obama wouldn’t dare to go near. Said Roosevelt in 1910: 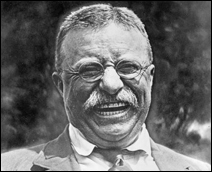 “In every wise struggle for human betterment one of the main objects, and often the only object, has been to achieve in large measure equality of opportunity. In the struggle for this great end, nations rise from barbarism to civilization, and through it people press forward from one stage of enlightenment to the next. One of the chief factors in progress is the destruction of special privilege. The essence of any struggle for healthy liberty has always been, and must always be, to take from some one man or class of men the right to enjoy power, or wealth, or position, or immunity, which has not been earned by service to his or their fellows.”

“At many stages in the advance of humanity, this conflict between the men who possess more than they have earned and the men who have earned more than they possess is the central condition of progress. In our day it appears as the struggle of freemen to gain and hold the right of self-government as against the special interests, who twist the methods of free government into machinery for defeating the popular will. At every stage, and under all circumstances, the essence of the struggle is to equalize opportunity, destroy privilege, and give to the life and citizenship of every individual the highest possible value both to himself and to the commonwealth. That is nothing new.”

“I stand for the square deal. But when I say that I am for the square deal, I mean not merely that I stand for fair play under the present rules of the game, but that I stand for having those rules changed so as to work for a more substantial equality of opportunity and of reward for equally good service. One word of warning, which, I think, is hardly necessary in Kansas. When I say I want a square deal for the poor man, I do not mean that I want a square deal for the man who remains poor because he has not got the energy to work for himself. If a man who has had a chance will not make good, then he has got to quit.”

“The Constitution guarantees protection to property, and we must make that promise good. But it does not give the right of suffrage to any corporation…. There can be no effective control of corporations while their political activity remains. To put an end to it will be neither a short nor an easy task, but it can be done…Corporate expenditures for political purposes, and especially such expenditures by public-service corporations, have supplied one of the principal sources of corruption in our political affairs.”

“The effort at prohibiting all combination has substantially failed. [This is a reference to the effort at ‘trust-busting’ that he inaugurated as president, but which he felt had not been pursued vigorously by his successor, William Howard Taft.] The way out lies, not in attempting to prevent such combinations, but in completely controlling them in the interest of the public welfare.

“The absence of effective State, and, especially, national, restraint upon unfair money-getting has tended to create a small class of enormously wealthy and economically powerful men, whose chief object is to hold and increase their power. The prime need to is to change the conditions which enable these men to accumulate power which it is not for the general welfare that they should hold or exercise. We grudge no man a fortune which represents his own power and sagacity, when exercised with entire regard to the welfare of his fellows…

“We grudge no man a fortune in civil life if it is honorably obtained and well used. It is not even enough that it should have been gained without doing damage to the community. We should permit it to be gained only so long as the gaining represents benefit to the community. This, I know, implies a policy of a far more active governmental interference with social and economic conditions in this country than we have yet had, but I think we have got to face the fact that such an increase in governmental control is now necessary.

“No man should receive a dollar unless that dollar has been fairly earned. Every dollar received should represent a dollar’s worth of service rendered — not gambling in stocks, but service rendered.”

“The really big fortune, the swollen fortune, by the mere fact of its size, acquires qualities which differentiate it in kind as well as in degree from what is possessed by men of relatively small means. Therefore, I believe in a graduated income tax on big fortunes, and in another tax which is far more easily collected and far more effective-a graduated inheritance tax on big fortunes, properly safeguarded against evasion, and increasing rapidly in amount with the size of the estate.”

“The right to regulate the use of wealth in the public interest is universally admitted. Let us admit also the right to regulate the terms and conditions of labor, which is the chief element of wealth, directly in the interest of the common good. The fundamental thing to do for every man is to give him a chance to reach a place in which he will make the greatest possible contribution to the public welfare. Understand what I say there. Give him a chance, not push him up if he will not be pushed. Help any man who stumbles; if he lies down, it is a poor job to try to carry him; but if he is a worthy man, try your best to see that he gets a chance to show the worth that is in him. No man can be a good citizen unless he has a wage more than sufficient to cover the bare cost of living, and hours of labor short enough so after his day’s work is done he will have time and energy to bear his share in the management of the community, to help in carrying the general load. We keep countless men from being good citizens by the conditions of life by which we surround them. We need comprehensive workman’s compensation acts, both State and national laws to regulate child labor and work for women, and, especially, we need in our common schools not merely education in book-learning, but also practical training for daily life and work.”

“We need to set our faces like flint against mob-violence just as against corporate greed; against violence and injustice and lawlessness by wage-workers just as much as against lawless cunning and greed and selfish arrogance of employers. If I could ask but one thing of my fellow countrymen, my request would be that, whenever they go in for reform, they remember the two sides, and that they always exact justice from one side as much as from the other. I have small use for the public servant who can always see and denounce the corruption of the capitalist, but who cannot persuade himself, especially before election, to say a word about lawless mob-violence. And I have equally small use for the man, be he a judge on the bench or editor of a great paper, or wealthy and influential private citizen, who can see clearly enough and denounce the lawlessness of mob-violence, but whose eyes are closed so that he is blind when the question is one of corruption of business on a gigantic scale.”

“Those who oppose reform will do well to remember that ruin in its worst form is inevitable if our national life brings us nothing better than swollen fortunes for the few and the triumph in both politics and business of a sordid and selfish materialism.”