Gov. Mark Dayton will never be mistaken for Hubert (“The Happy Warrior” and practitioner of “The Politics of Joy”) Humphrey. But for those who have seen him over his career, it is noticeable that he has seemed just downright happier during his two years at governor than he has for ages, most especially during his one unhappy and unsuccessful term as U.S. senator.

Could it be that the job agrees with him? He told me yesterday that it’s “easily the best job I’ve ever had.” That made him Exhibit A for political scientist Alan Rosenthal at a gathering yesterday at the Minnesota History Center to talk about his book about gubernatorial happiness in general, titled “The Best Job in Politics.”

Dayton and former Gov. Al Quie (who actually had a pretty rough term back in 1979-82 and didn’t seek a second one) spoke at the event.

For his book, Rosenthal interviewed every single man or woman who held a governorship between 1980 and 2010. In his remarks, he said that 12 former governors are currently serving in the U.S. Senate, and 11 of them say that governor was the better of the two jobs. (The exception was Sen. Jay Rockefeller of West Virginia, but Rosenthal wisecracked that he’s pretty sure that’s because Washington has better restaurants.)

Tom Carper of Delaware, who is completing his second Senate term and previously served two terms as governor, told Rosenthal that “My worst day as governor was better than my best day as a United States senator.”

Why? Well mostly because being the sole chief of the executive branch of a state provides a lot more ability to turn your policy ideas into action than being one of 100 members of one house of the 535 member legislative branch of the U.S.A.

Dayton was brief and mostly lighthearted in his remarks at the History Center event. He joked that this is not necessarily the best week to ask him if governoring is the best job (apparently, the job is more fun when the Legislature is out of session and would be even more fun if his party controlled the Legislature). On that last point, Dayton cracked “in the playground of government, you don’t get to pick your playmates.”

‘I know them both well’

Referring to Amy Klobuchar, who won his Senate seat in 2006, Dayton said, “she’s a great improvement over her predecessor. I know them both well, so I speak from experience.” 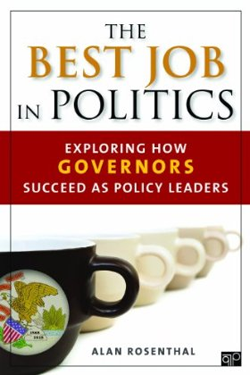 As he headed back to the Capitol from the event I had a moment to ask Dayton to explain as concretely as he could why one job was so much better than the other. A governor can be much more “proactive” about injecting his policy preferences at least into the discussion and, if you can convince the public and the Legislature, into law. In the Senate, Dayton said, the two keys to getting anything done are building your seniority and being in the majority party. He started his term as literally #100 on the seniority list and a member of the minority caucus. “To not feel like you are making a difference in people’s lives was very frustrating.”

Former Gov. Quie did not say that his gubernatorial term was the happiest of his career, and it seems obvious why not. He inherited a tanking economy and an ongoing budget crisis that presented him with a series of unpopular choices. Before that, he had a long and productive career in the U.S. House, where he built up his seniority and became a major voice in his favorite issue area of education.

A lifelong Republican, Quie was considered a solid conservative in his day, but as the party swung hard right in recent years and Quie didn’t always swing with it, he became a mild-mannered and always civil renegade. In 2010, he broke ranks and endorsed Independent Party nominee Tom Horner for governor and was one of three retired Republican statewide office-holders to be officially banished from the party.

I mentioned that sad chapter because Quie seemed to go out of his way yesterday to reinforce his apostate credentials by saying, apropos of nothing to do with the topic of the day, that education is important, that it costs money to make it better, that “it’s worth spending more money, and it’s worth raising taxes to do it.”