One in a series of articles.

What’s bothering you? And what’s causing the bother?

Judging by polls (and what else do we have to go by?), a lot of things are bothering us about our politics, our government, the direction of our country, the choices we have in the coming election, the quality of the discourse, the way the campaign is conducted.

As the calendar creeps closer toward the “fiscal cliff” (also known as “taxmageddon”), let’s throw out a couple of bothersome examples: Gridlock, brinksmanship, hyper-partisanship, having to vote for the lesser of two evils.

Why can’t they get along or compromise or put the national interest ahead of their political squabbling?

If you are a Republican, you may also have been majorly bothered by the recent Supreme Court decision upholding the constitutionality of the major elements of the “Obamacare” law. If you are a Democrat, you may be upset about how close the (conservative-dominated) Supreme Court came to striking down that landmark law, or you may still be upset about a different, slightly older, 5-4 Supreme Court ruling, in the Citizens United case, that created the current superPAC-ification of our already out-of-control campaign finance system. In the term that just ended, the justices declined to change their minds about that one.

If you are a Floridian or Ohioan or resident of any of the eight to 10 designated swing states (and assuming you don’t own a TV or radio station), you may be bothered by the wholesale purchase of air time in your community for the endless repetition of scary-voiced half-truths designed to make you want to vote against Barack Obama or Mitt Romney in November, either of whom (depending on the ad) is a threat to your life, liberty or happiness, or least to your Medicare, and everything that’s good and decent about America. If you are a resident of Minnesota or any one of 40 or so other states that have been designated as non-battlegrounds, you may feel slightly neglected, taken for granted and maybe irrelevant in the race for president.

Well, we could go on, but let’s stop for now with those examples. What is causing these botherances?

We tend to attribute them to what we take to be the proximate cause, namely the most recent actions by the current actors. Perfectly reasonable.

And — because of the worshipful attitude Americans bring to the founders of the Republic and the Framers of the U.S. Constitution — we are unlikely to think about the degree to which the botherances are rooted in the rules and the system that the Framers gave us in 1787.

But, at the risk of committing sacrilege, to the extent that they are about the way our government is functioning or malfunctioning, our botherances are rooted in the system, as written by the Framers, as amended, as revised by various Supreme Court interpretations and as evolved by other slightly mysterious means.

A lot of aspects of the Constitutional system are invisible to us because we are so used to them. Since this is a presidential election year, the Electoral College system is a good example, and as this series progresses the sources and history of that strange system will be under the microscope. But I can tell you this for starters: A great many new democracies have created systems of government since 1787, and they have had the benefit of the U.S. example. They haven’t adopted anything like the Electoral College system. In fact, none of the newer democracies has embraced the U.S. Constitution as the model they wanted to follow.

And many things that most Americans think are in the Constitution are not — at least not explicitly. For example, read Article III, establishing the Judicial Branch. Not a syllable of it grants the Supreme Court the power to overrule the more democratic legislative and executive branches on what laws they can pass or how to administer them. This is at least an awkward omission, considering how fundamental to our understanding of the balance of power this authority is. And this should be especially awkward to those conservatives who take the position that the federal government has no powers other than those explicitly enumerated in the Constitution.

For today, let’s focus on the “gridlock,” which may rank at the top of the list of currently fashionable complaints. 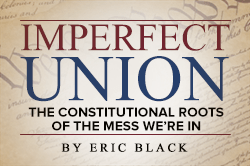 Senate Republican Leader Mitch McConnell probably regrets having said in 2010 that his top priority is to make Barack Obama a one-term president because his statement has become the symbol for the idea that the Republicans are willing to sabotage the economy if necessary to set them up to win the 2012 election. But he’s stuck with it. And it offers — at least to liberal/Democratic ears — a simple explanation for gridlock. We have gridlock because the Republicans won’t compromise because they want Obama to look bad so they can win the next election.

For the moment, I’m not so interested in how true and/or fair that summary is (although much deeper poli-sci thinkers than myself subscribe to it). I want to raise a more fundamental question.

It’s the most natural thing in the world for Mitch McConnell to want his party’s candidate to win the next election, and to do what he can to bring that about. Don’t fault him for that. Winning elections is, in a sense, why political parties exist. But McConnell is only the minority leader of the U.S. Senate. How can he, in a democratic system, bring about gridlock?

Well, the problem is that our system is built for gridlock. It creates more choke points along the path from bill to law, and empowers more groups to stop the action, than just about any other in the world.

So start with the fact that McConnell’s party holds a majority in the House, and no legislation can be enacted without the support of the House. It used to be fairly common in U.S. politics for one party to hold the presidency and control both houses of Congress. Now it is relatively rare (although Obama and the Democrats had that situation in 2009-10).

If a party holds just one of those three towers of power, it’s fairly easy for that party — if they choose that strategy — to see to it that nothing much happens.

There are many democracies around the world. Some of them have two houses of the legislature, like ours. In some of those, one of the houses is relatively weak (the House of Lords in Britain and the Senate in Canada leap to mind).

But, if you want to create the maximum number of choke points, you should have two houses and require every bill to have majority support in each house.

And, in our system, even legislation that has the support of majorities of both houses plus the White House cannot become law if 41 of the 100 senators use the filibuster to block it (unless it is one of the relatively few bills that are allowed to circumvent the filibuster through the hilariously misnamed loophole called “reconciliation”).

The U.S. filibuster tradition, which deserves a whole separate story of its own, is unique. University of Minnesota political scientist David Samuels, who studies comparative democratic systems around the world, says he doesn’t know of anything much like it.

Then — as the Supreme Court case on the Obamacare law reminded us — even a bill that has run the gantlet of passage by both houses, overcoming or circumventing (in this case it was some of both) a filibuster in the Senate and dodging the potential for a veto by the president, can still be defeated by the least democratic branch, the Supreme Court.

Yes, I know. The Supreme Court, by a one-vote margin, did not strike down the law, although it did substantially change the law in a way that the Congressional Budget Office projects will result in about three million Americans being without health insurance who would probably have been covered if the Supreme Court had let the law stand in its entirety.

The experts on comparative democratic systems around the world who have been advising me on this series generally agree that the U.S. system grants more power for the courts to overrule the elected branches — and that the U.S. Supreme Court does so more often — than anywhere else.

Few things, if any, are more widely and secularly worshipped by Americans than our Constitution, which is the symbol, nay the apotheosis, of our system of government, which our speechifiers routinely declare to be the greatest such system ever developed by humans.

And yet, if you look around the world where many democratic systems of government now exist, ours erects more barriers to the enactment of a law than any other.

Yes, the gridlock that is bothering you is the immediate result of some fairly recent and important changes in how our political parties play the game. For most of recent history, the parties have been broad, overlapping coalitions. In the days when there were liberal Republicans and conservative Democrats, it made sense that there would be bipartisan coalitions for and against many things.

But they are still playing the game within the rules.

And the rules are established in (or near, or at least under) the Constitution. If we want to understand the source of what’s bothering us, we have to be willing to trace the bother to its source. In many cases, that source lies within the Constitution or, in some cases, to aspects of the system that most Americans probably think are clearly rooted in the Constitution

Well, this little screed — Or do I mean tone poem? You tell me — is the introductory installment in an ongoing series that will bravely seek to explore the connection between the news and the olds, between what’s bothering us now and the system in which the botherances are, at least in many cases, rooted.