In the previous installment, I committed major (but scrupulously factual) sacrilege in suggesting that Chief Justice John Marshall’s ruling in Marbury v. Madison — establishing the power of the Supreme Court to strike down acts of Congress — was a cesspool of partisanship and what conservatives would call judicial activism. It was. And yet this case is one of the foundation stones of the mythic U.S. Constitution.

It strikes me that conservatives especially, who sometimes insist that no federal power exists except those powers that are explicitly enumerated in the Constitution (which the power of judicial supremacy is not), should be troubled by this case.

Nonetheless, I promised to begin this installment with Marshall’s rationale from his ruling in the case in which he asserted the power of judicial review, sometimes called judicial supremacy, which means that court has the final say on issues of constitutionality. It went thus:

It is emphatically the province and duty of the Judicial Department to say what the law is. Those who apply the rule to particular cases must, of necessity, expound and interpret that rule. If two laws conflict with each other, the Courts must decide on the operation of each.

Those, then, who controvert the principle that the Constitution is to be considered in court as a paramount law are reduced to the necessity of maintaining that courts must close their eyes on the Constitution, and see only the law [e.g., the statute or treaty]. This doctrine would subvert the very foundation of all written constitutions.

It’s an elegant argument. The opening line of that passage can be quoted from memory by most judges and maybe most lawyers. It’s compelling. If laws that violate the Constitution can be passed and enforced, then what good is the Constitution?

But it finesses another question. If one presumes that the Congress that passed a law and the president who signed (even if they are not the authors of the Constitution) believe the law to be constitutional, why should the decision of unelected judges be the one that counts?

Looking back centuries later, it seems the Marbury case settled that question, but it really didn’t. If I have intrigued you with the notion that perhaps the doctrine of judicial supremacy is not quite as clear, constitutional and unquestionable as usually presented, perhaps you will enjoy knowing that included among the skeptics of the doctrine were such American demigods as Thomas Jefferson and Abraham Lincoln.

In 1804, Jefferson wrote: “The opinion which gives to the judges the right to decide what laws are constitutional and what not, not only for themselves in their own sphere of action but for the Legislature and Executive also in their spheres, would make the Judiciary a despotic branch.”

Later, in retirement in1819, he wrote that: “[T]he Constitution on this hypothesis is a mere thing of wax in the hands of the judiciary, which they may twist and shape into any form they please.

“If this opinion [he wrote in the same 1819 letter] be sound, then indeed is our Constitution a complete felo de se [act of suicide]. For intending to establish three departments, coordinate and independent, that they might check and balance one another, it has given, according to this opinion, to one of them alone the right to prescribe rules for the government of the others, and to that one, too, which is unelected by and independent of the nation.”

Well, it’s only Jefferson, but he’s entitled to his opinion.

Interestingly, after Marbury the Supreme Court did not strike down another federal law for more than 50 years, after even young John Marshall had grown old and passed from the scene.

That next act of judicial supremacy was also highly controversial. It came in the form of the infamous pro-slavery Dred Scott decision of 1857, which is justifiably considered one of the worst in Supreme Court history. The court struck down the congressional measure known as the Missouri Compromise that had modulated the conflict between pro- and anti-slavery elements in the prior period.

Abraham Lincoln, a brilliant lawyer and a harsh critic of the Dred Scott decision, came to a conclusion similar to Jefferson’s, that while the Supreme Court had the final word on who was the winner of a particular lawsuit, it could not necessarily impose an interpretation of the Constitution with which the members of the other branches disagreed. 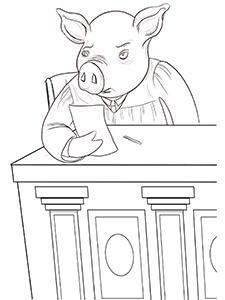 In his first inaugural address (1861), referring to the constitutional questions that were then tearing the republic asunder, Lincoln said:

I do not forget the position assumed by some that constitutional questions are to be decided by the Supreme Court. Nor do I deny that such decisions must be binding in any case upon the parties to a suit as to the object of that suit, while they are also entitled to very high respect and consideration in all parallel cases by all other departments of the Government [by which Lincoln means the executive and legislative branches]…

At the same time, the candid citizen must confess that if the policy of the Government upon vital questions affecting the whole people is to be irrevocably fixed by decisions of the Supreme Court, the instant they are made in ordinary litigation between parties in personal actions, the people will have ceased to be their own rulers, having to that extent practically resigned their Government into the hands of that eminent tribunal.

The history of judicial review is full of awkward surprises, and dissenting testimony from some of the most beloved figures of U.S. history, but I would say the controversy has mostly disappeared.

Most Americans accept that the Supreme Court has the “supreme” final word on the meaning of the Constitution. But We the People are getting kind of cranky about it.

As I mentioned a few installments back, the approval ratings of the Supreme Court is setting record lows, and a large portion of Americans think partisanship and political ideology affect the court’s rulings more than some neutral legal analysis (which, if you think about it, sort of undermines the basic premise for allowing the least democratic branch to trump the policy prescriptions of the elected branches).

Of course, much as the myth that binds us may require us to believe it, the Supreme Court is not really a politics-free zone. After all, the justices are nominated by the president and confirmed by the Senate. The perception that the nominations and confirmations have become increasingly partisan, ideological and political is one of the perceptions undermining the myth. That’s where the next installment of this never-ending rant against all that decent Americans hold dear will pick up.