MinnPost’s Beth Hawkins put up an interesting piece Tuesday, on the 150th anniversary of the Gettysburg Address, outlining the arguments about how President Lincoln’s speech should be taught in public schools. I took it as a welcome tour of the unwelcome battle over who gets to decide how our teachers should be required to indoctrinate our children on the sacred texts of U.S. history.

I (and even my kids) are out of high school and relatively free to think such thoughts as we may about such matters. In my dotage I’ve often been struck by the mystery of what Mr. Lincoln was arguing in his very brief secondary remarks (the main speech by  pastor/politician/orator Edward Everett lasted two hours) at the dedication of a cemetery to the fallen soldiers from the bloody and crucial battle of Gettysburg.

Lincoln’s talk lasted just a few minutes and was panned by some of the early reviewers, at least one of whom has recently apologized. And Lincoln definitely got one thing wrong, when he said: “The world will little note, nor long remember what we say here.”

In fact, what he said there has become the most famous speech in U.S. history.

It’s hard not to love the poetry of the address, and there’s no reason to try. It’s also hard to look at such a revered speech with fresh eyes. But, other than honoring the fallen (including many Minnesotans who had fought heroically at that battle) and pledging to keep trying to win the Civil War, it’s hard to figure out the argument hidden within the poetry. It seems to be something like this:

Four score and seven equals 87 years, which leads to 1776, the year of the Declaration of Independence, which is what Lincoln refers to when he says that a new nation was “brought forth, upon this continent, conceived in liberty and dedicated to the proposition that all men are created equal.”

That “all men are created equal” was the first of the “self-evident” truths that Thomas Jefferson summarized in the second paragraph of the Declaration. Slavery, it seems obvious to us now, should have no place in a nation dedicated to that proposition. And yet it wasn’t obvious then. For 87 years after a new nation was conceived and dedicated to that proposition, slavery had continued, even after it had been abolished in much of the rest of the world.

The Civil War, Lincoln said, is a test of “whether that nation, or any nation so conceived and so dedicated, can long endure.” So perhaps that translates as: A nation dedicated to liberty and equality cannot indefinitely remain the last bastion of legalized human slavery.

Obviously, in 1863, the slaveholders of the South didn’t accept that the Declaration required an end to slavery. The Declaration was written by Thomas Jefferson, a slaveholder with conflicted feelings about the institution. The southern states that had ratified the U.S. Constitution in 1787-88 would never had done so if they had believed that it foretold a future without slavery. The slave state delegates to the Constitutional Convention of 1787 went to lengths to insert and insist upon constitutional provisions that perpetuated the rights of slaveowners.

In 1858, as a Senate candidate in Illinois, Lincoln had said that:

I have said a hundred times, and I have now no inclination to take it back, that I believe there is no right, and ought to be no inclination in the people of the free States to enter into the slave States, and interfere with the question of slavery at all.

Lincoln had not run for president in 1860 as an abolitionist (and, in fact, no abolitionist could have been nominated or elected). Until briefly before the Gettysburg Address, Lincoln had always insisted that the Constitution included no power for the federal government to abolish slavery in the states where it had long existed. 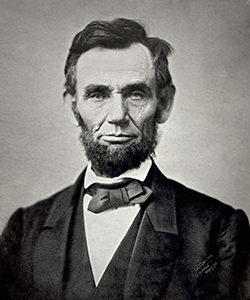 But Lincoln had been on board with the general Republican Party position that no more slave states should be admitted to the union, and that the belief that by this means slavery could be put onto a “path of ultimate extinction.”

But just before the passage about government of, by and for the people, Lincoln said that the cause for which the dead soldiers buried nearby had given “the last full measure of devotion” had been to “give … this nation, under God, … a new birth of freedom.” Surely the new birth of freedom meant the end of slavery. The Civil War years had changed the North, abolitionism was no longer a radical, politically suicidal premise, and, although Lincoln had still not come out in favoring of abolishing slavery, by the time of Gettysburg he was heading that way.

Less than a year before Gettysburg, Lincoln had issued the Emancipation Proclamation, which certainly moved slavery closer to extinction. But he justified the proclamation as a war measure, necessary to weaken the rebel states. It left slavery legal in the slave states that had not seceded and Lincoln had warned the Confederate states that it was coming, attached to an offer to allow those states to keep their slavery if they would end the rebellion. None had taken him up on the offer.

That was the legal state of play when he went to Gettysburg and, technically, it was the same after he spoke.

But his argument at Gettysburg — not technical nor legal nor easily reconcilable with history or his own past statements, but moral and perhaps reflecting how the war had changed him — was that the words put into the Declaration by Jefferson had contained a time bomb. Whatever those words had meant to those who read them in 1776, and however many times Lincoln had tried to convince the South that they had nothing to fear from him, “all men are created equal” in the preamble of the Declaration of Independence now meant that slavery ultimately had to end. And that the time for its end was drawing nigh.

What did Lincoln argue at Gettysburg?