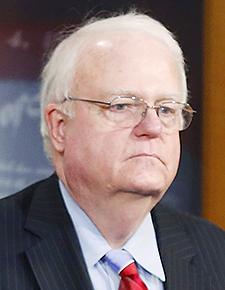 We don’t get too many congressional issues these days that shatter the general party-line voting phenomenon, but in the aftermath of the Edward Snowden revelations, privacy may be one of them.

Congressman James Sensenbrenner, a conservative Wisconsin Republican and former chair of the House Judiciary Committee, and Sen. Patrick Leahy, a liberal Vermont  Democrat and chair of the Senate Judiciary Committee, have joined forces to sponsor what they call the USA Freedom Act. The Freedom Act would seek to end the bulk collection of personal data — like the massive phone-call data-collection operation that Snowden revealed.

Sensenbrenner, who has been in Congress since 1979, was in Minneapolis Tuesday and spoke about the Freedom Act at the University of Minnesota’s Humphrey School.

Substantial support for the bill exists in both parties in both chambers, but the same is true for opposition to it, which is led by Sen. Dianne Feinstein, a liberal  California Democrat and chair of the Senate Intelligence Committee, and Rep. Mike Rogers, a conservative Michigan Republican.

Sensenbrenner, who has a serious hard edge to him, said the two Intelligence chairs have “turned themselves into cheerleaders for the NSA (National Security Agency).”

He declared himself “sick and tired” and hearing that the country has to choose between privacy and security. “I think we can have both,” he said. But the NSA thinks the way to strike the balance between the two is to “completely ignore” privacy and to run roughshod over the Fourth Amendment right of Americans to be secure against unreasonable searches.

People who give no weight to the privacy rights of Americans when those rights come into conflict with the goal of preventing terrorism are creating “the precursor for turning this country into a totalitarian state.”

Ironically, Leahy and Sensenbrenner also teamed up to sponsor the USA Patriot Act in the aftermath of the Sept. 11, 2001, attack. (In fact, their name for their new bill, the USA Freedom Act, seems an obvious play on their previous collaboration.) Liberals tend to think the Patriot Act led to the kind of excessive government spying on its own citizens that Snowden revealed. Sensenbrenner disagrees. He believes the Patriot Act has been misinterpreted and abused.

The Patriot Act was not intended to allow the bulk collection of data on citizens whom the government had no reason to suspect were involved in terrorist activities, Sensenbrenner said. He said was not aware that the government was engaging in any such bulk collection until the Snowden revelations. And if he had known how the Patriot Act (of which he was the chief House sponsor) was going to be used, he would have voted against it himself, he said Tuesday.

When the Patriot Act was reauthorized in 2005, language was inserted allowing the NSA to collect data if “there are reasonable grounds to believe that the tangible things sought are relevant (emphasis added) to an authorized investigation.”

When the bulk-data collection began — without public discussion and without the knowledge of most members of Congress, Sensenbrenner said — the administration convinced the FISA Court  (with no adverse parties present to make a counterargument) that the bulk-data collection was authorized under the Patriot Act so that the administration could look through the data to see whether anything in it might be “relevant” to an investigation of terrorist activity.

Sensenbrenner is outraged at this abuse of the provision requiring a finding of relevance. He brought it up five or six times in his talk Tuesday. At one point (did I mention he has a feisty side?) he said: “Any one of us who tried to use that definition of ‘relevance’ when we were in the third grade would still be in the third grade.”

The Freedom Act would bar the collection of bulk data. It would open up the FISA court so that the judges could hear arguments on both sides of an issue.

Sensenbrenner was asked whether he considered Snowden to be a hero or a traitor. He’s not a traitor, Sensenbrenner said, since that word has specific legal meaning that doesn’t fit what Snowden did. He’s not a hero because he has compromised the intelligence operations of the U.S. government. He is a “criminal,” and should come home and stand trial for his crimes.

And he said something similar about James Clapper, the director of National Intelligence, who was asked during sworn 2013 testimony before the Senate Intelligence Committee whether the NSA collects data on millions or even hundreds of millions of Americans. “No,” Clapper said. “Not wittingly.” Clapper later defended the answer as the “least untruthful” thing he could think of to say.

Clapper still has his job, but Sensenbrenner said Clapper “ought to be fired and he ought to be prosecuted” for lying under oath to Congress.