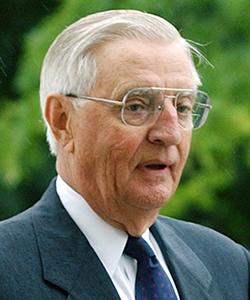 As one of the leading members of the famed Church Committee on intelligence activities in the mid-1970s, then-Sen. Walter Mondale thought long and hard about how to strike the balances between the needs of the CIA to do its work, the demands and limits imposed by the U.S. Constitution and international law, and of the dangerous temptation to cross the line into torture and cover-up. So it seemed worth checking in with the former vice president for reaction to the most recent Senate committee to investigate similar matters.

“The Church Committee [which was chaired by Sen. Frank Church and investigated intelligence gathering following various Watergate revelations] tried to lay out the competing ideas, checks and balances, separation of power, the need to both have secret operations and nevertheless retain accountability of the intelligence community to the Congress and the people,” Mondale said. “It seemed that those principles were really sustained pretty well until 9/11, which generated so much fear. And some people used the fear to suggest that all those things could be removed, and had to be removed, and we should simply have secret unlimited authority for the CIA and the NSA [National Security Administration] to do whatever they pleased.”

There were people in Congress who knew what was happening, including who thought the truth had to be put on the table, Mondale said, but that impulse kicked off “this long six-year struggle, all the partisan division that went with it, before we could get a report out, and even then with all kinds of reluctance.”

“Nevertheless,” Mondale said, “an excellent report” that laid the groundwork for Intelligence Committee Chair Dianne Feinstein and Sen. John McCain (not a member of the committee, but a leading Republican voice on national security issues) to “reasserted the idea that America is determined to work within the law.”

“I’m really thrilled with what they did, even as I am anxious about how long it took and the untidy way that the results were finally reached and published and — more than that — troubled by the CIA statements that it did nothing wrong and that we should be prepared to repeat the same measures if they deem it necessary.”

Mondale completely rejected the CIA argument, supported by most Republican senators, that a line was carefully enforced to make sure the “enhanced interrogation techniques” wouldn’t cross the line into “torture.”

I asked him if he had any doubt whether the line was crossed into torture. He replied: “I don’t think there’s any argument about that,” and Mondale. He cited the similar conclusion of McCain, who Mondale said, “really knows what he’s talking about on that.”

Mondale singled out former Vice President Dick Cheney as one who is defending the “enhanced interrogations” and CIA Director John Brennan, who also defended the practices. He said the failure to hold any executive branch official accountable, even by merely the loss a job, sent the wrong message into the future.

“If you don’t settle these things in a way that leaves lines clear, it’s like leaving a loaded revolver on the kitchen table,” Mondale said. But the situation is nonetheless better than it would have been without the publication of the committee report.