As regular readers of this space know, I’m a history nerd. I believe it’s fun and sometimes valuable to pass along historical context, like last week when I wrote about the fact that the business of presidential nominees accepting their nominations with a speech at the convention dates back only back to the 1932 and, for the Republicans, only to 1948.

Pretty much the same goes for the business of presidential nominees choosing their running mate. Nowadays, once a candidate has locked up the presidential nomination, we expect them to choose their running mate by whatever process they choose to employ, introduce him (or, in two recent cases, her) to the public a few days before the convention, and we all understand that the convention will rubber-stamp that choice, and the veep nominee will make a televised speech, which will occur on Wednesday night, the third day of the four-day TV show that conventions have become. So it happened, in the case of both parties, this year and Mike Pence and Tim Kaine were rolled out exactly this way. Kaine’s big speech was last night and Pence’s was the previous Wednesday night.

In the earliest days of the Republic – and this was the way the Framers of the Constitution intended it – whoever finished second in the Electoral College voting would become vice president. That’s how John Adams, the first vice president got the job. Even as the two-party system (which is not mandated by the Constitution) developed, that remained the case, which is how Adams (when he succeeded George Washington in 1796) ended up with his chief rival in the presidential race (Thomas Jefferson) as his vice president.

Jefferson spent his veep term preparing for a rematch with his, technical, boss Adams, a rematch that Jefferson won but he won it in such a crazy fashion, wherein he almost lost it to his own running mate, that an amendment (the 12th) was rushed through to prevent that from ever happening again, and it never did.

1832: Choice left to the convention

But as the two-party system developed, and the tradition of party conventions to choose the party ticket (starting with the Democratic convention of 1832), the choice of the vice presidential nominee was left to the convention. For most of the next century, we had this strange custom (to which I alluded the other day) in which the presidential contenders were expect to stay home, evince a modest disinterest in gaining office and wait to be notified whether they had been nominated.

The vice presidential nomination was made, usually on the last day of the convention, by the delegates under the guidance of the party bosses. They were often motivated by concerns of party unity, regional balance, rewarding particular factions. Running mates were, in some instances, absurdly unqualified to be president.

It would be hard to top Chester A. Arthur, who, before he was placed on the Repub ticket as James A. Garfield’s running made in 1880, had held no public position higher than inspector of the port of New York, a position famous for making its occupant wealthy through graft.

Roosevelt has his way

This tradition remained in place until 1940, the year Franklin D. Roosevelt won his unprecedented third term.  FDR’s running mate during his first two terms was former Speaker of the House John Nance (Texas Jack) Garner, who had been chosen, eight years earlier, by the convention, in the usual way, without FDR’s input. 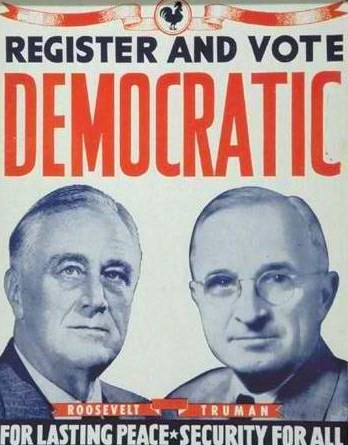 Most Democrats believed the popular FDR could be re-elected and wanted him to run. He refused to say whether he would. According to Moe, he would be willing to step aside if he could be replaced by a Democrat who could win, who would be committed to preserving the New Deal and who would steer U.S. foreign policy away from the isolationism that had characterized it for much of its history to an active role in saving Britain and making sure that Hitler wouldn’t take over Europe.

He didn’t like or trust Garner to be that guy. Garner had begun a campaign for the nomination, without FDR’s support or approval, so that didn’t help. Without indicating clearly that he was willing to accept a nomination for a third term, and without being present at the convention, in Chicago, FDR allowed his lieutenants to spread the word that he wanted his agriculture secretary, Henry Wallace, to be nominated for vice president. Wallace was a brainy, enthusiastic New Dealer but he was viewed (accurately) as far left on the ideological spectrum and not any kind of proven vote-getter.

On the first ballot of the vice presidential selection process, Wallace was trailing. Roosevelt (who was listening to proceedings on the radio) drafted a letter to the convention saying that if he couldn’t have Wallace, he would decline the nomination for the top spot. The letter wasn’t sent, Wallace was nominated and this was the beginning of the new normal in which the presidential nominee chooses his own running mate.

Wallace continued to weird out the party regulars and, in 1944, when FDR was renominated for a fourth term, the party bosses persuaded FDR to let them nominate Harry Truman, which turned out to be a pretty big deal, since FDR died early in his fourth term.

In all cases since, except one, the presidential nominee has made the choice. The exception was 1956 the Dems nominated Adlai Stevenson and Stevenson voluntarily allowed the convention to pick his running mate. It took three ballots before the convention chose Tennessee Sen. Estes Kefauver. Of both local and historical note, the two others who sought the nomination were young Massachusetts Sen. John F. Kennedy and our local hero, Hubert Humphrey who would, of course, later become vice president.

No Republican presidential nominee ever made public whom he wanted on the ticket (except in cases where it was the incumbent veep, as when Ronald Reagan made it known in advance that he was keeping his first-term partner George H.W. Bush), until 1996, when Bob Dole announced preconvention that he wanted Jack Kemp as his running mate.