One of the overriding themes of Night Two of the Republican convention is that Hillary Clinton is a criminal who should be in prison. Perhaps you already know that the crowd eagerly seizes every opportunity to chant “lock her up.” “Her” is Clinton.

There’s something quite disturbing about this. There have been faux democracies where, if you lose an election, you may get thrown into prison. I hope we are not becoming one of those kind of democracies.

Chris Christie, in the speech that got the most raucous reaction, actually asked the assembled Repubs to vote Clinton “guilty” or “not guilty” on eight different “charges.” These were mostly not actual criminal charges, but metaphorical ones, like being such a poor secretary of state that her failures could be considered “crimes.” He introduced the shtick of finding Clinton guilty by saying, “Let’s have some fun tonight.” But I absolutely do not doubt that a huge portion of Republicans believe that Clinton has committed literal crimes for which she should be locked up, notwithstanding the end of the official investigation into her email practices.

(If you missed this Christie shtick and want to see it, it’s available here.)

I don’t doubt that something similar will occur next week in reverse. I can easily recall a time when most major party politicians maintained a tone of studious civility, bordering on respect, when discussing their opponents in public.

It is often said (and there’s really no disputing it, if you think polls measure such things) that there’s never been an election pitting two such disliked and mistrusted candidates. You could say that’s about things that are actually known or believed about Trump and Clinton. But it’s more than that. This level of polarization is dangerous, and no one seems to have a serious idea of how to move back in the direction of at least feigned respect.

Speaker Paul Ryan took a step in this direction last night, as he generally does. On tone, he’s pretty Old School, which I appreciate. But he did make a reference to the “other [unnamed] party” as the force in our politics that is trying to divide Americans by race and class and gender and ethnicity.

He suggested that Republicans have coherent detailed plans on taxes and health care that I’m skeptical they actually have. He called for “a reformed tax code that rewards free enterprise, not just enterprising lobbyists. A reformed health-care system that operates by free choice instead of by force.” 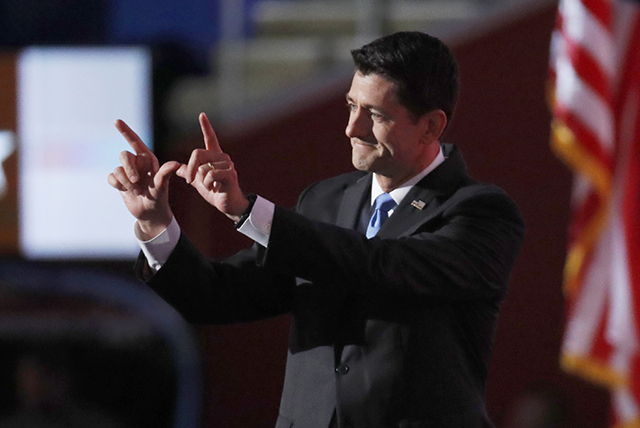 Ryan has talked for years now about a Republican plan to repeal and replace Obamacare, and there are some ideas in existence but – even though Republicans control the House and have voted to repeal the Affordable Care Act many times – the Republican caucus has never produced a bill that could be scored fully so the country might learn how much their alternative plan would cost and how it would be paid for, how it would work, what would be covered, and how many people would gain or lose health insurance.

Still, Ryan comes a lot closer than Trump ever has in outlining the plans for which he would advocate. Ryan, who has long said he will support Trump but only because he views a Trump presidency as preferable to a Hillary Clinton presidency, managed to get through his 12-minutes-plus talk and mention Trump’s name just twice.

You can watch Ryan’s whole speech at the bottom of this link.

The weirdest presentation of the evening was by neurosurgeon Ben Carson, who was briefly a front-runner for the Republican nomination. How weird? Carson made a very weird effort to link Clinton to some kind of devil worship. Yes, weird as it sounds, you read that right.

Carson said that, as a college student, Clinton had admired the radical community organizer Saul Alinsky, who wrote a famous book called “Rules for Radicals.” It turns out that in the introduction to that book, Alinsky acknowledged Lucifer. So, Carson asked the assembled Republicans:

“Do we want as our president someone who has a role model who is someone who acknowledges Lucifer?”

Seems a tad desperate to me, but what do I know? Politifact did a fact-check on Carson’s claim and if you read that, you’ll know what you need to know.

The Commentariat generally seemed impressed with the talk by Donald Trump Jr., the magnate’s eldest child. And they seemed to think the youngest daughter Tiffany, who is just out of college, was sweet and helpful in humanizing the nominee.

And, speaking of the nominee, I almost forgot to mention: After a certain amount of last-minute drama over whether everyone who was pledged to vote for Trump had to do so, he did win the nomination and Mike Pence was unanimously (without a real vote) accepted as his running mate. Gov. Pence will speak tonight and the Donald himself on Thursday.