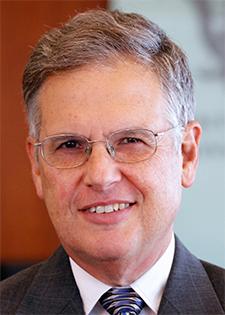 Joel Goldstein, the leading academic authority on the U.S. vice presidency, says his wife jokes that he is like some rare orchid that blooms briefly once every four years.

And so this is Goldstein’s season, when both of the major party presidential nominees have been chosen, and we, the politically obsessed, obsess briefly on the question of whom those nominees might or should or will choose as their running-mates. And we assume that Goldstein, a student of every vice president since John Adams, will tell us who will (or could, or might) be chosen for that honor by Hillary Clinton and Donald Trump.

In an appearance Thursday at the University of Minnesota’s Humphrey School of Public Affairs, Goldstein didn’t tell us. Not even slightly, although a few people asked. Instead, he reminded us that one of the great sons of Minnesota, Walter Mondale, turned the veep job into one worth asking about.

In his recent book, “The White House Vice Presidency,” Goldstein documented some of the many ways that the partnership of Mondale and Jimmy Carter changed the veephood dramatically and – it appears – permanently, into a job worth having and worth caring about.

And, to make the event extra special, Mondale joined Goldstein on stage and talked about how it happened.

U of M political scientist Larry Jacobs, of the Center for the Study of Politics and Government, who moderated the event, said, in introducing Goldstein, that the history of the vice presidency divides neatly into two periods: “before Mondale and after Mondale.”

The Mondale vice presidency, Goldstein said, “converted our most disparaged constitutional office into one of great consequence.”

The most insignificant office

According to Goldstein, Adams, the first veep, wrote home to his wife Abigail that “my Country has in its Wisdom contrived for me, the most insignificant Office that ever the Invention of Man contrived or his Imagination conceived,” one so lacking in power that “I can do neither good nor Evil.” When Sen. Daniel Webster was offered the veep spot on his party’s ticket he replied “I don’t propose to be buried until I’m dead.”

Of course there’s the famous Vice President John Nance Garner remark about the job (“not worth a warm bucket of spit”), but you all know that one, and I gather its authenticity is sometimes challenged. (Personally, I always assumed that if he said it, he said another word, that rhymes with spit.) Goldstein had a few other good ones, but you get the idea. Still, all of them come before the Carter-Mondale transformation of the office. And none of them would apply to the job as Mondale did it, which Goldstein said amounted to a role as “an across the board super-advisor [to the president] and troubleshooter.” 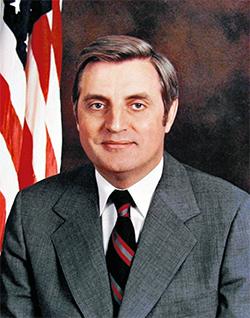 Coincidentally, Goldstein spoke yesterday on the precise 40th anniversary of the day Walter and Joan Mondale flew down to Plains, Ga., to meet with Jimmy and Rosalyn Carter and talk over the possibility of teaming up. The two barely knew each other. Carter would later say that he was leaning toward several other possible running mates. Mondale, who was an important and rising U.S. senator, was skeptical about taking the job if it was offered. But the two men connected, and Mondale ended up making a proposal for the kind of vice presidency he would accept. Carter said yes to every condition Mondale had suggested, and added one that Mondale hadn’t included: an office in the West Wing of the White House itself, which no veep had ever had. Note that Goldstein’s book is titled “The White House Vice Presidency.”

Mondale ended up helping the ticket. He participated in the first-ever vice presidential debate (versus Gerald Ford’s running mate, Bob Dole), which Goldstein said flatly that Mondale “won.” Carter strategists attributed several percentage points of the team’s popular vote to Mondale’s presence on the ticket. Apparently there were polls in which people were several points more likely to say yes if asked whether they support the Carter-Mondale ticket, as opposed to just asking whether they favored Carter for president.

In office, Mondale participated in a wide range of issues. Instead of sucking up to the boss, he became the member of the administration who could level with Carter and tell him things he didn’t want to hear. In fact, Goldstein said, other members of the administration whom he interviewed said they would approach Mondale for help when they needed to present Carter with news or views he wasn’t going to like.

Mondale served just one term as veep, but, Goldstein said, the change in the vice presidency that he wrought has affected every vice presidency since over nine subsequent presidential terms, with some ups and downs, but all of them following aspects of the Carter-Mondale working relationship and with none of the vice presidential irrelevancy that characterized the office from the Adams tenure to the vice presidency of Spiro Agnew under Richard Nixon and Nelson Rockefeller under Gerald Ford that preceded Mondale and Carter.

Said Goldstein (who, by the way, teaches at Saint Louis University School of Law):

All of Mondale’s successors have served as generalized presidential advisors and trouble-shooters. All have had frequent access to the president and his circle. All worked on an ongoing basis to advance administration objectives. And all did so by retaining the resources President Carter gave Vice President Mondale. The main purpose of the job is no longer to retain the constitutional function as first successor. It is rather to help the president make wise decisions and achieve the administration’s objectives.

During a panel in which Mondale and Goldstein took questions from Jacobs and the audience, Mondale was asked whether his mentor, Hubert Humphrey, who had traded in a fairly glorious Senate career for a fairly miserable and disrespected four years as Lyndon Johnson’s veep, had encouraged him to take the Carter offer or stay in the Senate where he was a rising star. Mondale said yes, he had consulted Humphrey, and that he “expected [Humphrey] to tell me: ‘Stay away from it. Don’t touch it.’”

But no, said Mondale. Instead Humphrey encouraged Mondale to seriously consider taking Carter’s offer because “you’ll learn more, you’ll gain more stature, you’ll be at the center of government more in the vice presidency in one week than you will as a senator in 10 years…”

Mondale took the offer, and said the experience turned out to be exactly as Humphrey said it would. And, according to the great academic expert on matters vice presidential, he also changed the history of the office.

And, if you can stand one last cutesy remark that I gather Mondale has been remarking for years, when he was asked how important it was for him to have an office in the White House, he replied: “Nothing propinques like propinquity.”