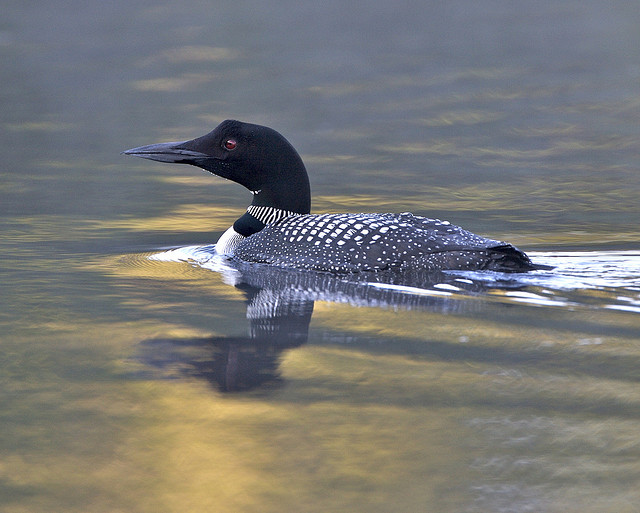 Yet another chapter in the war on birds. The AP, via the Winona Daily News, looks at a report just out from the Audubon Society saying climate change could affect more than half North American bird species, including the common loon: “Minnesota’s state bird could disappear from the state due to climate change, along with more than half of Minnesota’s other bird species, according to a study by the National Audubon Society. Other Minnesota birds at risk include the American white pelican, the trumpeter swan, the sharp-tailed grouse and the mallard duck, according to the study released Tuesday. The national study said the critical ranges of more than half the 588 North American bird species will either shrink significantly or shift over the next six decades or so, threatening their survival either way.”

Some good news on the lake front: Minnesota is at the forefront of the national effort to eliminate the zebra mussel. The Strib’s Kelly Smith reports: “Christmas Lake in Shorewood became the first in the nation Monday to use a new technology that utilizes dead bacterial cells to eradicate the razor-shelled creatures that can damage boat motors, slice swimmers’ feet and threaten fish populations. The outcome could be a defining turning point in what has been a losing battle to control an invasive species that has spread to 29 states.”

Looks like a particularly hairy Minneapolis mega-intersection may be getting a facelift. In the Strib, Eric Roper reports on the City Council Transportation & Public Works Committee’s approval of a planned redo of the Hennepin-Lyndale bottleneck: “Staff ultimately selected the second of two options displayed at an open house this summer, which would eliminate one northbound lane and nix some narrow single lanes that carve through medians for drivers wishing to make a turn. …It would also eliminate part of a southbound travel lane below the Walker Arts Center and tighten a curb near Dunwoody Boulevard. … ‘Pedestrians and bikes need to be more of a priority in this intersection,’ said council member Lisa Goodman, who represents part of the area. ‘And they have not been up until now. This has been a thoroughfare for cars for the most part. And bikes and pedestrians ought to watch out. Because if you don’t watch out you could potentially be run over. That situation has to change.’ ”

But how many jobs did they create? The SEC is accusing two Minneapolis-based hedge fund managers, Steven R. Markusen and Jay C. Cope, of cheating fund investors out of more than $1 million. Says Sital S. Patel in Marketwatch, “The fund invested in the thinly traded stock CyberOptics Corp., becoming its majority shareholder and investing as much as 75% of the fund’s portfolio in the stock. …The pair then tried to drive up the stock price on the last day of the trading each month by improperly placing buy orders on the stock seconds before the market’s close, said the SEC. The closing price was then used to calculate the fund’s returns and management fees as part of Archer’s report to investors. …The hedge fund had over $26 million in assets at the end of 2007 but by 2012 it had dropped to  $10 million, the result of poor performance and employee fraud, the regulators said.”

As the West African Ebola outbreak continues, its effects are far reaching. In the Minnesota Daily, Hailey Hansen reports on precautions being taken by the U of M and other universities: “The University has not canceled any study abroad programs, but it is requiring students who want to study abroad in affected areas to first receive approval from the University’s International Travel Risk Assessment and Advisory Committee, said Stacey Tsantir, director of International Health, Safety and Compliance for the University’s Global Programs and Strategy Alliance, in an email statement.”

Just give her the Nobel, already. Louise Erdrich, novelist, bookstore owner, Minneapolis resident, winner or enumerable prizes, is at it again. She just won the PEN/Saul Bellow prize. From the AP via the Washington Post: “The PEN American Center announced the award Tuesday as judges E.L. Doctorow, Zadie Smith and Edwidge Danticat praised the ‘awesome’ breadth of Erdrich’s work. ‘She is a writer only America could have produced, committed to the extraordinary project of capturing a complex land and a various people in their own voices, and in hers,’ the citation reads. Erdrich’s novels include ‘Love Medicine,’ ‘The Plague of Doves’ and ‘The Round House,’ winner of the National Book Award for fiction in 2012.”

Get Shaggy on the case. In the Pioneer Press: “A Minneapolis restaurant is offering a lifetime of free burritos to whoever identifies the vandal who spray-painted its catering van. World Street Kitchen owner Sameh Wadi said Sunday he’s gotten multiple leads and hundreds of retweets since announcing the unusual reward on Twitter and Facebook Friday. He says his staff found the white van covered in black and silver graffiti Friday morning.”

Tough allegations from Miss Montana 2013 about an MSU-Moorhead sorority. Inforum’s Josh Francis reports, “Sheridan Tihista, a 22-year-old senior at MSUM, said she believes her claims of bullying at the MSUM chapter of Gamma Phi Beta warrant shutting the chapter down. … Tihista claims she was booted out of the sorority after standing up for her ‘little,’ a freshman girl in the sorority she mentored. … ‘Those girls would slam doors in her face or stop talking whenever she entered the room,’ Tihista said. ‘They made her feel unwelcome in her own house.’ ”

There can be only one… world’s largest ball of twine. In The Atlantic, Tim Hwang goes very deep on “four giant twine balls claiming to be the ‘world’s largest’ [that] are arguably among the very best roadside attractions North America has to offer. … Unlike more singular sites of weirdo tourist kitsch, the giant twine balls are connected to one another through a distinct historical lineage. Their construction tells a story of how a specific regional idea arose, spread and mutated throughout the Midwest over the course of the 20th century.”

Many bird species — including loons — threatened by climate change