Have you ever had the experience of being so embarrassed for someone who has so completely stepped in it that you can’t even turn away from the scene? So it is with KSTP-TV’s Jay Kolls (and his managers) after last night’s report on Mayor Betsy Hodges flashing … “gang signs.” The hyper-liberal Daily Kos was one of the first national outlets to jump on it. Shaun King writes, “What you are about to read and watch is stranger than fiction. It’s so racist and so outrageous, that people are questioning whether or not it’s satire from The Onion. It’s real though, and that’s what is so shocking and heartbreaking about the whole ordeal. … Does the Minneapolis ABC affiliate KSTP not have a filter in which something that smells this bad gets flagged for poor journalism? Sadly, only racism allows such an ugly story and stereotype to be advanced about a young man who was clearly not flashing a gang sign with the mayor of Minneapolis. He deserves a public apology and heads should roll at this station for even allowing it to ever make it to the air.”

Paige Lavender and Nick Wing at Huffington Post say, “KSTP reporter Jay Kolls has defended the station’s interpretation of the photo, suggesting the point is actually a symbol of a local gang called the Stick Up Boys. Kolls did not immediately respond to a request for comment from The Huffington Post.” Video is available at both sites.

For Jezebel, Anna Merlan says, “Kolls also spoke to a retired cop, Michael Quinn, who told him, ‘She’s putting cops at risk,’ adding, ‘The fact that they’re flashing gang signs back and forth at each other, showing solidarity with the gangs, she’s legitimizing what they’re doing. She’s legitimizing these people that are killing our children in Minneapolis.’ Or… she’s…. pointing. The hashtag #Pointergate has blown up on Twitter, and another Daily Kos reporter, David Waldman, has responded to the controversy by merrily digging up reporter Kolls’ own ‘criminal record,’ namely a DUI arrest from 2007.” 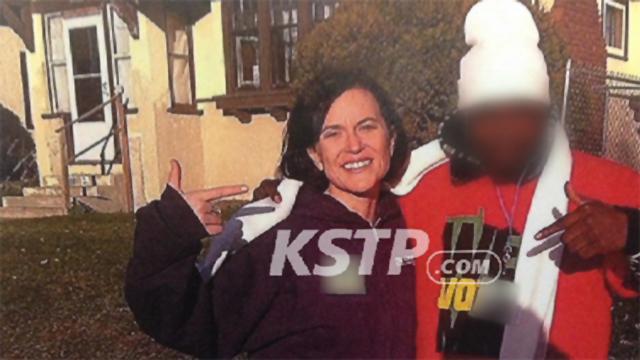 KSTP
The photo in question

In the International Business Times (!) Julia Glum writes, “#Pointergate was trending on Twitter Friday morning as people across the United States reacted with outrage and humor to what some are calling ‘the most racist news story of 2014’ … Gordon is a felon, twice-convicted, on drug selling and firearm possession charges. He is under supervised probation until 2016. For the past two years, Gordon has been a member of Neighborhoods Organizing for Change, a Minnesota charity aimed at fighting for racial and economic justice for low-income residents. Last weekend, the organization’s volunteers canvassed in Minneapolis along with the mayor and police chief, Janee Harteau.”

In Vanity Fair Kia Makarechi says, “Today from the file of stories that would be simply ridiculous if they didn’t reveal sad realities of life in America: during a get out the vote drive, Minneapolis Mayor Betsy Hodges posed for a photo with a black constituent, only to be slammed by local police as ‘throwing up gang signs.’ … Hodges had previously criticized the police force, and told residents that she was aware that ‘some officers abuse the trust that is afforded to them, and take advantage of their roles to do harm rather than prevent it.’ It appears as though some officers have found a way to strike back with an assist from KTSP, the ABC affiliate.”

For Talking Points Memo Brendan James says, “A Minnesota television station was met with widespread outrage and ridicule on Friday after it aired a segment claiming Minneapolis Mayor Betsy Hodges had recently flashed a ‘gang sign’ while standing next to a convicted felon. What the report left out: the photograph was taken during an event put on by the Twin Cities charity Neighborhoods Organizing for Change (NOC), and the young man, identified in the news segment simply as a ‘criminal,’ was a volunteer.” The story is so far beyond a mere “dog whistle” it’s a “dog siren.”

In a fast commentary of the Strib, Nekima Levy-Pounds, a professor at the University of St. Thomas Law School, writes, “My eyes could not believe what I was seeing, but not for the reasons one may think. I could not believe that any credible news station in the Twin Cities would produce a segment like the one in question and attempt to pass it off as legitimate news. After the story aired, many in our community took to social media, with the hashtag #pointergate to express their outrage. … The daily replaying of the narrative of blackness as evil, dangerous, and in the case of Mayor Hodges, contagious, has a cumulative effect on the American psyche and permanently warps our perceptions of the ‘other.’” Somehow I don’t think the “others” are the target demo for that kind of story.

Also at the Strib, Eric Roper reports, “Hundreds took to Twitter to lambast the story, which many said had racist overtones, under the hashtag #pointergate. Many also posted photos of celebrities with similar hand gestures, alleging sarcastically that they too were in a gang. Kolls defended the story in subsequent responses over the course of Thursday evening.” Some of these are pretty funny … if you’re not Kolls or KSTP.

KSTP’s official response to it all: “Law enforcement sources alerted KSTP-TV to a photo they believed could jeopardize public safety and put their officers at risk, especially given the recent increase in gang violence. Multiple sources from several law enforcement agencies told 5 EYEWITNESS NEWS the photo had the potential for undermining the work they are doing on the streets. 5 Eyewitness News blurred the individual’s face and did not name the group he was working for because police called into question only the judgment of Mayor Betsy Hodges.” Which, I think, is another way of saying, “We swallowed the internal cop politics strategy on this hook, line and sinker.”