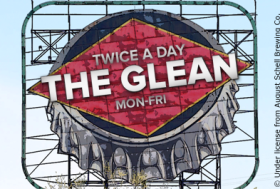 Never a good time for this but sheesh. WCCO reports: “A massive fire spread to several buildings in Minneapolis last night. … Crews were called to a building at 24th & Central Avenues in Northeast just before 5 p.m. The initial call was where El Taco Riendo restaurant and apartments are located. … The fire reportedly spread to neighboring buildings.”

Key part of the supply chain. The Fergus Falls Journal’s Brian Hansel reports: “A cold and windy March morning saw travelers rolling in and out of the Big Chief Truck and Auto Plaza for fuel, a rest break and maybe a cup of coffee or a snack – pretty much business as usual next to the busy Interstate 94. … The furor created by COVID-19 has wreaked havoc with the stock market, closed schools, universities, churches, government buildings, dine-in restaurants, bars, museums, salons, barber shops, movie theaters and gyms in this period of national emergency. It has had a paralyzing impact on millions of lives and led to panic buying, hoarding and mandates about staying home and avoiding large gatherings. … Yet the men and women who move freight are still trucking along. It is not something anyone wants to shut down.”

Another group needing help. The Star Tribune’s Kelly Smith reports: “Nonprofits in Minnesota and across the U.S. are asking for $60 billion in federal aid as they brace for a decline in donations due to the economic downturn during the COVID-19 outbreak. … Dozens of nonprofits said in a letter that they expect a drop in revenue and contributions just like during the 2008 recession, despite being on the front lines of helping people in need during the pandemic. In a letter to Minnesota’s congressional delegation on Thursday, the Minnesota Council of Nonprofits echoed the need for immediate federal aid.”

How an animal shelter is weathering things. MPR’s Marcheta Fornoff reports: “As Minnesota residents hunker down for another week of social distancing, some of them will be sharing their home with a new cat or dog — pet adoptions that may benefit other animals in the weeks to come. … On Sunday, the Twin Cities’ Animal Humane Society began a temporary closure to the public amid the coronavirus outbreak. But while adoptions are now on hold, it’ll continue to take in strays and other animals that have to be surrendered due to an emergency.”