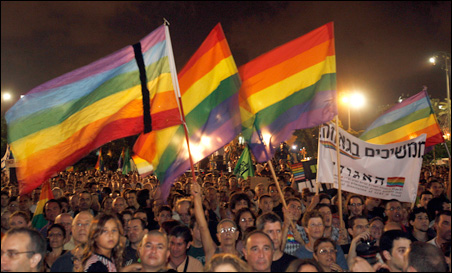 REUTERS/Ronen Zvulun
Israelis wave rainbow flags as they attend an Aug. 8 rally against the recent shooting attack in Tel Aviv.

TEL BARUCH, Israel — It may surprise you to learn that many Israelis are only now realizing they live in a violent place. And they’re freaking out.

Earlier this month, an as-yet unknown masked gunman shot down two men at a Tel Aviv gay hangout. Two women’s bodies were last week uncovered and chopped into pieces — one in a dumpster near Tel Aviv and the other in a river further north. This week, a landlady showing a potential tenant around a Jerusalem apartment was stabbed to death by the man she intended to evict.

But the biggest headlines were for the beating death of Aryeh Karp on the Tel Baruch beach, just north of Tel Aviv. Last weekend, Karp’s daughter was harassed by a young Arab man from a town near Tel Aviv. Karp warned him off, but the youth called some drunken friends over. A group of eight Arab men and two Russian women chased Karp along the boardwalk and kicked him repeatedly in the head. He was found dead on the beach soon after.

The shock among Israelis was as much for the location of Karp’s death as it was for its violent nature. The beach, particularly to Tel Avivians, is a refuge from the bustle and general craziness of Israeli society.

Just how crazy the country has become is at the heart of the chest-beating opened up by a few weeks of violence. Israelis have long bragged to foreigners that — apart from the terrorism — Israel is a very peaceful place where typically children can wander towns without parents worrying and anyone can go anywhere at night without feeling threatened.

Israel’s police chiefs maintain that this image is correct. The crime rate, according to a police official, is at its lowest since 1996. Break-ins and car theft are both down more than 20 percent, though that could be explained in large part due to the security barrier around the West Bank. (Burglary and car theft inside Israel were popular with Palestinian criminals, who can no longer cross the network of walls and fences separating them from Israelis.)

One politician from the largest parliamentary party reckons the police are cooking the books to make themselves look more effective. Yohanan Plesner of the Kadima Party accuses the police of categorizing violent crimes under less scary names. Thus, someone robbed by a menacing mugger is entered into the police’s crime statistics as nothing more than a stolen wallet.

Certainly it’s rare to see Israeli police patrolling as cops do in U.S. cities. They always seem to be going somewhere. As for pounding the beat, the only time you’ll see an Israeli cop outside his car is when he’s checking the identity documents of an Arab.

The one time I’ve had to report a crime against me here was some years ago when a man leaned out of his car late at night on the Jerusalem-Tel Aviv highway and started smashing the side of my car with a police night-stick. I called the equivalent of 911 from the car and was asked, “Was he an Arab?”

When I responded in the negative, I was told to come to the police station and file a report. I waited two hours at the station in Jerusalem’s Russian Compound to do so. Some weeks later, I received a form letter informing me that further investigation was “not in the public interest.”

Most commentators trying to make sense of the increase in violence point to the growing complexity of Israeli society. In the case of Karp’s murder, it seems disaffected children of Russian immigrants mixed with disaffected young Arabs. Add drugs and alcohol, and you have a murder, the explanation goes.

But there’s also an unrestrained non-physical violence that’s prevalent in daily exchanges with Israelis. It’s a society in which the aggressor generally wins.

Alongside the articles and radio spots about violent crime, the media has featured frequent comments from people who were forced by threats to sign over property rights to thuggish neighbors or who were told by the police that minor crimes weren’t worth pursuing. Moving from aggression to actual violence may not be such a big step.

It isn’t only in violent crimes that Israelis feel their society’s morality slipping away. The country’s most sacrosanct institution, the army, was tainted this week, when a soldier at the main Tel Aviv military base stole the credit card number of the chief of staff and sold it to an Arab, who racked up $500 in charges. The soldier also sold the Arab a couple of assault rifles. Under interrogation, he said he wasn’t the only soldier on the base who possessed the army chief’s card number.

At the Tel Baruch beach this Wednesday, there was no sign of a police officer. Bathers at the beach appear to be experts at ignoring things around them. They ignore the lifeguard, who barks into his loudspeaker constantly about the risks of shifting sands and rip tides, warning swimmers that they’re too far from the designated bathing areas. They ignore the noisy planes landing at Sde Dov Airport, which has its main landing strip just across the beach’s small parking lot.

And now they are struggling to ignore a murder.

Israel grapples with a new violence