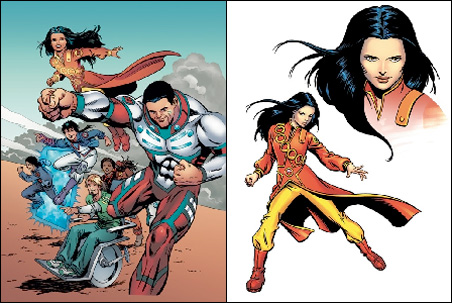 Teshkeel Media Group
Left, a cover shot of an early edition of “The 99,” at right, the character “Noora the Light.”

SAN FRANCISCO — The animated creations of Kuwaiti cartoonist Naif al-Mutawa wear dashing, body-hugging outfits, though nothing like the super-tight tights and flamboyant capes so prominent in franchises like “Watchmen” and “Batman.”

Yet Mutawa’s creations “Noora the Light” and “Jabbar the Powerful” are so popular in the Islamic world that they are set to appear in their own TV series, joining “The Simpsons,” “The Boondocks” and other cartoon titles that have made the jump from the printed page to the television screen.

His TV breakthrough moment comes six years after a cab-ride epiphany that gave birth to the idea, and three years after his — indeed, the world’s — first Islamic-inspired superheroes emerged in print. Collectively, Mutawa’s heroes are known as “The 99,” a title that references the 99 names that Muslims have for God. A Kuwaiti national, and a clinical psychologist with three master’s degrees and a doctorate (“I’m the only licensed psychologist in Kuwait”), Mutawa created his series to showcase the positive aspects of Arab and Muslim culture and Islam’s historic embrace of other religions’ intellectual traditions.

Noora, Jabbar and their fellow crime-busters aren’t depicted as a group of devout Muslims but as secular do-gooders from 99 countries who use the hidden power of special Baghdad gemstones to make the world right again.

“The 99” is Mutawa’s synthesis of East and West — the reflection of a 38-year-old man who was born and raised in a religious household in Kuwait City but who went to college in the United States and still spends part of each year in New York City. Many of the people who help Mutawa write and draw “The 99” are U.S. comic-book authors who’ve also worked on “Spider-man,” “Batman” and other mainstream titles.

“The series is very much based on global storylines,” says Mutawa, sitting at a Starbucks coffee house in San Francisco before heading off to address an Arabic culture group. “The gemstones (represent) Islamic knowledge, Christian knowledge, Jewish knowledge and knowledge from the Greek philosophers — from collective civilization.”

More than 500,000 copies of “The 99” are sold each year, and the comic is syndicated to newspapers in Kuwait and Saudi Arabia, where it was initially banned.

Muslim clerics believed that the comics were antithetical to Islam since the human superheroes take their names (like “The Powerful” and “The Light”) from those attributed to Allah. Plus, “Noora,” “Hadya the Guide” and many of the other crime-fighting women in “The 99” don’t wear hijab or other conservative religious garments.

Mutawa has swayed Muslim critics with his view that “The 99” is an affirming outgrowth of “Islamic archetypes.” (To get into the Saudi Arabian market, it didn’t hurt that a prominent Islamic investment bank — on whose board sit seven Muslim scholars — gave al-Mutawa its blessing by investing $18 million in  “The 99.”)

For such fans as Blake M. Petit, a high-school teacher and comic-book columnist in Ama, Louisiana, “The 99” is an ideal blend of thrilling, superhero adventures and Arab and Muslim culture. The series’ first issue, for example, originates the gemstones at the famous Baghdad library (Dar al-Hikma) that the Mongols sacked in 1258. In Mutawa’s reimagining, a modern-day foundation — led by a Unesco official named Dr. Ramzi Razem — enlists Jabbar and other “gem-bearers” who’ve been transformed by the stones’ ancient power. An evil nemesis named Rughal is also after the stones and their incubators.

“The thing that really appeals to me is that it’s very classic superhero storytelling that’s appropriate for all ages,” Petit told GlobalPost. “I enjoy the backdrop that comes from Arabic or Islamic culture, but it’s not a comic book about ‘Islamic superheroes.’ It doesn’t cross that line … where it starts to preach. That’s to me when it would lose my interest. But the backdrop is rich. And it’s more about the plot and characters than it is about the setting.”

Mutawa had previously written a children’s book, “To Bounce or Not to Bounce,” that taught children to understand different cultures. While training as a clinical psychologist, he worked at Manhattan’s Bellevue Hospital in its survivors-of-political-torture program.

Weeks before his fateful cab trip, Mutawa graduated with an MBA from Columbia University. “I was in the cab with my mother and sister, going from Edgware Road to Harrods,” Mutawa recalls, “and my sister turned to me and said, ‘I remember you told me you’d go back to writing after school.’

“I shrugged her off and said, ‘For me to go back now, it’s got to be a concept that has the potential of ‘Pokemon.’ I have my Ph.D. and three master’s degrees. Otherwise, it won’t make sense for me.’ It worked — she shut up. But because there’s now a vacuum in silence, I look out the window and started thinking.

After writing his “99” character guide, Mutawa began raising money to fund what is now Teshkeel Comics. Endemol, the Dutch-based entertainment company that’s responsible for such global hit shows as “Big Brother” and “Deal or No Deal,” is co-producing and co-financing “The 99” television series, which will be distributed not just in the Middle East but Asia and (Mutawa hopes) Europe and the United States.

Negotiations with broadcasters are still being finalized, though “The 99” should be on select TV networks by the end of this year, Mutawa said. Earlier this year, a “99” superhero theme park opened in Kuwait. The franchise’s potential is what continues to draw investors to Mutawa’s door. When he considers how quickly “The 99” has caught on (in the Persian Gulf, it often outsells issues of “Spider-man” and “Superman”), Mutawa shakes his head in a kind of disbelief.

Asked if it was a dream come true, Mutawa replies:  “We’ve gone beyond dreams.”

“The 99,” an Allah-inspired comic wildly popular in the Islamic world, is set to make its TV debut