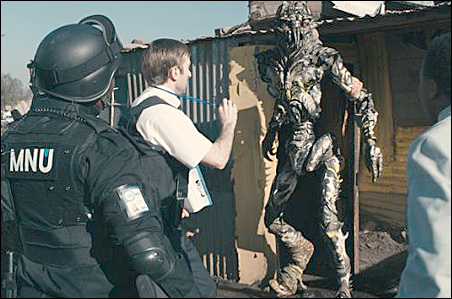 TriStar Pictures
The alien “prawns” from outer space are confined to shacks in a Johannesburg township in the movie “District 9.” Black South Africans who live in the township homes in Soweto hope that the attention from the movie will help them get better dwellings.

SOWETO, South Africa — For Solomon Baloyi, acting as an extra in the sci-fi film “District 9” wasn’t much of a stretch.

Baloyi played a security guard tasked with evicting aliens from their squalid shacks. In real life, he lives in that neighborhood. In fact, one of the helicopter scenes was shot in the clearing next to his makeshift house, in between the mounds of trash, scrub and tin shacks that make up the Chiawelo area of Soweto.

“District 9” is now a box office hit and images of Chiawelo have been seen by moviegoers around the world. The movie’s sweeping shots of the grim, grimy areas that are cordoned off for the aliens have inadvertently drawn attention to South Africa’s housing crisis. Fifteen years after apartheid, millions of black South Africans still live in squatter camps and are growing impatient for better living conditions.

In “District 9” Chiawelo is depicted as a place so dire that it is only fit for alien refugees who landed in Johannesburg from another planet. But for Baloyi, 47, it is the place where he has lived since 1987 when he built the tiny home from scraps and crumbling bricks.

“This place has been a nightmare,” said Baloyi of his neighborhood, not the movie. “There has been a lot of violence and also even children have been raped. Because of poverty people fight amongst each other.”

Baloyi and his neighbors see the irony of living in what was shown in the movie as only habitable for aliens, they say they feel lucky. They believe that the success of “District 9” will draw attention to the conditions they live in and put pressure on the South African government to help.

“My house is terrible … just look at this thing,” Baloyi said. Five people including an infant live in one room behind crumbling walls and broken windows repaired with plastic bags and packing tape. Cloth rags are stuffed into the crack under the front door, which has been hung upside down.

“The rags prevent the rats from coming in,” explained Baloyi. “There are many rats here. Big ones, just like a cat! They can kill you also, while you are sleeping.”

“District 9,” directed by South African native Neill Blomkamp, has reached blockbuster status with its mix of science fiction and themes drawn from the country’s apartheid history, as well as the more recent xenophobic violence in South Africa’s townships. The $30-million film has grossed more than $90 million so far and topped the U.S. box office on its opening weekend before going on to success worldwide.


“The film has actually brought some development in our lives,” said Baloyi. “The department of housing had forgotten about us. But after the film everyone is paying attention to how we live.”

But Balyoi is still waiting for his family to be moved into the government-subsidized housing that is provided for South Africa’s poorest citizens. There are long waiting lists for the brick, three-room “RDP houses,” nicknamed after the government’s “reconstruction and development program” that is providing them.

Since apartheid ended in 1994, the government has provided an estimated 1.1 million brick dwellings with running water, electricity and secure tenure for 5 million black South Africans. But the backlog of people needing decent housing is so great that a further 2 million to 3 million houses must be built, according to government figures.

“They said they were going to move us but now we have lost our hope,” Baloyi said. “We’ll see what happens, when it happens.”

Another Chiawelo resident, Thabang Thusi, 23, watched his neighbors move into government houses but is still waiting for his own. He has lived in his tin shack for 16 years — first with his parents, but after they died, alone — and has been waiting for years to be moved but says he can’t afford to pay a bribe to speed up the process. His mother was on a waiting list for five years but died before she was allocated a house.

Thusi’s shack stands in an area surrounded by the rubble of torn-down homes. There used to be many more shacks in the area, as seen in the crowded slum scenes in “District 9.” But many of the former residents have since been moved into “RDP houses” and their shacks removed.

“District 9” director Blomkamp said that Chiawelo residents began moving out of their shacks while the filming of “District 9” was still underway. This was a problem because Blomkamp wanted to show many shacks in certain scenes of the movie. As soon as residents moved out, others quickly dismantled the abandoned shacks to salvage the sheets of metal for use on their own homes. Blomkamp had to erect fences to preserve the shanties for the movie’s scenes. “So we ended up with this open piece of land with all these shacks on it,” Blomkamp said. “And the shacks would have been swept away very quickly if we hadn’t put up a fence to try and preserve them — in that part of the city everything just gets reused all the time.”

Thusi, who was hired by the “District 9” film crew to cut grass — many local residents were given small jobs on the shoot —  hopes that he will be in the next group to be moved and will for the first time in his life have a proper home.

“It’s very hard to live here because this shack is not stable,” he said. “When it’s raining, the water gets inside. The shack gets surrounded on the outside by water and it’s always difficult to survive. It’s not conducive to a healthy environment.”