News
Good Jobs
MinnPost’s Good Jobs beat is made possible by a grant from MSPWin, a philanthropic collaborative committed to strengthening the workforce in the Twin Cities metro area. MSPWin plays no role in determining the content of the coverage.
April 29, 2016

Whether it’s carpentry, roofing or flooring, Oscar Piña is confident doing any given construction assignment.

Indeed, Piña got his start in the profession at age 14, when his uncle hired him for window framing and tile laying projects in Mexico City homes and businesses. “I can do any construction work — framing, carpentry, painting,” he noted.

But one challenge has remained consistent during the time he’s been in the profession: Getting those assignments. In fact, during the eight years Piña has lived in Minnesota, he’s often seen weeks go by without a contract — a reality common among construction workers here who are long on carpentry experience but short on English-language skills.

Luis Polvoro, an immigrant from Uruguay, has had a similar experience: He spent years traveling around the country, bouncing from one contract job to another before finally moving to Minneapolis to be closer to friends in the trade.

“Finding construction contracts can be really difficult,” Polvoro said. “It’s even more difficult if you don’t speak English. It sometimes gets frustrating for me and for many Spanish-speaking workers in the field.”

Thanks to a new app, however, that difficulty could become much less of a barrier to finding employment. Developed by two Minnesotans, Queblo has created a bilingual digital hub that connect workers, contractors and homeowners across a language and cultural divide.

To access Queblo, which is available in both Spanish and English, jobseekers register through Queblo.com or via the mobile app, where they create a profile, which can include a resume and contact information. They can then choose the specific jobs of their interest within the building trades.

“You can search by trade,” said Igor Fridman, one of Queblo’s creators. “For example, if you’re looking for a specific company that does flooring or cabinetry or brick laying, you can find those opportunities — including the most recent ones in the city that have been posted.”

Construction firms are then able to find and connect with available workers in the database. Likewise, firms can post available jobs. Workers are able to register for free, but employers currently pay $10 to post an opening, though company leaders are expecting to increase the fee in the coming weeks.

The app comes out of the experience of its two creators: Fridman and Aleksey Polukeyev, both of whom came to the United States as immigrant children from Eastern Europe.

Born in Moscow, Polukeyev arrived in the U.S. in 2000 at age 10, following his software engineer father, who moved to Minneapolis for employment.

During his early years at Hopkins High School, he befriended Fridman, another immigrant, from Moldova, which broke away from the Soviet Union in 1990. Fridman was 4 years old when he arrived in the U.S. in 1993, escaping the political mayhem and economic depression in the region.

Last year, the two became business partners to create Queblo. “We both speak Russian and we understand the experience of a community in this country that might have barriers or that might have experienced a certain set of problems,” Fridman noted. “That’s why we were able to connect together and … focus on this other community.”

Before Queblo, Fridman worked in urban design and with architectural firms in Spain, where he was exposed to the building trades working on various residential building projects in Barcelona. 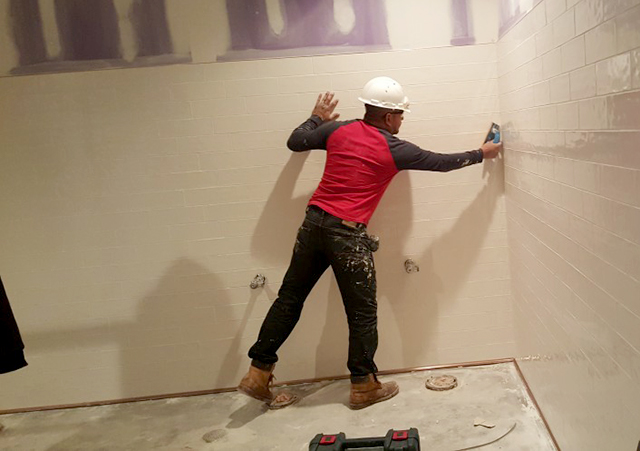 Courtesy of Queblo
During the eight years Oscar Piña, above, has lived in Minnesota, he’s often seen weeks go by without a contract

When he returned to Minnesota, he worked as a landscape architect in the Twin Cities’ suburbs. Both of those experiences inspired him to develop an app that would connect members of the construction community across the cultural and language divide.

“I got a good understanding of the building trades, how people work and how the system revolves,” he explained. “I had access with the language skills to work in this community. And I was also working as an architect here. I started hearing about the need [for workers] from contractors. A lot of the workers in the building trades are Latino, but they’re disconnected.”

Polukeyev added: “There is a disconnect that can be fixed with some kind of translation. Often times, the friction between them is just miscommunication. So, bridging that gap between them was really a key.”

Though the Queblo is relatively new, it’s already taken root in the Twin Cities — and the news continues to spread in the Spanish-speaking community. Many learn about Queblo through word-of-mouth, others through community newspapers.

Piña, for example, learned about it from a note affixed on a board in a Hispanic community hub, Mercado Central on Lake Street in Minneapolis.

When Piña registered, he was able to find a month-long carpentry job in Minneapolis. Today, Piña is still working with the contractor he met through Queblo on two projects: In Edina, he’s putting on window frames; and in Coon Rapids, he’s building a deck.

Henry Jimenez, the executive director of the Minnesota Council on Latino Affairs, sees Queblo as “an innovative and a great way” to connect workers and contractors in the building trades. But he also hopes that leaders of the company can find a way to connect worker to long-term jobs. 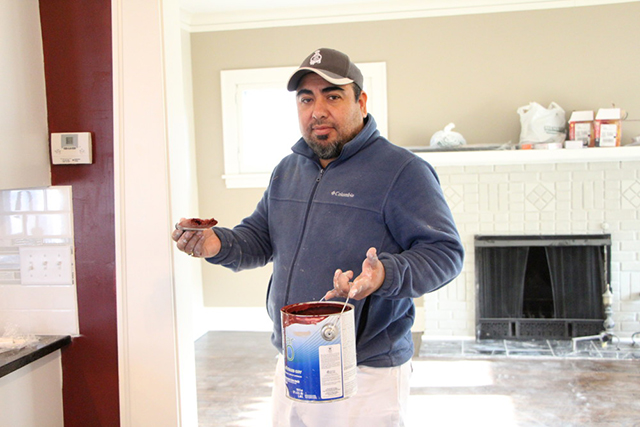 Courtesy of Queblo
Juan Martinez, a construction veteran of 20 years, is among hundreds of workers who have recently learned about the company through the newspapers.

“Latinos tend to work two to three jobs, which is higher than your average statewide, compared to other people,” Jimenez said. “I think it’s good to have folks connected to jobs, but I think it’s more important for folks to be connected to long-term employment.”

Juan Martinez, a construction veteran of 20 years, is among hundreds of workers who have recently learned about the company through the newspapers. Since then, Martinez said, the app has become his main source for new projects. “It made connecting to clients very simple,” he added. “Before, I had to go to temporary agencies. They stayed with some of the money I earned and they didn’t give me enough contracts.”