News
Good Jobs
MinnPost’s Good Jobs beat is made possible by a grant from MSPWin, a philanthropic collaborative committed to strengthening the workforce in the Twin Cities metro area. MSPWin plays no role in determining the content of the coverage.
Oct. 26, 2016

In 2013, Punch Neapolitan Pizza took a step that many companies wouldn’t — or couldn’t — take: It increased the minimum wage for all its workers to $10 an hour.

In January of the following year, Punch co-owner John Soranno found himself in Washington, D.C., where President Barack Obama introduced the restaurant chain to the nation during the State of the Union address and commended the entrepreneur for raising wages and calling on businesses across the country to follow suit.

Over the last several years, the minimum wage has been at the center of national debate, with proponents arguing that most of the current federal and state wages are too low to sustain families, and opponents arguing that a hike in wages will force businesses to close down and/or eliminate jobs.

For Punch co-owners Soranno and John Puckett, however, the decision to raise pay wasn’t political. It was simply a strategy to attract and retain quality workers who would, in turn, create a better experience for customers.

“We think people are the most important asset in our company,” Puckett said. “So, investing in people is really critical to our strategy of being the best high-quality pizza company. It seems very, very logical that if you want to be the best, your people should be treated the best.”

In fact, in 2015, the company bumped pay for entry-level employees again, to $11 — nearly $3 over the state’s minimum wage, and the results have been exactly what the owners hoped they would be. Over the past three years, not only has Punch increased its sales significantly, but the company — which has 350 employees at its nine restaurants across the Twin Cities metro area — has also seen an increase in job applicants and employee retention. In a few weeks, the company is set to open its 10th restaurant, this one in Vadnais Heights.

And once employees start working for the company, oftentimes they don’t leave, each year becoming more skilled and earning the chance to make more money. Today, 70 percent of Punch employees move beyond entry level within their first year of employment, and most Punch employees are earning between $12 and $13 an hour. That compares to between $8 and $10 per hour on average for most fast-food workers, according to a report from USA Wages.

Before the decision to increase wages, Puckett and Soranno studied some of the most successful companies in the retail and restaurant business in the country, Costco and the California-based In-N-Out Burger among them.

“The thing that we’ve noticed is that when we pay more than the market, it’s a fair exchange because when we’re paying more, we can expect more,” Puckett said. “So, for me as a business owner, I can expect the stores to be really clean, product quality to be really high, the customers to be served really well. It’s much more healthy to have realistic expectations.”

John Budd, a professor at the University of Minnesota’s Carlson School of Management, said that companies with higher wages often keep their employees longer, which reduces turnover cost and increases customer service. “There is the potential that they’ll attract high-quality workers; they’ll attract workers who are going to be more dedicated to the business and stay with the employer longer,” he added. “So, that reduces training costs. It’s time-consuming to be looking for new employees, interviewing them and training them. All those expenses can add up.” 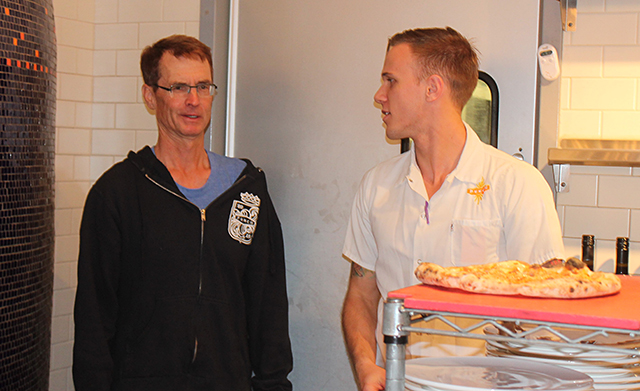 And Punch isn’t only thinking about its entry-level employees. As of Jan. 1, the company will unfold a new plan that will increase general managers’ salaries to $130,000, up from between $75,000 to $100,000. “Just like we did with our starting wage, we see a similar opportunity to make Punch stand out from a manager standpoint,” Puckett noted. “We are doing a few things to make that manager role the best in our industry.”

The company will also provide each general manager with a company car and a paid trip to Italy. “We’re investing as much in [the management level] as we’re doing for starting wage,” he said. “They are the types of jobs where they can send their kids to college, get a nice house, drive a nice car and start building a life.”

Not just the pay

Punch’s philosophy goes beyond pay, however. The company also offers employees structured training that prepares them to become skilled managers, cooks and customer servants — skills they can retain beyond Punch. “In order to have the best customer service and the best quality pizza and to maintain our employees … we need to teach them and train them to do their job the best way,” Nyquist said. “And they get compensated and rewarded for learning those skills.”

In recent years, senior leaders at the company meet with the employees twice a year to review their career goals and how they can advance. “The competitive nature of the Twin Cities economy right now is that you can go somewhere and get a pretty good starting wage in the industry,” Puckett noted. “But what Punch offers is a good starting wage and then the opportunity to make more money. That is not what everyone else can provide.”

The company has career path opportunities for employees who want to start from entry level to make it to a manager. Through its Punch University — located in the basement of a Punch store in St. Paul — the company offers quarterly pizza and customer-service classes as well as a monthlong management and leadership course.

In the weeklong pizza classes, employees learn about “the theory of pizza and develop muscle memory on a mock oven,” which is less intimidating than the 1,000-degree ovens at Punch stores — built to produce each order in 90 seconds.

In the leadership classes, co-owners Puckett and Soranno teach employees about ideas like emotional intelligence, how to manage their finances at home to reduce stress. The classes are meant to empower managers so they create a positive attitude in the store and to make managers better, Puckett said. “Strategically, the reason we want to do this [is that] cooking this type of pizza is very difficult,” he said. “We have to have highly skilled employees that want to get better. So, it really fits our strategy of quality.”

Indeed, for all the attention on Punch’s pay, the ability to advance and build a career in the restaurant industry has been as significant in retaining employees, say those who work there. Around 70 percent of Punch managers started with the company at entry level, working as cashiers and cooks until they were promoted to become managers and general managers. “The managers act like the owners,” said Jenny Nyquist, the company’s vice president of operations. “They are on the oven, work in the operations and have a stake in the success of the business.”

Kyle Meyer, for example, left behind a slow-paced lifestyle in Duluth seven years ago in search of a busier life in the Twin Cities — without a clear career path. To pay the bills, he got a part-time cashier job at Punch Neapolitan Pizza in the University of Minnesota’s Stadium Village neighborhood.

But Meyer has stuck with the company ever since, largely because Punch has continued to offer him opportunities to advance. During Meyer’s tenure at the restaurant, for instance, he climbed the ladder from cashier to cook, to assistant manager, to manager and eventually to general manager.

Once, Meyer couldn’t imagine the job would eventually turn into a career. Now, he doesn’t picture doing anything else. “I never really thought I’d be in the food industry,” he said. “It’s kind of something I never wanted to do. But now, it’s something that I do every day — and I love it.”

What Punch Pizza learned from raising its wages