News
Good Jobs
MinnPost’s Good Jobs beat is made possible by a grant from MSPWin, a philanthropic collaborative committed to strengthening the workforce in the Twin Cities metro area. MSPWin plays no role in determining the content of the coverage.
Nov. 22, 2016

On the main floor of Minneapolis-based Atlas Manufacturing, Baxter is hard at work: She places metal pieces on a giant machine in a process that bends and punches parts before picking up the pieces and carefully arranging them on a nearby counter.

It’s a repetitive task, and at times, agonizing. But Baxter doesn’t seem to mind. In fact, she’s able to do the work around the clock throughout the year — without requiring lunch breaks. Or sick leaves. Or health insurance. Or vacation benefits.

That’s because Baxter — at 300 pounds and 6 feet tall — is a robot programmed to collaborate with human employees to improve productivity on assembly lines.

Created in 2012 by Boston-based startup Rethink Robots, Baxter has been with Atlas for a little more than a year now, performing tasks that would otherwise require two human operators.

“We were able to supplement our work with this, without having to hire additional people for a job that’s repetitive and boring,” said Zach Zurbey, an improvement leader with Atlas Manufacturing, a precision sheet metal fabrication that uses Baxter to help the company perform basic duties so that employees can focus on more complex tasks. “Also, the good thing about it is that you don’t need someone to watch it. You can just start it and let it run.”

Atlas is just one of a growing number of places — in Minnesota and across the nation — where automation is quickly and radically transforming the labor market, with robots and machinery performing a wide scope of tasks in the agriculture, manufacturing and construction industries that were once performed by humans.

The rise of automated labor

People have long debated the effect of technological change on the workforce and on humans, of course, especially unskilled or uneducated workers.

Proponents say that automation actually improved productivity in recent decades — while opponents say that it left workers without jobs. The phenomenon has accelerated dramatically in recent years: Banks have set up automated machines for people to deposit checks and withdraw cash without interacting with a teller; major retail stores have put up self-checkout kiosks for shoppers; and the parking industry has been increasingly opting for automated attendants. In agricultural production, tractors and robots have replaced manual labor, with machines that now pick fruits, vegetables and other crops, a development that has increased production but also contributed to the decline of the agricultural workforce, says Maria Gini, University of Minnesota robotics and artificial intelligence expert.

Not surprisingly, many of these industries are opting for robots for economic reasons. Robots don’t require employers to spend money on recruiting or training workers for certain jobs. At Atlas Manufacturing, for example, in addition to Baxter, a welding robot has been working for 14 years. And Zurbey noted that the two robots have played a valuable role in helping the company stay competitive. “There’s not a whole lot of profits to be made in the industry,” he said. “There’re several companies in the Twin Cities that do similar things. So, what that comes down to is to try and have the competitive edge. We have to get any leverage automation that we can or anywhere we can reduce our costs.” 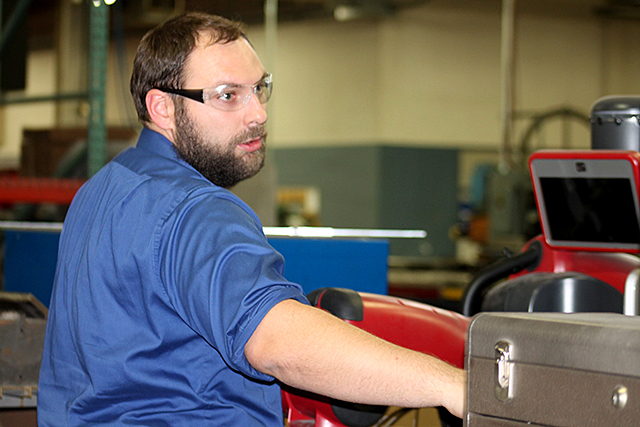 MinnPost photo by Ibrahim Hirsi
Zach Zurbey: “We were able to supplement our work with [Baxter], without having to hire additional people for a job that’s repetitive and boring.”

But robots are also being used because they’re more flexible than humans. People generally need more time and resources to learn to perform various — and sometimes difficult — tasks at fast-paced companies. In many cases, robots just need to be reprogramed. “By moving to more flexible automation, smarter automation, you can retool the equipment to do a different process,” said Todd Bauernfeind, president of Summit Machine, which engineers automation equipment for manufacturers. “So overall, it lowers your risk.”

Bauernfeind says he sees much wider acceptance of robots than he did even a few years ago. “It’s difficult today to do some engineering and build some components to do what a robot can do for the same cost,” he added. “That’s part of what is driving this robot cost to come down so much.”

And that’s why automation and robots are expected to dominate the workforce in the coming decades. According to the Boston Consulting Group, investment in robots is expected to increase by 10 percent each year in the next decade — and robots will fill more than 20 percent of the manufacturing positions.

Multiple researchers echo the same sentiment. A study from the Pew Research Center, for instance, states that 65 percent of Americans predict that robots and computers will perform most of the jobs in the next five decades. 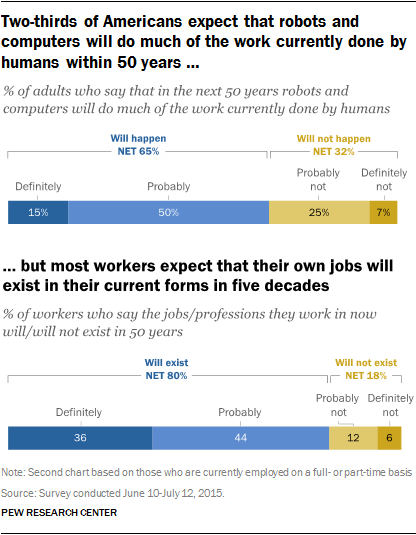 Gini says that robots are mostly filling specific occupations that don’t require skills or are too dangerous for humans — positions that employers have long struggled to fill. In the car industry, for instance, robots have taken over most of the soldering and painting jobs. “These were well-paying jobs, but not really nice jobs for people,” Gini added. “But painting cars is dangerous; you’re living on fumes. So robots are replacing those kind of jobs.”

Even so, she says, “I never heard anybody complaining: ‘Oh, I wish I could go back and paint cars,’ because most of the robots are taking away jobs that are mostly dirty and dangerous jobs.”

Bauernfeind added that companies mostly don’t bring in automation to get rid of people. Instead, they repurpose them to do other tasks. “I’m seeing it saving their jobs because the end product has become more competitive in the marketplace,” he said. “And if they didn’t do that, they risk losing the whole factory.”

Not everybody has such a rosy view of automation, of course. Matt Ehling, a Minnesota-based media producer who has written on the subject, said that many of the manufacturing jobs that have been lost in recent years have been lost to automation. “With the advent of more capable automation such as artificial intelligence software that can be trained to perform multiple, complex cognitive tasks, intellectual labor is now at risk of being automated,” Ehling said. 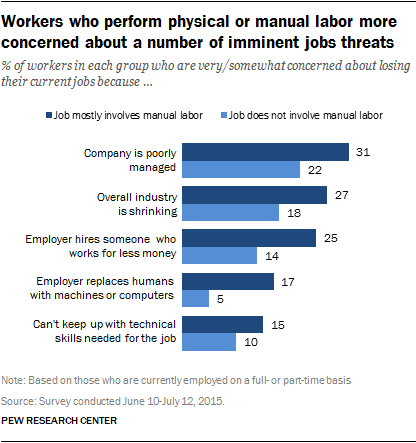 Citing Hackett Group, the business consulting firm, Ehling noted that more than 2 million service jobs were lost to automation between 2006 and 2016. And within the next two decades, he added, up to 50 percent of all jobs in the United States could be computerized.

So far, robots have filled — and are expected to continue to fill — certain kinds occupations far more than others. For instance, they’ve taken over the jobs of a number of workers with average-wages and low-skills in manufacturing and office administration. They include telephone operators, postal service workers and mail clerks — positions that are projected to decrease 18-35 percent in the coming decade.

Technology has a “good” side and a “bad” side, Gini said: While it’s helped improve the quality of life for many people, it’s left others unemployed and underemployed — and with a lot of future employment uncertainties.

One way to solve issues that technology has brought to certain populations, Gini added, is for people to seek higher education and other employment skills. “They can’t just get a job without any schooling,” she added. “They really have to learn more because jobs are going to be more advanced.”

She added: “So, it requires rethinking of the educational system. Making sure that everybody is not just learning how to read and write. Maybe they have to learn how to use computers. In a few years, no jobs will exist that don’t require the use of computers.”

Ehling said there will be a point when automation “will cut too deep” in the labor market, which might result in an economic downfall. To prevent this, he added, consumers must protest against computerization.

“Push-back against automation needs to come from consumers, who must make proactive choices not to utilize automated services, in order to blunt the growth of consumer-facing automation,” he said. “For instance, shopping at a brick-and-mortar store that employs people is a consumer choice, as is opting out of using Amazon and its highly automated warehouse operations to purchase goods.”

How robots are changing Minnesota’s workforce