On a recent Wednesday afternoon, Travis Ogilvie zigzagged a small truck through narrow north Plymouth residential streets that were dotted with garbage containers.

A few minutes into the ride, a GPS navigation app told Ogilvie to brake near a curbside on Juneau Lane, next to a green trashcan. Ogilvie stopped, grabbed a joystick by his left side and gently moved it back and forth.

That movement was controlling a giant hydraulic arm, which lifted up the bin and dumped the waste into the dustcart as Ogilvie watched what poured out of the can through a small camera mounted inside the truck.

By then, Ogilvie was halfway through his eight-hour shift, which begins at 6 a.m. each weekday and takes him to more than 2,500 houses in Plymouth, Minnetonka and Golden Valley each week.

For the past three years, Ogilvie has been driving for the Plymouth-headquartered GarbageMan, a waste-management company that began operations a decade ago in Maple Grove with one truck.

But the company didn’t always have full-time drivers like Ogilvie. In the early days of GarbageMan, its founding members did the day-to-day operations. “We delivered the cans, we picked up the trash, we dropped off the flyers,” said, Andrew Sorensen, the company’s president and CEO.

In the years that followed, however, GarbageMan has blossomed into something much bigger: The company now has 60 drivers and serves more than 50,000 customers in dozens of cities across Minnesota and South Dakota.

How did this small garbage company manage to grow so fast in the midst of a recession that eliminated millions of jobs and shut down thousands of businesses?

The start of GarbageMan

In 2008, when Sorensen founded GarbageMan with two business partners, there were two big things that attracted him to the industry. One was that it was its predictability, in that there’s generally reliable monthly income.

The other that the industry hadn’t seen improvement in decades, Sorensen believed, and he thought he could bring technology and eco-friendly approaches to deal with residential waste management. In the intervening years, GarbageMan has tried a number of approaches to address those issues.

GarbageMan has also been making use technology to make the company more efficient, from the automated arm on Ogilvie’s truck and iPods (Sorensen calls them “mobile-packs”) to the cameras mounted inside the trucks. 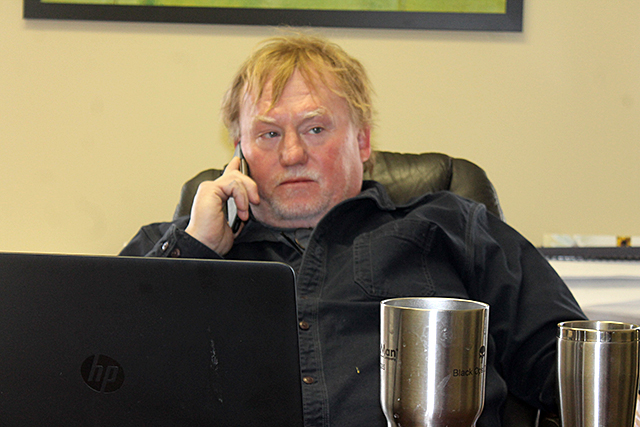 MinnPost photo by Ibrahim Hirsi
Andrew Sorensen, president and CEO of GarbageMan, started the company in 2008 with one truck. Today, it serves more than 50,000 customers in Minnesota and South Dakota.

The mobile-packs keep track of the truck operators as well as when and where each driver picks up trash on a given day — which Sorensen says makes it easier for the company to effectively serve its customers. “Let’s say a customer calls and says, ‘I forgot; I didn’t put my trash out,’” he said. “Our customer service representatives look on the map and say, ‘You know what, John is just two blocks away. I’m going to send him right back.’”

GarbageMan’s approach to waste management, Sorensen said, has given the company a competitive edge over other haulers in the Twin Cities metro-area, a claim that he says is demonstrated in its growth. During its initial stage, it took GarbageMan six months to recruit 1,000 customers. Just a few years later, the company was able to gain 30,000 customers in just three months.

GarbageMan’s rapid rise might not come as a surprise to those who study the industry. According to a report from the IBISWorld, an Los Angeles-based market research company, waste disposal companies are increasingly in demand, a need being driven by increased consumer spending, which generates more products and packaging in household waste. “In the coming years, an acceleration in consumer spending is anticipated to continue raising demand for industry services, despite sustained gains expected in recycling,” the report notes.

In the Twin Cities metro-area, competition has become intense among garbage companies. In Plymouth, there are now 17 licensed haulers for a population of 74,000; in Fridley, there are 21 haulers for 27,000 residents; and in Bloomington, 13 companies service 40,000 people.

GarbageMan currently has 60 drivers and 50,000 customers in Minnesota and South Dakota. Garbage driver jobs generally require a clean driving record and a class B commercial driving license. Industry-wide, the average annual salary for a driver is around $40,000, and tends to provide a steady 40 hours per week of work.

“It’s a good job,” Sorensen said. “They can make a decent living — and they don’t have to work every weekend.”

Ogilvie joined GarbageMan three years ago, after leaving an office job with the company. “I wanted to make more money,” he said. “So I talked to the boss, and I got me a license.”

Aside from the pay and work hours, there’s another reason Ogilvie chose the job: “I got to be by myself,” he said. “I don’t deal with people.”