News
Good Jobs
MinnPost’s Good Jobs beat is made possible by a grant from MSPWin, a philanthropic collaborative committed to strengthening the workforce in the Twin Cities metro area. MSPWin plays no role in determining the content of the coverage.
March 13, 2017

The Cedar-Riverside neighborhood on Sunday celebrated the grand opening of a long-heralded career center aimed at connecting area residents to employment opportunities and educational resources.

The ribbon-cutting ceremony for the Cedar Riverside Opportunity Center, which has been in the making for over two years, drew nearly 100 neighborhood residents and government officials from the city of Minneapolis and Hennepin County.

The center — which is housed in the Five15 on the Park high-rise building — begins its operations on Monday, providing residents everything from on-site employment recruiters to counseling services for assisting people in earning career credentials. The 5,000-square-foot facility features four interview rooms and a training room.

The center was founded to combat unemployment challenges among East African residents in the neighborhood, which has long seen some of the highest joblessness rates in the city.

“This is a community space,” said Council Member Abdi Warsame, who led the effort to establish the center in partnership with Hennepin County commissioner Peter McLaughlin. “It’s also a space that signifies the East African community’s growth in this part of the city of Minneapolis.”

The project is the result of partnerships between city and county governments as well as local employers and educational institutions. EMERGE Community Development, for instance, leads the center’s day-to-day operations, such as workforce development services and youth employment and education programs. 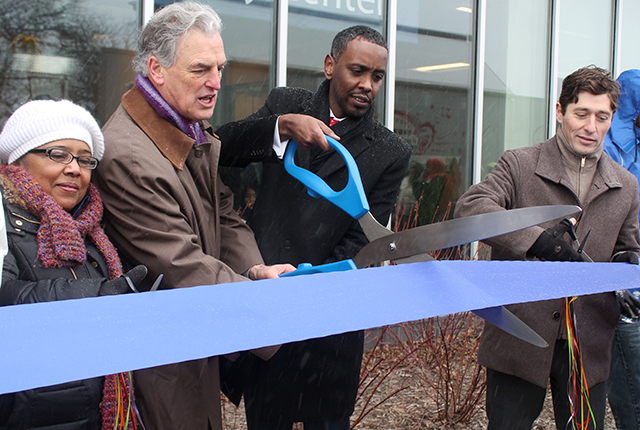 Representatives from Minneapolis Technical and Community College share a space at the center to provide visitors the information and counseling services they need to obtain education and career training skills. And the center’s employer partners — including Hennepin County, the University of Minnesota, the city of Minneapolis and Augsburg College — will also have a regular presence at the center to hold on-site interviews and recruit workers.

“I’m proud that Hennepin County can be a partner in this,” said Hennepin County Commissioner Peter McLaughlin. “This is going to be a pathway to opportunity for residents of this neighborhood and the entire East African community.”

McLaughlin told the crowd at the Sunday event about a meeting he had with elders of the Cedar-Riverside community eight or nine years ago. One of their requests, he said, was access to job opportunities for people in the neighborhood.  “There’s a great tradition in America,” he said, “a great tradition of providing opportunity — and to me, this building represents America’s better angel … to open the door of opportunity, to provide hope and to provide a new pathway.”