Emily Baxter has spent years challenging the “once a criminal, always a criminal” perception that many people in positions of authority have of people with criminal records.

Now, she has a new book, “We Are All Criminals,” that examines mass incarceration in the U.S., what it means to have a criminal record and how race plays a role in the system.

The book also tells the stories of hundreds of Americans, including doctors, lawyers, cops and legislators, who relate their stories of crime and how some of them got away with it — while others have paid the price.

Through those stories, written in first-person narratives, Baxter is trying to demonstrate that nearly every American has a criminal history, but only those with criminal records carry the burden.

The author especially wants policymakers, employers, landlords and school administrators to pay attention to one important aspect in the book: that people who are in positions of authority should consider re-examining policies that have long excluded individuals with criminal records.

“What this project does is ask [people] to consider their own criminality and the second chances that they’ve received in life,” Baxter said in an interview. “Basically, to recognize the humanity behind the person with the record.”

The number of individuals with criminal records in the U.S. is strikingly high, especially among communities of color. Baxter states in the book that 1 in 3 black men will go to jail in their lifetime, compared to 1 in 17 white men.

In many cases, people are imprisoned for crimes committed before their brains were fully developed. But the consequences of those convictions are almost always permanent.

That’s why many people who served time aren’t able to secure jobs or rent apartments in Minnesota and across the nation. “Their criminal histories tether them for their past,” Baxter, who now lives in North Carolina, writes in the book. 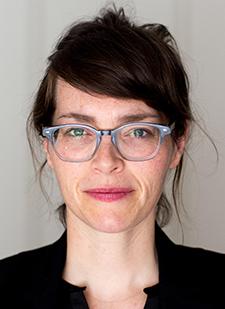 In a phone interview last week, Baxter spoke of her experiences with ex-offenders she served as a lawyer some years back. She said most of her former clients were people of color and indigenous people, who were never given “the opportunity to come up for air” after release.

“That’s not who I am,” she added. “I’m white; I’m middle class; and I think that has a lot to do with my ability to have left my teens and 20s without carrying a felony record.”

For a decade now, Baxter has been working with employers and policymakers to help create opportunities that would provide people with criminals record a chance to rebuild their lives.

One of the successful efforts that Baxter was involved is the Ban the Box legislation, which passed in 2013, barring employers from asking ex-offenders about their criminal record during job interviews.

Starting ‘We Are All Criminals’

But several years ago, Baxter was doing something different. One day, as she sat in a windowless room inside an expungement clinic in downtown Minneapolis, a man walked in and handed her a copy of his criminal record.

At the time she was a lawyer for the Council on Crime and Justice, and her job included finding options for ex-offenders to seal old criminal records — to help remove barriers that would prevent them from getting hired.

So she opened the copy and found out that her client, who was seeking an expungement, had theft on his record. “I thought it shouldn’t be something that would disrupt his life,” Baxter said. “But he quickly set me straight. I was right, it shouldn’t disrupt his life, but it had affected him in a deeply professional and personal way.”

It was then that Baxter started to reflect upon her own criminal history and the many occasions she’d “broken laws similar” to the clients she had served. The only difference was that her clients were caught in the act. She wasn’t. 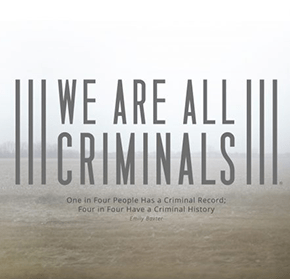 This inspired her to create the Twin Cities-based We Are All Criminals (WAAC), a project Baxter founded during her 2011 Bush Foundation Fellowship to foster opportunities for people with criminal records.

Through WAAC, Baxter has interviewed hundreds of people about their criminal histories. They included doctors, lawyers, policymakers, law enforcement officials, professors and pastors, who talked about drugs they’ve sold or consumed; homes they’ve broken into; and cars they’ve driven drunk.

“What has been so encouraging to me is that people are willing to come forward and share these stories because they want to contribute to change,” Baxter said. “They want an opportunity to talk about their privilege.”

In 2013, WAAC became a nonprofit organization, through which Baxter shared the stories of the people she interviewed by posting them on the internet and creating traveling exhibit. The exhibit has visited universities, law firms and cafes throughout the state.

The message is mostly for employers, landlords, school administrators, prosecutors, law enforcement agencies and “anybody that needs to hear” about the organization, Baxter said. “So presentations are one vehicle for this conversation,” she added.

Another platform WAAC uses is its website, which houses stories of people Baxter interviewed about their criminal histories.

In October, Baxter released the 279-page “We Are All Criminals” book, which is meant to complement the WAAC project’s online presence, traveling exhibits and presentations.

Meanwhile, WAAC has expanded its reach beyond Minnesota. Baxter has so far presented about the American criminal justice system and second chances in North Carolina, New Mexico, California and Connecticut.

In the spring, she’s scheduled to travel to Canada and Scotland to talk about WAAC.

Many countries, she said, that have adopted the U.S. criminal justice system are now realizing the need to change policies that prevent employers from hiring individuals with criminal records.

That has also been the case for some employers in Minnesota. Baxter noted that when she first started reaching out to employers about considering people with criminal records for openings, they used to quickly dismiss the idea.

These days, however, such attitudes are starting to slowly change. “Now in 2018, I have chambers of commerce reaching out to me to provide training to employers,” Baxter said. “That’s such a mass change.”