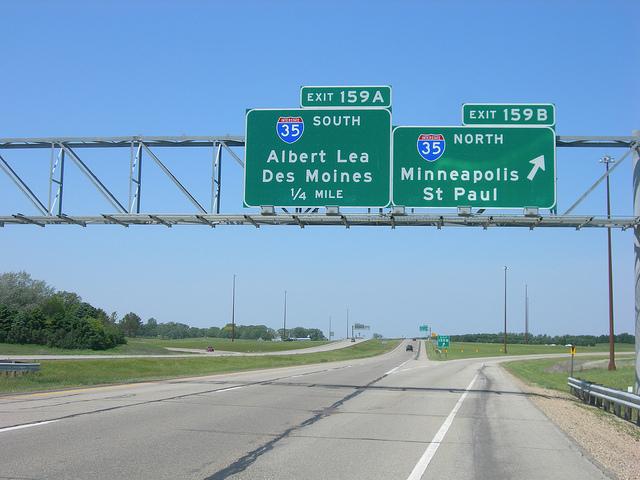 CC/Flickr/Jimmy Emerson, DVM
Albert Lea’s location at the junction of I-35 and I-90 make it a prime spot for sex trafficking.

Albert Lea, which sits at the junction of Interstates 35 and 90, is a prime spot for sex trafficking, reports Sarah Stultz of the Albert Lea Tribune. A new report by the U.S. Department of Justice’s Office of Justice Programs Diagnostic Center looks at the issue so Albert Lea police can be more effective fighting the crime and educating the community. To thrive, sex trafficking needs to be near metro areas where services are desired, have easy transportation, and have places to traffick. The report said Minneapolis-St. Paul, Mankato and Rochester are known human trafficking hubs. Between the two interstates, about 19 million vehicles move through Albert Lea each year. The city has almost 170,000 hotel rooms available and an annual occupancy rate of 50 percent. Looking forward, the authors said that while there is not a huge volume of sex trafficking in Albert Lea, the community needs to be prepared to react if the problem grows, including having resources to help human trafficking victims. The study was free to the Albert Lea Police Department.

A drop in water pressure last week meant mandatory testing of Brainerd’s water supply, and one of the tests came back positive with coliform bacteria. That means Brainerd residents are under a water-boil order for all drinking and cooking water, reports Jessie Perrine of the Brainerd Dispatch. The city will test the water again this week and if it comes back clean, the water-boil order will be lifted but the state requires the city to add chlorine to the water for 30 days to make sure no one gets sick. That’s a bit of a problem because Brainerd has been fighting water chlorination for many years and residents are none too happy about having the chemical in their water, even for a short time. Perrine writes: “Brainerd has the largest unchlorinated drinking water system in the state. For more than three decades, the state has been trying to get city officials to change that. The state can’t force Brainerd to permanently chlorinate its water, but (the Minnesota Department of Health) strongly recommends it. … (Brainerd) has chlorinated the water system at least twice in the past, once in 2009 following a positive test.”

Winona-area barge traffic last month reached the highest amount for August in 13 years, writes Tesla Mitchell of the Winona Daily News. “Total barges stopping through Winona on the Mississippi River — whether to park, load, or unload — reached 176 in August, according to city of Winona statistics released Monday. The last time traffic reached that level was in August 2002, when it reached 170.” Mitchell writes that the total was helped by the closure of the commercial canal for a week in July while the U.S. Army Corps of Engineers dredged the river. Also, lower crop prices means lower demand for barges to haul grain, so the number of barges coming through Winona most likely will see a sharp decline in September.

The Bemidji City Council has decided to quash all requests to dress up the Paul Bunyan and Babe the Blue Ox statues on the shore of Lake Bemidji. In the past, community groups would petition the city to dress the icons to promote an upcoming event, such as putting a fez on Paul to promote the upcoming Shrine Bowl football game and parade, writes Zach Kayser of the Bemidji Pioneer. But on a 6-1 vote, the council decided to end the practice. “How are you going to say ‘no?’ ” asked Councilor Roger Hellquist. Allowing non-controversial costumes may make it difficult to deny more risqué ideas in the future, the council argued.

The state Department of Natural Resources says the pheasant population is up over last year, writes John Myers of the Duluth News Tribune, despite a long winter and a rainy June. Myers also notes that the pheasant count is still “58 percent below the 10-year average, and a whopping 71 percent below the long-term average. The state has been conducting the survey since 1955.” While weather has been a factor, the loss of hundreds of thousands of acres of grassland under the federal Conservation Reserve Program has had the biggest effect. High crop prices have encouraged farmers to take their land out of the CRP and plant crops. Myers writes that Minnesota has lost nearly a quarter-million acres of grassland since the Conservation Reserve Program peaked in 2007, and stands to lose another 290,000 acres in the next three years, the DNR predicts.

PrideFest in Mankato has always had an “us against them” quality as the LBGT community used the event in years past to pursue their rights, writes Josh Moniz of the Mankato Free Press. But now that same-sex marriage has been legal in Minnesota for more than a year, this year’s event was different. “Other years, there has been these clouds looming over the event, like the marriage amendment or (opposition) to the Safe School bill,” said Jessica Flatequal, director of the LGBT Center at MSU. “But this year, it feels like we can just be out there and have a good time.” The event drew some protesters: Jesse Morrell, a missionary with the national organization Open Air Outreach joined three activists from outside of Mankato with signs that read “Repent or perish” and “You have sinned against God.” PrideFest drew about 500 people for the parade down Riverfront Drive while the event at Riverfront Park drew several thousand, Moniz reports.

The always-helpful DNR has produced its annual map of where and when to find the best fall colors. The Fargo Forum writes that the wet, early summer means the display will be beautiful but quick. The site updates each Thursday. Colors typically peak from mid-September to early October in the northern third of Minnesota, from late September to early October in the central third and from late September to mid-October in the southern third. Peak fall color typically lasts about two weeks, but that can vary widely, depending on location, elevation and weather. Go here for more information or call 888-646-6367 between 8 a.m. and 4:30 p.m. Monday through Friday.

While hundreds of people enjoyed the Dragon Boat Festival races on Lake Bemidji several weeks ago, City Council member Ron Johnson was having the time of his life – literally. Johnson suffered a heart attack while rowing one of the dragon boats, writes Zach Kayser. Johnson was a late fill-in on the Lakeland Public Television boat. He had biked to the races and planned to only spend a minute there but chose to row instead. Now he says it was a blessing because he had no indication of arterial blockage before, and if he had had a heart attack when he was biking alone or somewhere far from medical help, he could have died. Instead, he was surrounded by emergency responders who worked hard to get his heart started again and was close to a hospital that could repair his heart.  “In a way, it was a blessing,” he said.