Rarely do you see numbers butchered as badly as in the Minnesota Department of Public Safety’s announcement Wednesday that Hennepin County was the deadliest county in the state for alcohol-related deaths and injuries from 2004 to 2006. Ramsey County placed second, Anoka third, and Dakota fourth.

The Star Tribune and Pioneer Press reported the story on their websites Wednesday without even noting that the report did not adjust for each county’s population. This renders the rankings meaningless.

Late Wednesday night, and for the printed paper, the Star Tribune did at least note that the populous counties ranked higher, and it played down the rankings in the story, but the headline continued to say, “Hennepin tops list of worst counties for drunken driving.” The Pioneer Press story totally ignored the link to population.

It’s a good bet that Hennepin County also leads the state in cancer deaths, property taxes collected, number of obese residents and even fishing licenses. But Hennepin County also has about twice the population of the next-biggest county, Ramsey — which, lo and behold, finished as the second-most deadly county in the Public Safety Department report.

With my pocket calculator, I recalculated the safety department’s data to account for population — in other words, on a per-capita basis. I just divided the number of alcohol-related deaths and serious injuries over the three-year period by the population of the county, based on the 2000 Census. 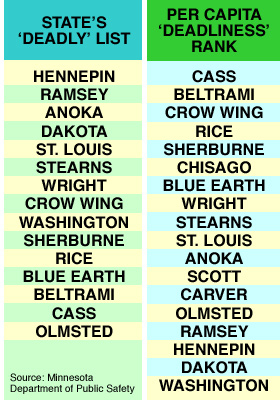 Look at these two lists. On the left is the state’s ranking of the most deadly counties. On the right, is the deadliness rank of those same 15 counties on a per capita basis, plus — in case you’re curious — the three metro-area counties that didn’t make the state’s top 15.

Nuances in the numbers
That comes close to turning the ranking on its head. Cass County is five times as deadly as Hennepin, once you adjust for population. That’s not strictly the same as saying a Hennepin resident has one-fifth the chance of dying or being seriously injured by a drunk driver, because the fatality and injury victims may not be residents of the county where the accident occurred. But it’s almost certainly true that the risk to a typical Hennepin resident is far lower than to a typical Cass County resident.

Often, an argument can be made that there’s a better factor to adjust for than population. For example, these deaths and serious injuries could be expressed as a percentage of miles driven in each county. This won’t align exactly with population, because in metro areas, people drive fewer miles per capita. But this is a nuance, and the choice can create a lively debate.

Still, comparing numbers of anything in Hennepin County with the numbers in counties that are 20 times smaller, and not adjusting for population or something similar, makes no sense.

With analysis like that, you could conclude that Russians are wealthier than Swedes, or that New Jersey is a more agricultural state than Iowa.