Some of the tragicomedy on television is unscripted, as when a news report showing Hurricane Gustav filing its fangs on the Louisiana coast segued to an advertisement for the erectile-dysfunction drug Cialis.

Forget about storm surges and death by drowning, there’s a new dosing regimen for Cialis, and you’re gonna love it! Cialis for daily use: “A very effective option for men who want to be ready any time the moment is right.”

Though Gustav has long since blown itself out, the Cialis-for-daily-use campaign continues to churn. You might not remember the name Cialis, but you’ll probably recall graying couples addressing each other with coquettish body language, who then somehow end up perched in a set of his-and-her clawfoot bathtubs on a cliff overlooking the ocean. Or as depicted on a Cialis website, directly on the beach with the surf swirling beneath the porcelain. I don’t know what one of those bathtubs weighs, but I imagine a man must have to be very motivated to lug a couple of those into position. Wine and flowers seems like a much more back-friendly option. 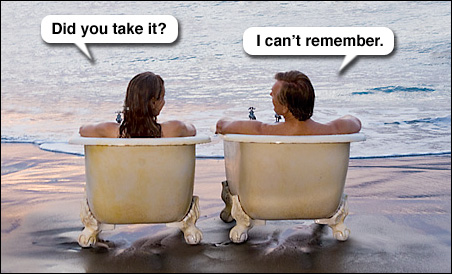 To review, there are three major ED drugs on the market: Viagra, Levitra, and Cialis. They work through the same mechanism, but Cialis lasts longer — about thirty-six hours. Hence the nickname “The Weekender,” because taking it on Friday evening means one can be “ready” through Saturday evening without having to redose. That leaves plenty of time on Sunday to drag the damn bathtubs back to the house.

But what does “any time the moment is right” really mean, and does that claim hold up? All three ED drugs are absorbed rapidly, but they still must be taken 30 to 60 minutes prior to the event in order for them to work. This requires adding some forethought to foreplay, which in some circumstances could get a little clumsy or awkward.

According to data from the Cialis package insert, two hours after taking a 20 milligram (mg) tablet of Cialis, drug levels peak at over 300 micrograms per liter (ug/L). At 36 hours, the advertised outside window of effectiveness for Cialis, blood levels fall to around 100 ug/L, then taper off to almost zero four days later. By comparison, a single 5 mg tablet produces a much smaller peak, less than 100 ug/L; a 5 mg taken daily establishes a baseline blood level of around 70-80 ug/L, with a peak of about 130ug/L after each dose.

Low level maintained
Using this data, what “any time the moment is right” really means that if a man is taking a 5 mg tablet every day and suddenly his partner wants to trip the light fantastic, he wouldn’t have to slow things down, take a pill, and wait 30 to 60 minutes. He has a low level of Cialis in his blood that might be effective. Might. If he doesn’t want take any chances, he’d still be better off taking his daily 5 mg right before the event, so as to take advantage of the peak effect (though Lilly recommends dosing the same time every day). But that approach eliminates the “any time,” no-waiting convenience of the daily-use dose, which is why one was taking it in the first place.

One possible advantage is that taking a smaller amount of the drug on a daily basis might alleviate some of the dose-dependent side effects that come with the 10-20 mg spur-of-the-romantic-moment dose. Bigger doses lead to bigger drug level peaks and higher chances of side effects.

Dr. Utz agreed, but noted, “There are two sides to that equation [lower dosing can lower the side effects]. There are clearly some people who have fairly brittle ED where the 5mg tablet isn’t enough. They need higher doses, the higher blood levels, to have the drug be effective.”

Lilly’s website doesn’t comment on any potential advantages of the daily regimen except to say, “This may be a good low-dose option for men who anticipate frequent sexual activity (twice a week or more).”

Insurance limits
Men who are sexually active at that clip — twice a week or more — may also find themselves running out of pills, since most insurance plans that cover these erectile-dysfunction medications (and not all do) limit prescriptions to six or eight pills per month.

How have insurers responded to the idea of paying for a daily pill prescribed for a non-life-threatening condition, just so that its plan members can be “at the ready”?

Since Utz hasn’t prescribed Cialis for daily use, he couldn’t say for sure, but he had a pretty good guess. “What do you think they’re going to say?” Utz asked rhetorically. “I’ve got news for you: They’re going to look into it and say, ‘No way are we doing that. 5 mg or 20 mg, you take your pick.’ “

Utz is correct. Representatives from Medica, Health Partners and Blue Cross and Blue Shield of Minnesota told me that while coverage of ED drugs varies by individual plan, none offers a plan covering Cialis for daily use.

Regardless of who is picking up the tab, an additional problem with Cialis for daily use is compliance. Yes, sex and sexual health can be powerful motivators, but so should the risk of a heart attack, or a stroke, or the malaise that comes with poorly controlled diabetes. And yet study after study shows that people have a hard time (logistically or financially) consistently taking drugs that are essential to their health. So why should this be any different?  In this case, miss a few pills and your Cialis blood levels fall below the therapeutic range: You may not be ready, and as a physician friend of mine quipped, it could be several months before the stars realign and the opportunity presents itself again.

But guilt can also be a powerful motivator, which is an obvious benefit to daily-dosed Cialis: using guilt to put one’s partner in the mood. “You mean I’m swallowing this pill every day of the week and you’re not interested?”

Or just stick with the clawfoot bathtubs, and remember to lift from the knees.