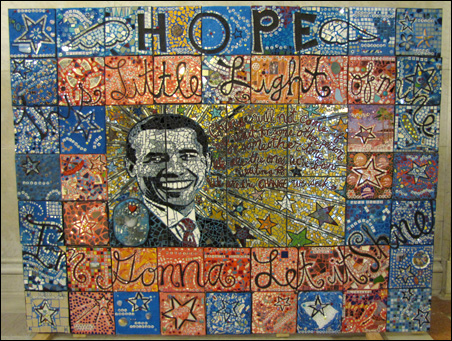 Tracey Snead, Municipal Building Commission
The Obama mosaic will be on display in the Minneapolis City Hall and Hennepin County Courthouse Rotunda Gallery through Feb. 27.

Minneapolis mosaic artist Angela Carlson Talle had hoped a 9-foot by 7-foot mosaic of President-elect Barack Obama would make its way to Washington, D.C., for the inauguration. After all, the project she helped design and coordinate was displayed during the Democratic National Convention at a gallery in Denver before returning to Obama headquarters in Minneapolis.

That didn’t work out. Instead, we get another chance to ooh and ah at the mosaic — this time in the Minneapolis City Hall and Hennepin County Courthouse Rotunda Gallery.

If Talle ever needs a career change, she might consider community organizing — remember the field that came under attack during the presidential campaign? Last year, she found volunteers in 50 states to create one square each from tile kits she had assembled from her design. She tried networking at first. Not much success there. Eventually, she went to the Obama campaign’s website and figured out how to send emails to supporters in each state. “I heard from 600 people in three days, saying, ‘I’ll do it, I’ll do it.’ ”

Not all of the 50 volunteers were artists, but most managed to find elements that represented their states, Talle said. “A girl from Nebraska did a piece of corn,” she said. “Some people found whatever they could and put it on there, and somehow it all fits together.”

The 50 squares surround an image of a smiling Obama. Talle worked on the 2-foot by 3-foot section of Obama on her own. (For photos of the mosaic project in progress, go here.)

She figures she and her husband spent $2,000 on the project. So, why would an artist go to such lengths?

“I was very inspired after hearing Barack a couple of times in town, and I wanted to do something collaborative that spoke of something I saw happening all over the country,” she said.

The mosaic, which is on display through Feb. 27, is being presented through the City Hall and Courthouse rotating exhibit program, which “seeks to educate, inform and promote city and county programs, history and art to city and county staff and the general public,” according to a press release. The government building is open to the public from 6 a.m. to 6 p.m. Monday through Friday. The exhibit is free. More information is available from the Municipal Building Commission.

Where will the mosaic go next? It might end up in storage for a while.

“I hope it goes somewhere for a final resting spot,” Talle said, adding she’d be pleased to give it to Obama even though she doesn’t think he’s seen it. “I don’t want to wait eight years for the presidential library or some other place.”