This article was produced by Kaiser Health News.

Many Medicare beneficiaries treated at primarily rural “critical access” hospitals end up paying between two and six times more for outpatient services than do patients at other hospitals, according to a report released Wednesday by the inspector general at the Department of Health and Human Services.

Many supplemental insurance policies for the elderly pick up the tab, but one in seven Medicare recipients lacks such a policy. In addition, these higher medical costs are ultimately factored into the premiums insurers set.

The inspector general’s office recommended Congress change the law so that a Medicare beneficiary’s financial responsibility better reflects the cost of the service.

Brock Slabach, a senior vice president at the National Rural Health Association, said this issue has been raised before by the Medicare Payment Advisory Commission, or MedPAC, which counsels Congress. He said that because the law requires that critical access hospitals be paid their “reasonable” costs plus 1 percent, Congress would either have to change the law or Medicare would need to pay more to make up for the lower patient portions. 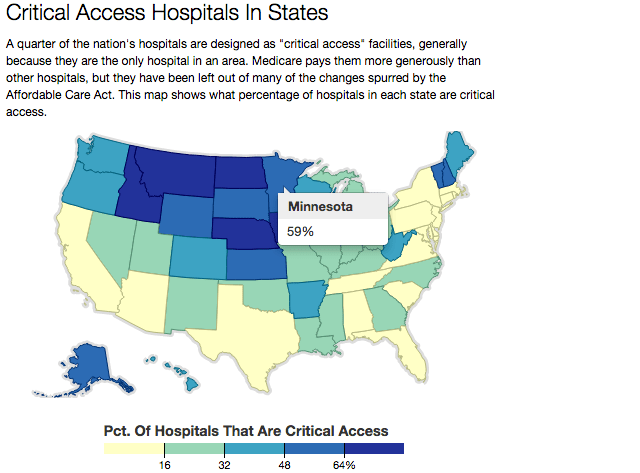 “The reason this hasn’t been solved is it would require the Medicare program to subsidize more,” Slabach said.

Since the MedPAC report in 2011, which offered a number of ways to fix the system, the share of medical costs picked up by patients has risen further, the inspector general found.  The patients’ portions of critical access hospital bills in 2012 were 47 percent of Medicare’s estimate of the cost of the treatment, with Medicare paying the remainder, the report said. Medicare beneficiaries paid about $1.5 billion of the $3.2 billion in outpatient services at critical access hospitals.

Medicare offered a short response to a draft version of the report in August, saying it “thanks the OIG [inspector general’s office] for its efforts and looks forward to working with OIG on this and other issues in the future.”

This chart shows how many critical access hospitals are in each state and what percentage of the state’s hospitals they comprise.