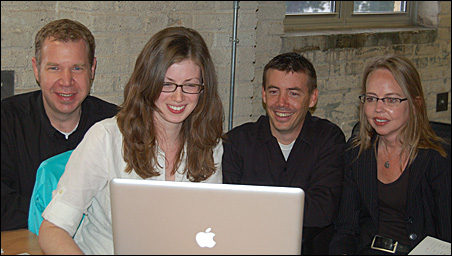 The payments kept pouring in all day yesterday, the 10th and final day of MinnPost’s first sustaining member campaign.

There were well known community leaders, and there were people we never heard of. One supporter committed to $2,500 a year, renewable each June. Others signed up for $5 or $10 a month.

Together, they made sure we didn’t just beat our campaign goal of having 250 sustainers, we annihilated it — we finished the campaign at midnight last night with 435 donors, or 74% above goal.

As the proverb says, it takes a village to pull off a sustaining membership drive. Our deepest appreciation to our new membership director, Stephanie Johnson, for overseeing and driving the project; to web editor Corey Anderson for designing and editing the testimonials and pumping out messages on social media; to advertising operations director Brian Perry for the supportive advertising and emails; and news technology director Kaeti Hinck for overseeing the videos and also promoting the campaign on social media — and to all of them together for their outstanding teamwork.

The most important thank you, of course, is to all of you who made the commitment to be a sustaining member of MinnPost. You have made a statement that you’re in for the long haul, as are we.

Next week, we’ll post a draft list of everyone who became a sustainer during this drive, and ask you to check that we haven’t omitted or misspelled any names. This list of Founding Sustainers will remain on our Members page, right next to the Founding Members list from 2007.

The campaign may officially be over, but you won’t be surprised to hear us say that you can still sign up as a sustaining member, any day, any time, here.

Thank you, sustaining members: We beat our goal by 74 percent

By Joel and Laurie Kramer