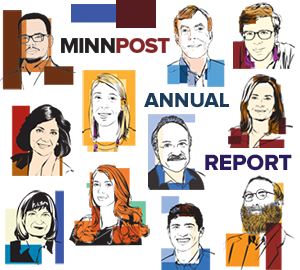 MinnPost is bigger and better than ever. In our eighth year, we set new highs for readership and membership, and for the second year in a row we were named by the Online News Association as one of the nation’s top sites of our size.

Our 2015 year-end report, published Friday, includes a review of our journalistic accomplishments and financial health, as well as thank yous to those whose contributions helped us have such a successful year.

Our page views, visits and users were all up, as was the amount of time people spent on the site. All in a year in which there were no major federal, state or local elections — coverage which is MinnPost’s bread and butter.

This year, many of our most-read stories were also our most ambitious: exhaustively reported pieces on issues critical to Minnesota. An in-depth look at the hiring practices at the University of Minnesota. An investigation into misconduct by a Minneapolis police unit. Several deep-dives on the political maneuvering behind a new professional soccer stadium. These stories often take weeks, and sometimes months, to produce, and their popularity is testament to both the community’s need — and readers’ hunger — for journalism that goes beyond the factoid of the moment or the meme of the week.

Membership donations and event revenue were up 14% from 2014, with the strongest growth coming from member-donors who give less than $1,000. We finished 2015 with 2,616 member households, up 16% from last year.

Advertising and sponsorship revenue were up 3% in what continues to be a challenging and competitive market.

A year ago, we reported that we had begun positioning ourselves for a successful future, hiring two new leaders for the editorial and business sides of MinnPost.

Publisher Andrew Wallmeyer and executive editor Andrew Putz have now been on the job for more than 18 months, and they are having a great impact, as you can see in their accompanying reports. In addition, MinnPost just promoted office manager Bethany Hollenkamp to the new position of director of finance and operations, and recently welcomed our first development director, Claire Radomski, to fill out the executive team.

With these leaders in place, we as co-founders will continue to transition our staff roles to our new leadership during the course of the year. We are working on a detailed transition plan with our Board, which anticipates our continued commitment to serve as active members of the MinnPost board of directors and a few board committees.

We are profoundly grateful for the opportunity to work with so many fantastic people: our staff, our Board, other volunteers, partners, and MinnPost’s many financial supporters and loyal readers. Our goal continues to be to provide high-quality journalism for people who care about Minnesota, and to create a sustainable business model for that journalism in a challenging time for media.

We are proud of what MinnPost has accomplished, and what it has come to mean to Minnesotans. And we are optimistic that its future is bright, and that our leadership succession will be managed to leave MinnPost in good hands.

MinnPost sets new highs for readership and membership in 2015