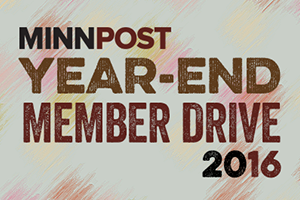 MinnPost is nearing the halfway point of our year-end membership campaign. So far, we have received over 100 gifts of support from readers, including gifts from 33 new sustaining members.

A majority of comments from our readers echo those of Robert Bowman, who said he gave to MinnPost because he wants to “support local, independent, and responsible journalism.”

Our goal for this year-end campaign is $75,000, which will directly support our critical state and local reporting in 2017.

New this drive, readers who become Platinum members by giving at least $20 per month (or $240 at one time) will be eligible for new one-year digital subscriptions to The New York Times.

And when you do, take a moment to tell us why. Below are testimonials we’ve received in the first days of the campaign, reprinted with permission. We will continue to reprint them as the member drive continues.

We give because it is important to support principled independent journalism. – Thomas & Sheila Rockne, Maple Grove

The depth of coverage pertaining to the city of Minneapolis and out-state issues. – Verne Greenlee, Minneapolis

The combination of daily state and national news, combined with events that make them live cannot be beat. Thanks for all you do. – Howard Miller & Kate Hunt, St. Paul

MinnPost has a pulse on what’s relevant that other news outlets seem to miss. – Jonathan Waldo, St. Paul

I enjoy the vast spectrum of well-written articles available. I especially love the articles written about both conservation and architecture; however, all the articles I’ve read on MinnPost are great! – Jill Dvergsten, Thief River Falls

We like to follow Minnesota news now that we live in Oregon. MinnPost offers the very best with a dash of Brian Lambert and Eric Black! – Mary & Stephan Flister, Springfield, OR

MinnPost readers give to support ‘local, independent, and responsible journalism’