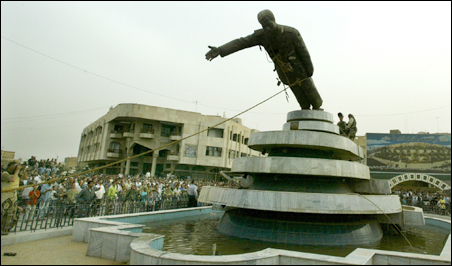 Note: It was eight years ago this month that Baghdad fell to invading American forces. I knew Baghdad well and offer these anniversary reflections. I’d like to hear your stories from Iraq. Interested? Respond in the comments or send your story to jsguntzel@minnpost.com.

I was 23 years old and laid out asleep on the rear bench seat of a rented GMC Suburban the first time I crossed into Baghdad. I had fallen into a fitful slumber somewhere around Fallujah. It was October 1998 — George W. Bush was governor of Texas and Saddam Hussein was the president of Iraq. It was nighttime when I woke up. Strings of colored lights crisscrossed the street.

“Welcome to Baghdad!” The Iraqi driver of our rented GMC smiled at me in his rear view mirror. He had picked us up in Amman, Jordan 12 hours earlier for the overland journey. Baghdad’s airport had been shuttered for nearly a decade. Iraqi Airlines’ 17 jetliners were grounded in 1990 — a condition of the United Nations economic sanctions that preceded Operation Desert Shield in 1991. Until the war in 2003, those sanctions seemed to be about the worst thing that could happen to Iraq. It was collective punishment and forced deprivation masquerading as a policy of containment.

Stuck between a dictator and his adversaries
Iraq’s decade-plus under sanctions isn’t part of the narrative anymore, but it was the sanctions that drew me to Iraq that first time — and many more times between 1998 and 2001. I saw a story there. The sanctions were sustained by a fickle coalition of U.N. Security Council members forever feeling pressure from the policy’s chief architects and boosters: The United States and its faithful partner the United Kingdom.

When the murderous dictator Saddam Hussein tussled with his international adversaries, neither suffered in any significant sense. It was the 25 million people who were not Saddam Hussein who suffered, and badly. That was the story. I had come to Iraq to see that suffering — not as a reporter (journalism hadn’t yet occurred to me) but as a humanitarian. I traveled as a volunteer for an organization that delivered symbolic shipments of aid and returned to the United States with the stories collected there — of people struggling, a country crumbling, and a dictator persevering.

The country’s critical infrastructure was in shambles by 1998. Its hospitals lacked essential equipment and medicines, which had been banned under sanctions along with anything else deemed “dual-use” by a special U.N. committee, meaning it could have civilian or military applications. People were dying in terrible numbers of illnesses that could have been treated elsewhere — or in Iraq before the sanctions. Career U.N. staffers stationed in Baghdad were resigning in protest of the policy.

I came back to Iraq every few months and brought with me groups of American religious leaders, journalists, even Congressional staffers. I gave talks, appeared on radio and television news programs, and penned newspaper op-eds.

In August 2001 I visited a Baghdad high school and asked a group of students what message they would have me bring back home with me. A 16-year-old girl stood up and spoke in near-perfect English (this was not uncommon in Baghdad): “I just have a question for Americans: Why do they hate us?”

Then in September the unthinkable happened — not those terrible attacks on American soil (though horrifying, this was not unthinkable to me), but the first mutterings about a full-scale American invasion of Iraq.

In the desperate discourse those first weeks after the Sept. 11, 2001 attacks, Americans all but patented the question that young Iraqi girl had asked me weeks earlier. “Why do they hate us?” had become sort of a national mantra— even if “they” were an abstraction.

I wonder about that girl from the high school in Baghdad. She would be 23 now, the same age I was on my first visit. Where is she? How is she? Does she even bother to ask questions of the Americans anymore? 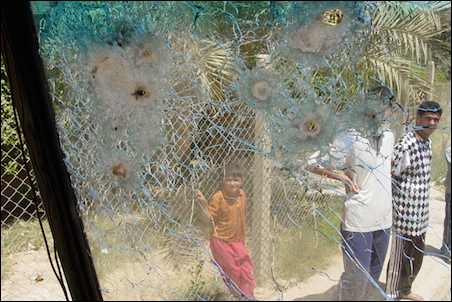 MinnPost photo by Jeff Severns Guntzel
The view from the driver’s seat of a vehicle attacked by U.S. soldiers when the driver failed to properly heed hand signals to stop.

A new Iraq: returning after the fall
I made my last overland journey from Amman to Iraq two weeks after the fall of Baghdad. A generous newspaper editor I had shown around Iraq in 1999 took me up on an offer to write whatever I found in this new Iraq. I still wasn’t a reporter, but this would be the beginning of that.

Daylight was the safest time to travel the long desert road. There were daily reports of roadside bandits stripping cash, equipment, and supplies from carloads of journalists and aid workers. Night driving was out of the question. In order to make Baghdad before nightfall, I left Amman at three in the morning and was at Jordan’s border with Iraq by dawn, ready to make the remainder of the six-hour drive.

Countless rows of refugee tents were a new feature of the border landscape. From a distance, I could make out the forms of American soldiers in desert camouflage standing near their Humvees on the Iraqi side of the border. For years I had been something of a novelty in this part of the world. Now I was just another damned American in Iraq.

After a slow advance to the checkpoint we encountered our first coalition soldiers, a cadre of Kuwaitis who were organizing the long queue of cars by shooting in the air and swearing. At the front of the line an American soldier greeted my Iraqi driver — now a friend. “Sabah al-khair,” the soldier blurted in Arabic soaked with a deep-south drawl. 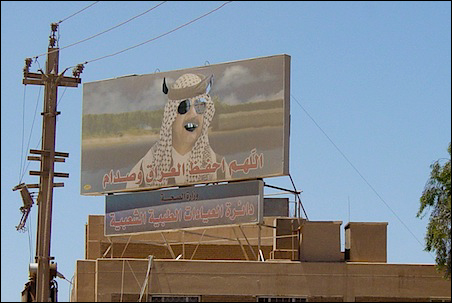 MinnPost photo by Jeff Severns Guntzel
A portrait of Saddam Hussein, defaced after the fall of Baghdad.

Ominous signs
After countless hours of watching it on CNN, it took a Floridian with an M-16 and a thick southern accent holding my passport in his leathery hand to make it all real for me: the Iraq I knew was over. But what would take its place? I found the answer scattered all over Baghdad.

Walking up to a statue of Saddam Hussein with its top half blown off I nearly kicked an unexploded RPG, a rather profound accidental metaphor — the dictator was gone; an explosion was imminent.

On a rooftop across a narrow street from my hotel, young Iraqi men held vigil day and night with AK-47s. They played cards for much of the day and fired their guns for much of the night. I had no idea what the shooting was about — it was happening everywhere in the city. A man I met on another narrow street in another neighborhood explained it to me: “Some shoot to kill, some shoot as a warning, and some shoot to let you know they have guns to sell.”

It took me a week to find my closest friend in Iraq. He was gaunt and had a gash on his forehead. He had been volunteering at a hospital in a Shia neighborhood — a man I knew to be terrified of needles and the sight of blood was administering emergency nursing services to victims of bombings and other violence. He wouldn’t tell me how he got the gash. Whatever future there was for Iraq, I was convinced would arrive on the backs of people like him — compassionate, smart, engaged. He stayed longer than many like him, but he eventually left. Brooklyn has him now, and for the foreseeable future.

On a major thoroughfare near the Tigris River that bisects the city I stumbled into a protest march. They were the members of Saddam Hussein’s army and they were demanding their paychecks. The “or else” was explicit. The opportunity to support this large segment of Iraq’s population was blown, however, and the consequences historic. One month later an order from the head of the transitional American government in Iraq dissolved the army, handing the resistance a vast pool of recruits who had training, weapons and a combustible resentment.

There was no clear organized resistance when I was last in Baghdad. On a bridge near my hotel an Iraqi man walked up to an American soldier whose back was to him, raised a pistol, and put a bullet in that soldier’s head. People talked about it as an isolated incident and that seemed probable.

The beheadings and the kidnappings would begin soon, as would the forced expulsions along ethnic lines. Abu Ghraib would happen, and the bombing at U.N. headquarters. Americans would die by the thousands and Iraqis by the tens of thousands — some say the hundreds of thousands.

All of this, and the scene I really can’t shake is so mundane I hesitate to share it here but for the fact that no other better illustrates the delusions and complexities of the blood-folly that began in 2003.

It happened in a booth at my favorite Baghdad restaurant, where I was eating with two friends — an Iraqi who was helping me to get around town and a Palestinian who joined me for the trip as an interpreter and co-writer. When we pulled up, there were two Humvees taking up three parking spots. Inside, six soldiers were seated at two tables. I couldn’t stop staring. It was early in the trip and I was still adjusting to the new realities of Iraq. “This is their country now,” an Iraqi friend had told me that day with tears and a trembling voice.

One of them, a woman, stood up and walked across the room to our booth. “Just arrive?” she asked. I nodded. She held out her hand. I managed a smile and gave her hand a limp shake. “Welcome to Iraq!” she said, smiling.

The Baghdad I knew: Before and after the fall