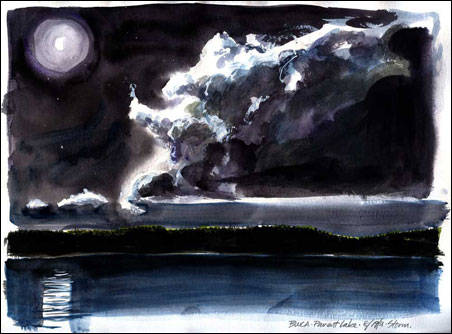 Illustration by Hugh Bennewitz
Hugh Bennewitz was camping in the BWCA the night of the storm that started the Pagami Creek Fire. He drew the storm as it rolled in, then added watercolors.

By now most of us get it, or have at least heard it: fires are good for the forest. But what does that mean? University of Minnesota forest ecologist Lee Frelich can help. He explains what the Boundary Waters Canoe Area would look like if fire were somehow completely controlled for the last century. The short answer: a sea of half-dead Christmas trees.

“You would get essentially a sea of Balsam Fir, then the budworm would come, and it goes out and kind of kills half the trees,” Frelich explains. “So you’d have this kind of crappy, half-dead forest which is full of brush and branches and which is not very attractive for people or wildlife.”

There are are actually patches of the BWCA forest that are like this, and best anybody can tell, it would just stay like that indefinitely, or until lightning strikes, as it did in the Pagami Creek Fire.

“That is a setup for a giant explosion in fire,” says Frelich, “The whole BWCA would burn. It would burn Ely and Isabella; there would be no stopping it.”

But that is really just explaining why an absence of fire can be bad. One fascinating and little known piece of the fire ecology puzzle are the species of trees that actually fire dependent. The Jack Pine has closed cones that only open to release their seeds when waxes on the cone melt in the heat of a fire.

“Camping in the Boundary Waters,” Frelich says, “I’ve taken twigs with cones on them from the forest floor and put them next to the campfire. They are exposed to the heat and they wait 10 or 20 minutes, then they pop open. The next morning you can shake that twig and the seeds will fall out. They are kind of programmed to wait a little bit, you know, because if the seeds fall directly into the fire, they’ll be consumed.

“The seeds fall over the next few days, so they’re likely to land on a forest floor that is no longer on fire. In the case of the jack pine, the seeds germinate much better if the leaf litter has been burned away. Jack Pine, in fact, has drier foliage than other species of trees which makes it easier for a fire to run through Jack Pine. It is almost as if they purposely promote fire.”

There is a whole system in the BWCA, Frelich says, that is adapted to fire. Another wonder of fire ecology: Bicknell’s Geranium. Its seeds will only germinate in sunlight. Buried under leaf litter, the seeds just wait for it to be burned away. After the 2006 Cavity Lake Fire in the BWCA, which burned 32,000 acres, the wild geraniums were everywhere. “That site had last burned in 1801,” Frelich says. “Those were 200-year-old seeds germinating.”

So what, exactly, will BWCA regulars and other curious explorers see next year when the snow melts and the newly burned forest is fully exposed?

“They will see the patches of live trees — green against a black background,” Frelich says. “And then by the middle of the summer, the ground will start to green up. There will be the geraniums. Raspberry plants can have seeds that have been in the soil for decades, and those will sprout. Blueberries will sprout from their roots underground.

“Right away next spring, one interesting thing they will see where there were black spruce is that a lot of the trees were connected underground. You can’t see it until the fire burns away the forest floor, but a lot of the small black spruce trees, you will see they were actually branches of another tree that touched the ground and rooted.

“Any wildlife that wanders through is easy to see because they do not have cover. That is exactly why a lot of wildlife avoids walking through in the first year, because they don’t want to be out there in the open where predators can see them. On the other hand, you can see them from a much greater distance.

“By the end of the first summer, you’ll see Fireweed, which has a bright pink flower. Its seeds are plumed like dandelion seeds and they can come in from miles away.

“By the second summer, you’ll probably see prolific seedlings and saplings of aspen and birch. By the fourth and fifth years, that’s when the berries are the most prolific. Raspberries, blueberries and berries of all sorts. By then, the saplings of trees will be four or five feet high. That’s when it’s really ideal for moose — birch and aspen that are their favorite thing to eat, and there will be billions of them, and they will all be within reach. In an 80-year-old birch forest, the moose is not going to be able to reach the crowns of the trees. But in a young forest like that, they have all the food they want.

“The population of Black-backed Woodpeckers will go up. You don’t see many of them in mature, closed-canopy forests, but after these big disturbances, by a few years later, you can be sitting there and eating lunch and a dozen of them might fly by.

“Then after about 10-15 years, there will actually be a young forest that you can walk under. And by then, the geraniums will be gone and the Fireweed will be gone, and the berries will still be in a gradual decline because as the trees grow, they all get less sunlight.”

It will be a land of endless wonder and diversity, as it as before the fire. Frelich says it is the best time to camp in the BWCA. “I think if we did a better job of educating the public that there are lots of interesting things to see in recently burned forests,” says Frelich, “then it would not be such a problem for local outfitters who think nobody will come.”

Related: Famous Minnesota fires: A look back in photos

Why forest fires are good — and amazing