News
Learning Curve
MinnPost’s education reporting is made possible by a grant from the Bush Foundation.
Oct. 26, 2011 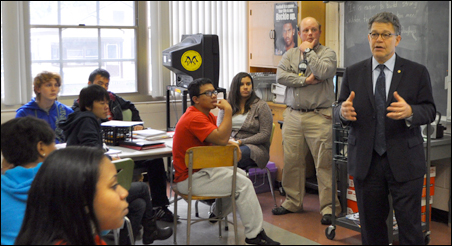 On Tuesday, Sen. Al Franken stood before a whiteboard at Minneapolis’ Patrick Henry High School constructing a diagram that, as he added triangles and boxes, came to resemble the world’s most complicated Chinese takeout container.

It was in fact the Pythagorean Theorem, an ancient mathematical statement about triangles containing a right angle. Franken’s rendition also contained numerous squiggles, and as he worked he narrated its shortcomings.

“Let’s say this is actually a square.”

“Imagine this is better than it is.”

It was a tough crowd. Franken had tried a little standup — “see, that’s how you get to be a senator, you figure out that calculus follows precalculus” — offered a few beltway-jargon aphorisms and even told a story about his 6-year-old self involving Sputnik.

The 21 students in Ryan Voeks’ class were exceptionally polite, but clearly nonplused — the arms race? — until he started working through the equation, at which point they were only too happy to coach their guest.

When the theorem was proven algebraically, everyone clapped. Franken was visibly cheered.

Sees bill as ‘real improvement on NCLB’
The senator’s visit to Patrick Henry, located on the city’s far north side, was intended to give him the opportunity to talk about the U.S. Senate Health, Education, Labor and Pensions Committee’s markup last week of a proposed overhaul of the failed No Child Left Behind education law.

A member of the committee, Franken depicted the bill, which faces uncertain reception by the entire Senate on Nov. 8, and quite possibly a wholesale rebuff by the House of Representatives, as a bipartisan victory and a “real improvement on NCLB.”

True statements, and yet neither says much — and certainly nothing as quantifiable as Pythagoras’ ancient theorem.

After four years of debate, Congress last spring deadlocked over the reauthorization of the nation’s 10-year-old guiding education reform law. Over the summer, Rep. John Kline, R-Lakeville, head of the powerful House Committee on Education and the Workforce, announced his intent to reform NCLB “piecemeal,” possibly because he lacked consensus within his own caucus.

In response, U.S. Secretary of Education Arne Duncan announced his own plan, which threatens to end-run Congress altogether. Duncan invited states willing to commit to a list of reform strategies he favors to apply for waivers from compliance with NCLB.

More than 40 states have either applied or announced plans to do so. Minnesota is thought to be a strong contender.

A compromise measure
In a possible attempt to forestall Duncan, the Senate Education Committee last week forged a compromise that does away with NCLB’s most problematic provisions and improves on its strengths, but isn’t likely to make anyone truly happy.

Some pundits are predicting the Senate will approve the overhaul quickly so Duncan cannot issue any waivers, while others say it’s D.O.A. All say it’s likely the best polarized lawmakers can manage.

Before NCLB, no one had systematically measured U.S. students’ academic proficiency by race, socioeconomic status or special-ed classification. But the reform law stopped short of defining proficiency or spelling out how to measure it — anathema to political conservatives. 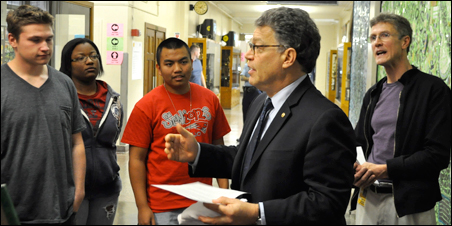 Ten years later, the scope of the problem is clear but so is the fact that all schools, good and bad, are struggling with the perverse incentives created by NCLB’s tests and penalties. Some states have lowered the bar; those that haven’t are paying the price.

Polarization has intensified
At the same time, the political tension between those who would get the federal government out of education completely and those who are convinced the achievement gap will close only under pressure has only intensified.

And with no end to the polarization in sight, lawmakers risk doing exactly what members of both parties now agree their predecessors did when they drafted NCLB: saddling education with policy prescriptions that are based not on proven, replicable strategies so much as promising ideas.

For example, the bill would replace NCLB’s requirement that schools and districts make Adequate Yearly Progress toward fixed numerical performance targets — which often don’t translate into higher achievement levels — with a requirement that they show unspecified growth.

Even though it would scrap official targets, the law would require officials to employ particular remedies in the lowest-performing 5 percent of schools and the 5 percent with the worst achievement gaps. The top 5 percent of performers would be labeled blue-ribbon schools.

Specific “turnaround” models for overhauling failing schools are laid out in the bill, but states that come up with better ideas are free to ask Duncan for permission to innovate.

States would control most
The other 85 percent? Those would be the province of the states, to which the GOP’s federalists have fought to return control.

Some of the Minneapolis Public Schools brass who accompanied Franken on his tour doubtless bit their tongues while he described his staunch conviction the law must lay out specific turnaround models. With several schools that have been “fresh started” a handful of times to no end but churn, district administrators have said they hoped whatever replaced NCLB would allow them to try to do better.

Indeed, what has worked better for the district recently is to continually assess which interventions are proving effective in consultation with the state Department of Education, replicate them where appropriate and discard the others. MPS administrators had harbored some hope that their process might trickle up.

Another controversial portion of the compromise involves the evaluation of teachers and principals. An earlier version called for assessing their job performance in part according to student test scores.

Teachers unions lobbied against the provision, arguing that not only does the overhaul not define adequate growth, no one yet knows how to assess a teacher’s impact on that growth or how much of their evaluations should be based on student outcomes.

Weaker provision for evaluation passed
In the end, a weaker evaluation provision passed the Senate committee, provoking criticism from Duncan and others. Franken said yesterday that the compromise hands some authority to the states and calls for a combination of evaluation factors including peer review.

One of the criticisms leveled at NCLB by policymakers on both sides of the aisle is that it lays out one-size-fits all solutions to problems that might be better solved at the local level. Duncan has come under fire for creating competitive grants and other programs that ostensibly encourage states to think outside the box but that also make plain exactly what types of innovation will be rewarded.

At Patrick Henry, Franken’s staff had to physically shepherd him out of the classroom, away from his crazy-quilt version of the Pythagorean Theorem. “I’ve got a secret thing for second-year algebra,” he confided.

If Franken ever gets tired of politics, earnest young audiences await him.