News
Learning Curve
MinnPost's education reporting is made possible by a grant from the Bush Foundation.
Feb. 17, 2014

When Hurricane Katrina flooded New Orleans in 2005, eight and a half feet of water rendered the St. Bernard Housing Community completely uninhabitable.

The city’s second-largest public housing complex, St. Bernard had been in decline for years. More than a third of its 1,400 dilapidated units were boarded up. In the four years before the storm, it was the site of almost 700 felony crimes, including 42 murders.

More than half of the 5,800 people displaced were children with no clear-cut path out. Only half of the projects’ adult residents had jobs. Fewer than 8 percent had a college degree; nearly 12 percent had less than a ninth-grade education.

Education — as a tool to break the cycle of poverty and as a community anchor — is at the center of the redevelopment that’s bringing families back to the neighborhood. In October, a $9 million early childhood education “showroom” opened where the project was razed.

Inside, 150 infants, toddlers and preschoolers are being cared for in the newest program operated by Educare, a national organization that is succeeding at closing the school readiness gap between impoverished children and their more affluent peers.

“They are the Cadillac in my mind,” said Art Rolnick, a University of Minnesota economist who has written extensively on the high return on public investment in high-quality early-ed programming.

Showroom is the right description for the facility. It’s impossible to tell until it’s pointed out, but many of the 12 classrooms are located within brick-and-glass rectangles that used to be row houses. New brick-and-glass passages connect them and contain airy spaces for community meetings, teacher training and family engagement staff. 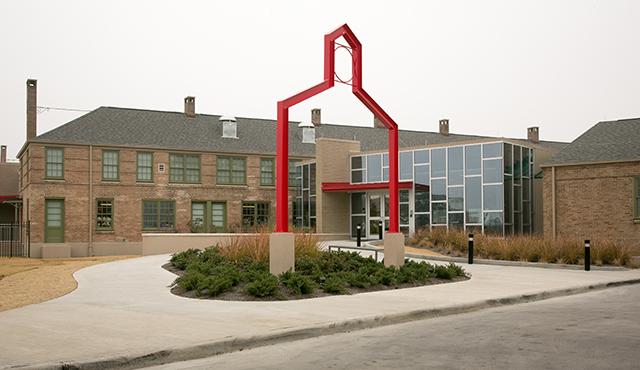 Courtesy of Education Writers Association/Kathy Anderson
Many of Educare’s 12 classrooms are located within brick-and-glass rectangles that used to be row houses.

The center is ringed by the first 600 of what eventually will be 1,000 new housing units. One-third will be public housing, one-third will be affordable and the final third market-rate.

There’s space next door for a K-8 school that’s yet to be built, and two blocks away a new high school is under construction. An 18-hole golf course under development at an adjacent city park will help to subsidize education programming in the redevelopment.

The center opened its doors less than four months ago, but it already has a waiting list of more than 200 students.

It’s a showroom in another sense, too: If things go as the project’s leaders hope, other child care programs in the region will emulate the research-backed mix of strategies in use in the facility, Educare’s 19th facility nationwide, will ripple out, raising the quality of other programs.

Indeed, a longitudinal study under way at the University of North Carolina-Chapel Hill suggests that the Educare model is getting results like those reported on by University of Minnesota Professor Aaron Sojourner last month: Not only do program graduates arrive at kindergarten as prepared as other kids, the benefits persist as they age.

This kind of quality is expensive. It costs about $18,000 per child per year to provide Educare’s quality services, even in lower-wage Louisiana. Studies by Rolnick and other economists consistently show that high-quality pre-K returns as much as $16 for every $1 of public money invested.

The backers of the New Orleans project heard this message over and over as they traveled the country looking for the most promising redevelopment models.

“Seven years ago I don’t know that I would have been a real early education advocate,” Gerry Barousse, chair of the boards of both Educare New Orleans and the civic group in charge of the redevelopment, the Bayou District Foundation, told a recent group of visitors. “I didn’t really understand.”

Researchers know that the first five years of life are a crucial window. The brain is developing, determining the cognitive abilities and social-emotional skills that have an outsized impact on achievement. Domestic violence, addiction, untreated adult mental health issues, joblessness, lack of parental education and other challenges in the home disrupt this process.

Everything under one roof

The first site opened in 2000 in Chicago by the Ounce of Prevention Fund, an early childhood advocacy group that operates home-visiting, Head Start and Early Head Start programs. The idea was to put everything that research suggests is effective under one roof—full-time, year round.

Within a couple of the years the program came to the attention of Susan Buffett, philanthropist and daughter of Warren Buffett. She set out to replicate the center first in Omaha and then throughout the country via the Buffett Early Childhood Fund.

Educare families must all be below Head Start’s poverty threshold. Beyond that, students are given preference for admission based on the number of other risk factors a family faces. The more fragile the family, the higher on the wait list the kids are placed.

Because those risk factors can mean psychological attachment disorders, the ratio of adults to kids is kept low and caregivers and children are kept together for multiple years.

Each classroom has three teachers, at least one of whom has a bachelor’s degree in early childhood education. The mixed-age infant-toddler rooms have eight children, who stay with the same team of adults until they are ready for a preschool classroom of 17.

The classroom caregivers are overseen by master teachers who provide ongoing training and who work with data. Each site also hires a Ph.D.-level evaluator to provide feedback. One Friday a month is dedicated to professional development, with topics decided upon as staff analyze information on children’s welfare.

Only a few months on the job, the New Orleans teachers are reporting high levels of behaviors and needs associated with mental illness in the family. Upcoming trainings will likely focus on ways caregivers can help young children cope with associated stress, according to School Director Rafel Hart, coaxed back to his hometown from Educare’s Seattle location.

Parents are asked to volunteer 100 hours a year and communicate frequently with the social workers who do everything from intake assessments to helping to find financial assistance if the stability helps a parent climb above the threshold for eligibility for a particular funding stream.

Centers make intentional use of curriculum, but not in the sense the term is usually used. Here it means a focus on social and emotional development and a relentless effort to expose kids to language — a direct predictor of kindergarten readiness.

The number and complexity of words spoken directly to children by caregivers has a direct impact on brain development. So teaching, in this setting, turns one- or two-word interactions into sentences, involves asking questions that encourage children to formulate longer and more complex answers and allowing the conversation to go where the child steers it.

Where is the heart?

One recent morning the kid-directed curriculum in one of the preschool rooms looked an awful lot like a group of kids giving their lead teacher a checkup. While one placed a floppy pink hat atop the patient’s head, another waved a toy stethoscope in her direction. 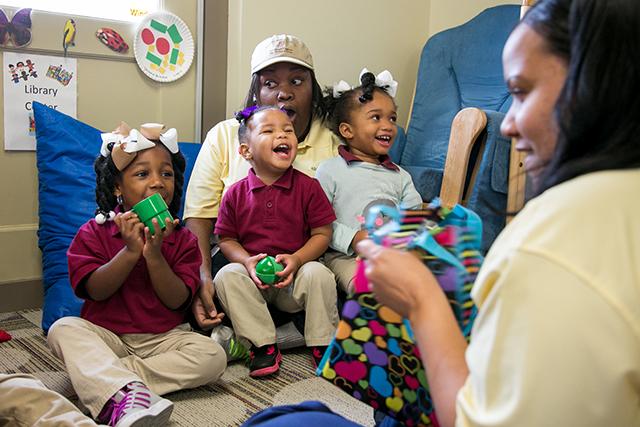 Courtesy of Education Writers Association/Kathy Anderson
Here curriculum means a focus on social and emotional development and a relentless effort to expose kids to language — a direct predictor of kindergarten readiness.

Where, the teacher asked, was everyone’s heart? As kids pointed, she asked them to describe the spot their fingers were touching. And who was the person with the stethoscope? Through what used to be someone’s front window the game was easily visible from the office of the master teacher who would provide coaching later.

Not only has the pre-K network gotten consistent results in each of the 18 communities that got centers before New Orleans, part of Educare’s mission is to make sure other facilities in those areas have access to its top-flight teacher professional development.

None of this comes cheap. Before each site opens partners from both the public and private sector sign contracts outlining relationships and responsibilities. Head Start and Early Head Start generally fund 50 percent to 60 percent of operations.

State child care dollars and local school district pre-K funds must be available to supplement the federal funds. And families often must make co-payments of $15-$500 a month. But the lion’s share of the gap left over after public dollars are exhausted is closed by private philanthropic funding or from an alternative revenue source.

In New Orleans the project has the support of the W.K. Kellogg Foundation and Kingsley House, a local agency that has long operated Head Start programs in the area. Additional revenue will come from the golf course planned for the redevelopment.

A push in Minnesota

According to Rolnick and others involved in the push to create a system for steering state dollars to high-quality programs in Minnesota, there was an effort several years ago to bring Educare to Minneapolis. Local Head Start providers, which contract directly with the federal government, declined to dedicate their funding.

While many Head Start sites are high quality — and a pre-K ratings system now rolled out statewide will measure their performance, too — the program was started as an anti-poverty effort. Unless parents, who are often employed by the programs their kids attend, can come up with state or private dollars care often is half time and only during the school year.

There are some programs in Minnesota that are trying Educare’s “braided-funding” approach, according to Barbara Yates of Think Small, an early-ed advocacy group.

Invest Early Itasca is run by a school district using a unique joint powers agreement that incorporates Head Start dollars and enjoys support from the Blandin Foundation, for example. Rochester is another place where a partnership is blending funding streams to pay for quality.

Details of Obama’s proposal were released too late for thorough analysis for this story, but a quick scan suggests that Head Start and Early Head Start funds will play a major role in expanding access to pre-K programming. And emphasis will be on programs for 4-year-olds.

When school starts in August, Educare’s current 4-year-olds will leave. They’ll be better positioned for kindergarten after 10 months of early ed than their peers. Educare grads in other cities who enrolled as infants or young toddlers, meanwhile, continue to perform on par with their wealthier classmates in third- and fifth-grade follow-ups.

Right now, only 32 of Educare New Orleans’ kids are 2 or younger. The goal is to replace next summer’s graduates with the youngest and most at-risk kids on the list.