News
Learning Curve
MinnPost’s education reporting is made possible by a grant from the Bush Foundation.
March 27, 2014 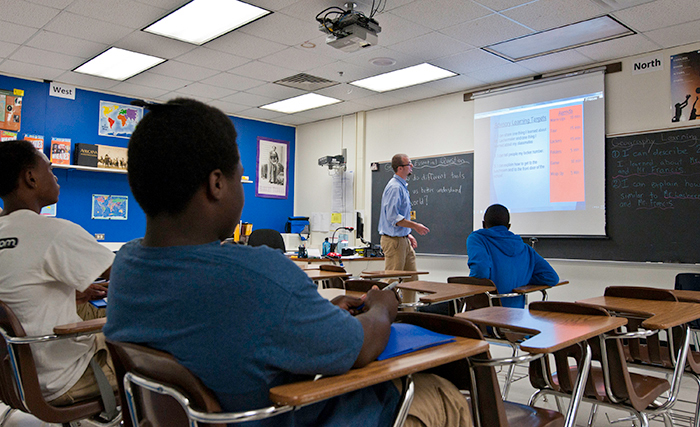 MinnPost photo by Bill Kelley
Are resources being distributed equitably, and would a realignment in which the money more faithfully followed students, and not teachers, create incentives for wealthier schools to try to serve more challenged students?

In a culture that has historically regarded every conversation about resources as a zero-sum game, the topic of equity has a tendency to be painful for the have-nots and frightening for the haves.

Nowhere is this more true than in Minneapolis Public Schools (MPS). And nowhere in the district is it more red hot than when it comes to the issue of teacher assignment and compensation.

As in every other school district in the country, state and federal funds are supposed to follow students, with extra money directed to schools that have concentrations of kids who arrive with multiple challenges.

The most common question prompted by this kind of disparity is whether the students facing the most academic challenges are getting the best teachers — the presumption being that experience equals effectiveness. Teacher evaluations now in their second year in MPS should help to answer that.

But there’s another set of questions posed by the data: Are resources being distributed equitably, and would a realignment in which the money more faithfully followed students, and not teachers, create incentives for wealthier schools to try to serve more challenged students?

Among mainline programs, Lake Harriet’s lower campus boasts the highest median teacher salary, at $80,355, not including benefits. Located a few blocks from its namesake landmark, the program is a popular option with wealthy southwest Minneapolis families who compete for admission.

Some 85 percent of its K-3 students are white. Fewer than 8 percent of the school’s students qualify for free or reduced price lunch. That poverty level is so low that the school does not qualify for federal Title I funds, the main pot of money that is supposed to offset the challenges of educating poor children.

A few miles to the north, Bethune Community School has a student body that is entirely impoverished and the lowest median teacher salary in the district, at $49,449. One fourth of its K-8 students receive special education services and a third are homeless or lack stable housing.

And because 94 percent of Bethune’s students are minorities, nearly a third more than the district as a whole, it’s considered racially identifiable — the state’s legal definition of a segregated school. A little further to the north at Lucy Laney, also racially identifiable, the median teacher is slightly higher at $51,510.

At budgeting time, however, the district bases individual schools’ budgets on the average district salary — this year $66,412 per teacher, plus 31 percent for benefits. Schools may use discretionary funds to “buy” additional teachers at this rate to bring down class sizes or for particular programming.

For more than a decade, parents and other stakeholders have argued that this budgeting process obscures a fundamental inequity. The formula, they note, shortchanges schools with the most poorly paid teachers and subsidizes those with better-paid faculties.

To make the chart below, a list of every MPS teacher’s actual pay was used to calculate each school’s median salary. This was juxtaposed against the schools’ poverty rates, which are closely correlated with minority population. The line across the center of the map shows the district median salary, $70,053.

Source: MinnPost analysis of Minneapolis Public Schools data, via Chris Stewart
Schools on the left side of the chart, with the lowest proportion of students receiving free/reduced price lunch, also have some of the highest median salaries in the district. A table of the data used for the chart is available below.

The highest median salaries by building are displayed in the upper left. The schools represented by green markers are programs that do not serve enough impoverished students to qualify for federal Title I aid. Six of MPS’ seven non-Title I schools occupy this spot on the map.

On the opposite side of the chart, schools identified by orange markers are racially identifiable; they have concentrations of minority students that are 20 or more percentage points higher than district averages for their grade levels. These programs meet the state’s definition of racially identifiable, or segregated, schools.

Many of the other programs on the far right side of the chart are just as heavily minority but are not among the types of schools that have to report under the state’s desegregation laws. (Not appearing on the map at all are some specialty schools, like stand-alone special-ed programs, which have very high, uncommon costs, such as staff psychologists.)

A 2007 study initiated by a group of MPS parents and conducted with assistance from the University of Minnesota’s Center for Regional and Urban Affairs found similar results. Of 28 schools with above-average percentages of students of color or impoverished students, 26 had below-average teacher pay.

Among other findings, that study reported that per-pupil spending on teacher salaries from the district’s general fund, the pot of money not earmarked for specific uses, ranged from $916 to $3,859, with poorer schools getting lesser amounts.

In recent days, the U.S. Department of Education’s Office of Civil Rights released a report on equity in American schools that found that minorities are three times as likely as white students to attend schools with concentrations of new teachers.

Add these to a mountain of research showing that teachers with seniority tend to gravitate to schools with fewer challenges. And to the common-sense proposition that teachers are most effective when they want to work in the school where they are assigned.

And while there are numerous experiments in teacher compensation reform under way around the country, teachers unions — badly battered on the political playing field over the last four years — have dug in here and elsewhere on attempts to change the role seniority plays in staffing.

MPS administrators were busy ironing out a snafu involving next year’s estimated school budgets and unable to respond to an interview request for this story. There is, however, a major change in the works that may help address the issue of equity in resources.

The district is moving toward adopting “weighted student funding,” a system now in use in a number of large districts including Baltimore, Boston, Cincinnati, Denver, Hartford, Houston, Oakland, San Francisco and Seattle.

Although details vary by community, the system allocates funding to students based on their needs. More dollars would follow a pupil who was learning English, for instance, or who is homeless. Funds could be adjusted to support district priorities, such as early literacy.

MPS is currently in the process of setting a threshold for academic programming for all schools. Right now, the amount of math, reading and other subjects students receive fluctuate widely.

Under the new funding system, expected to roll out in the 2015-2016 academic year, money would be budgeted to pay for this equitable level of programming, and schools can use the rest of their budgets to meet their unique needs.

What it doesn’t mean — at least not in the short term — is an end to the practice of allocating teacher salary lines by average salary. Nor does the future budgeting system come with new state or federal dollars for schools.

But it might entice back some of the families that have left MPS over the last decade. And it might fundamentally change the game to give schools incentives to compete for underserved students.

Data and description of data-processing techniques available on GitHub.

By Beth Hawkins and Tom Nehil