News
Learning Curve
MinnPost's education reporting is made possible by a grant from the Bush Foundation.
Aug. 29, 2014

Chances are you have never seen a Karner blue butterfly, which is native to the Great Lakes region. Often a mesmerizing shade of cobalt, its wings span just an inch. It is completely dependent for nutrients and a place to lay its eggs on wild blue lupine, which requires sandy, open expanses to flourish.

They were named in 1944 by novelist Vladimir Nabokov after a spot in New York where he could count on finding a sea of iridescent wings: “A place called Karner, where in some pine barrens, on lupines, a little blue butterfly I have described and named ought to be out.”

The butterflies do not migrate. Indeed, their range of travel is only about 1,000 feet. They are exquisitely sensitive to temperatures and to disturbances from things like vehicle traffic.

Because their sunny habitat is also prized by human developers, the Karner blue has been on the endangered species list in the United States since 1992. Once common in Anoka County, they are now bred in zoos.

The Karner Blue Education Center, which opens its doors this fall in Blaine, could not have a more fitting namesake. There is no other habitat like the new school, which is designed to serve disabled students, many with challenges related to sensory issues in their environments.

Built and operated by a consortium of northeast Twin Cities school districts, Karner Blue appears at first blush designed to harmonize with the state land that spreads out behind it. The real magic, however, is on display inside. 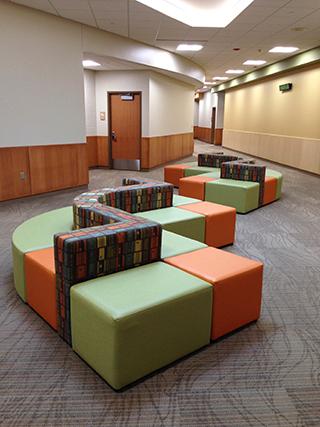 Photo by Gail Shore
Everything from the aesthetic choices to mechanical
systems at Karner Blue has been designed to smooth or
eliminate barriers to learning.

Drawing on years of staff observations, everything from the aesthetic choices to the building’s mechanical systems has been designed to smooth or eliminate barriers to learning. The facility is the first of its kind.

The school can enroll up to 150 K-8 students with cognitive disabilities, autism or emotional-behavioral disorders. And because it serves only students in the most restrictive level of special ed programming, families can’t apply directly to the program. The aim is to equip students with the skills to return to their home schools as soon as possible.

It is a cornerstone of the district’s efforts to manage the cost of the education federal law guarantees to even the most severely disabled student. Even with a $15 million price tag, the facility should actually save money for 916’s member districts.

The idea for Karner Blue was born six years ago. One of a number of Minnesota education co-ops, Northeast Metro Intermediate School District 916 provides technology and education services that are too specialized for its 13 member districts to offer in a cost-effective manner. Among those are special ed programs for children with the most unique and profound cognitive and behavioral challenges.

A decade ago, the number of students needing these services began to mushroom, even while the age at which students needed those services fell. Theories on why vary, but there is general agreement that a sharp rise in the number of autism diagnoses is one factor. Another is a mounting crisis in children’s unmet mental health needs.

With small, specialized programs spread over a large geographic area, transportation and staffing soon became real challenges. At the same time, teachers and administrators were becoming increasingly aware that 916’s facilities contributed to those challenges—particularly where safety was concerned.

Much of the time standalone special ed classrooms and facilities feel ad hoc at best, and prison-like at worst. As she surveyed 916’s members about their wish lists, Superintendent Connie Hayes heard one thing at the top of all of them. “They wanted an environment that was warm and welcoming to families,” she said. Instead of compounding anxieties, the surroundings needed to be pleasant and inviting.

In the business of trying to identify and compensate for challenges that are not apparent to most of us, 916’s staff and special education teachers were overflowing with suggestions large and small. Though the budget was tight, the staff wanted both the building and the curriculum to relate to and capitalize on the nature just outside the back door.

The district drew on the combined expertise of the architectural firm BWBR and contractor Kraus-Anderson, which have worked together to design education centers and behavioral health facilities. Karner Blue incorporates the best features of each, as well as some invented by the team in response to educators’ observations.

Every millimeter is designed to minimize sensory stimulation, with a particular focus on transitions, both physical and educational. Transitions challenge all children — and teachers — to some degree yet can be huge hurdles to special ed students.

There are three separate front doors, for example, so that students are not crowding in — a surefire way to start the day on edge for many. Sidewalks are curved and the beams holding awnings aloft curve in, serving as a visual cue that there’s an entrance ahead.

The halls that branch out are curved so as to provide no sightline to the exits, and thus no visual incentive to run for them. The passages are 16 feet wide, so that a student who has been pulled to one side by a teacher is not a physical disruption to others walking past. Wood panels on the lower halves of the walls will withstand kicks and punches.

All in all, it may not sound revolutionary, but it’s a big deal for teachers and staff in terms of managing the arc of the school day. An aggressive student who can make a hole in the wall can garner a lot of attention and bring an entire class to a halt, for example. A wall that can’t even be dented—and that is beautiful, to boot — minimizes the distractions a teacher must compete with.

It also means the district doesn’t have to engage in continual repairs or resign itself to a depressing environment—which has its own very real effect on learning. “When kids have something that is valuable they are less likely to damage it,” noted Dan Naidicz, the district’s director of special education.

The wainscoting material initially envisioned by 916 staff was prohibitively expensive, so Kraus-Anderson proposed a combination of reinforced drywall and wood paneling extending three and a half feet up the curved walls. “We made eight different mockups over six weeks for [district staff] to come out and test,” explained Jon Kuenstling, the contractor’s project manager. “With the radiuses in the walls, getting the wood to fit that shape was really hard. It’s warm and it’s visually stunning.”

Solid doors have paddles in place of handles, so teachers can open them with a hip — one of many features borrowed from the design of behavioral health facilities. A second set of hinges allows doors locked from the inside by a student to be opened from the outside.

A large number of 916’s students are too sensitive to noise and other stimulus to navigate a typical school building, where fluorescent lights hum and flicker and vents rattle. Karner Blue’s HVAC ducts are oversized so air doesn’t whoosh through them, and the systems are wrapped in insulation and funneled under the hallways so that classrooms may remain absolutely silent.

Solar tubes — some of them donated — bring daylight into the gym and a number of classrooms. In-ground heat extends several feet into the classrooms that branch out from either side so as to minimize the effect of temperature changes.

Large windows are located five feet above the floor in many instances so that movement outdoors is not a distraction, while small square windows near the floor frame an interesting plant or other natural feature, providing a vantage onto the outdoors without risking a loss of focus.

The classrooms, bearing different prairie habitat themes, are spread out over four wings configured for students with an array of needs. There are breakout spaces and calming nooks and pass-through-style teacher offices framed by big windows for collaboration and observation.

“In the past you had to take a disruptive kid out into the hall,” explained Hayes. “That would have an impact on the other kids and would dis-regulate the whole [class]. Then all of a sudden you don’t have enough adults.”

Everything curves. In the case of the tables, it’s to create distinct workspaces; in the chairs, to rock and sway with a student who either must wiggle or who is soothed by movement.

Climbing walls, swings and a number of other large-motor features are designed to help on cold days. Outdoor playgrounds anticipate children with rare issues, including disorders that compel kids to run toward open water. The property is fenced securely, but the fences are hidden by berms covered in prairie grasses. 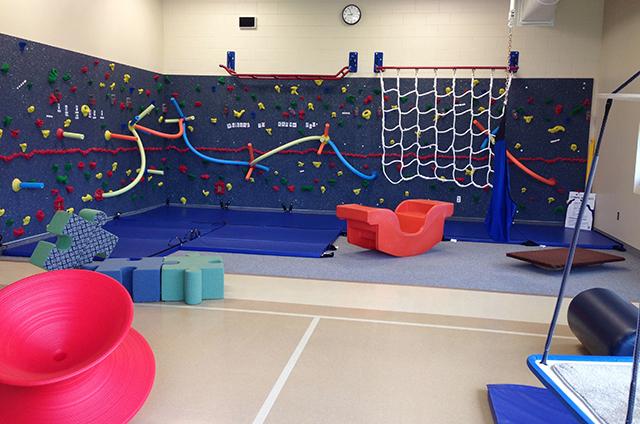 Photo by Gail Shore
Climbing walls, swings and a number of other large-motor features are designed to help on cold days.

The ceilings in a handful of rooms sport convex lights that illuminate copies of paintings by Vara Kamin. These “VK lights” are used in hospitals and other medical facilities where a meditative image can help relax patients. 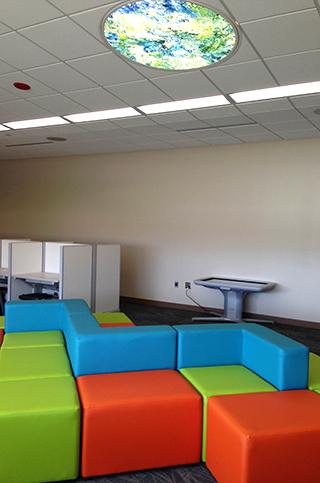 Photo by Gail Shore
The ceilings in a handful of rooms sport convex lights that
illuminate copies of paintings by Vara Kamin.

There are features to make life easier for the adults, too, including quiet, comfortable spaces where teachers can take their own sensory breaks. And there are showers, something experience has shown are needed from time to time.

Architects worked with the state Fire Marshall to classify the center as a behavioral health facility so that it could employ alternatives to conventional fire alarms and unlocked exits. Electronic boards throughout communicate everything from a message from the office to a fire drill. Doors unlock automatically in the event of an actual emergency.

The hope is that after Karner Blue has been in operation, some of the design innovations could have important applications in more traditional schools.

Earlier this year, 916 purchased land in Lake Elmo where the district envisions building a second facility. Design won’t begin until school has been in session for a full year at Karner Blue so district leaders will have an idea which features to replicate.

“It’s pretty amazing when it comes together,” said Naidicz. “We are very excited for our families. Our hope is this is a place where kids can learn skills and grow and eventually go back to a typical learning environment.”

The magic of Karner Blue