News
Learning Curve
MinnPost’s education reporting is made possible by a grant from the Bush Foundation.
Sept. 23, 2014

After four years of active duty as a Marine, Lydia Davey was pretty good at fear and intimidation.

She could stand up to it, and she could dish it out. Yet she felt helpless to do anything but watch, angry and isolated, as her way of relating to people damaged her civilian life.

After serving in Afghanistan and Africa, Davey was in college in the winter of 2012, struggling to reinvent herself, when a fellow Marine suggested the two go on a dogsledding expedition Outward Bound was conducting for veterans in northern Minnesota.

Davey hated the cold and imagined everyone else would be male — and Special Forces guys to boot. She signed up, anticipating a lot of yelling.

The bitter cold is a great equalizer, it turns out. And surviving eight days in it is a challenge that requires very different skills: compassion and love.

“Not once did they yell, even at critical moments of great stress,” Davey recalls. “I hadn’t realized until that trip that it was possible to lead with compassion.”

No matter what was at risk, the instructors on the trip responded gently and quietly to both the sled dogs and the taxed Marine, whose survival skills were honed in hot climes.

‘That’s how I wanted to live my life’

“What I saw there deeply moved me,” she adds. “When I got home I decided that’s how I wanted to live my life.”

The trip was exactly the kind of pivotal moment envisioned by Outward Bound founder Kurt Hahn, who would often remark, “There is more to us than we know.”

In October, the Voyageur Outward Bound School will celebrate its 50th anniversary. When alumni and interested members of the general public gather Oct. 12 at the Nicollet Island Pavilion, there will be countless transformational stories like Davey’s, as well as remarks by polar explorer and early Outward Bound instructor Will Steger.

Originally conceived by a German educator who believed in experiential learning, Outward Bound has operated in the United States since 1961. Started three years later, the Minnesota branch became the first Outward Bound to have girls and women on its courses and the first to create urban wilderness programs.

A recent push into the Twin Cities

While the program offers literally dozens of different wilderness programs for people of all ages, its most recent push is into the Twin Cities, where it has started programs in 10 schools and 27 nonprofits. It’s a natural extension of the group’s education philosophy.

“The mission is changing lives through challenge and discovery,” explains Voyageur Executive Director Jack Lee. “The vision is still rooted in us telling young people and adults, ‘You can do so much more than you know.’ ”

About one-fourth of the work the organization does out of its Ely base involves teens, who tend to show up with the same levels of anger as Davey’s fellow Marines. Instructors meet the frustration with compassion by design.

“It’s geared toward waking them up and showing them, ‘You are more than you know,’” says Lee. “A lot of it is listening and going where they go. We’re not therapists and we don’t pretend to be, but we are very good at helping people feel heard.”

Author Nancy Carlson dedicated one of her children’s books, “Arne Goes to Camp,” to Outward Bound, which she credits with changing her life radically and for the better in 1970.

At the time girls had little access to sports. “Of course we got into trouble,” she recalls. “We had so much time on our hands.” 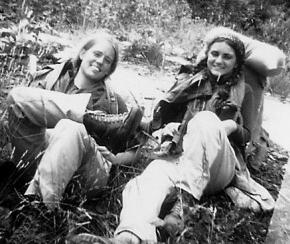 One morning when she was a 16-year-old “wild hippie,” Carlson’s father who, she says, “had had it with me,” announced they were going to Ward’s.

“He bought me some wool shirts and boots,” she recalls. “I said, ‘Why are we buying all of this?’ He said, ‘You are going to Outward Bound.’”

Freaked out, she talked her best friend into going with her. The counselors promptly separated them.

“I loved it the minute I was there,” Carlson recalls. “I needed that outlet. To be able to climb and canoe and move was just great for me. I discovered strength I didn’t know I had.”

The scariest part was anticipating her “solo,” where she would stay alone in the woods for four days, she says: “I’d been sleeping in the same bedroom as my sister my whole life.”

Carlson recently had occasion to look back at the journal she kept during her stint alone. “I’m going to die, I’m going to die,” she wrote in the moments before a huge thunderstorm. And then: “I made it.”

The simple act of being alone for four days changed Carlson. “I learned to love myself,” she says. “I liked who I was.”

For her, the lessons persist: “It really translates as you grow older, because if you are not afraid to jump backwards over a cliff, you’re not afraid to take on a new project at work.”

Research is mounting that the “soft skills” experiences that a wilderness expedition imparts can have an immediate impact on academic achievement, too. And adding outdoor experiences in an urban setting increases exposure, adds Lee.

For example, at one of Outward Bound’s St. Paul partner schools, River’s Edge Academy, students spend five days each fall on the Superior Hiking Trail in groups of seven students and two guides. The instructors return to the school once a month throughout the year to facilitate other adventures.

Lee sees even bigger opportunities with nonprofits that serve young people. Serving youth experiencing homelessness, for example, Youthlink has found that the mastery an expedition can impart can actually help interrupt the cycle.

Quantifying outcomes is a tricky business, but crucial if the group is to expand into more schools and youth programs. To that end, Outward Bound has a grant to work with the University of Minnesota’s Center for Applied Research and Educational Improvement to measure its impact.

Steger was an Outward Bound instructor for just two early years before leaving to start his own dogsledding school. He has always felt to strongly about the educational value of wilderness exposure that he got a teaching credential between college and his own move to the North Woods.

“I’ve always wished Outward Bound was part of a school system,” he says. “It’s learning through your own experience. It’s not chalkboard talk.”

And it’s not even clear to participants at first that they are about to be served a life lesson. At first most, particularly those who have signed up for winter camping or for climbing, are wholly absorbed in wondering how they will manage basics like sleeping and eating.

“If you’re not paying attention and learning skills, you’re miserable,” says Steger. “Most people who come in for a winter course, within three days they overcome this barrier in their minds and then they see this wilderness in winter in a new light.”

At first all that Davey could see was snow and ice and opportunities to not keep up with the men. No matter how long the day or how tiring its pratfalls, her instructors failed to lose patience.

“I felt … free,” she later wrote. “Mentally free to focus on the task at hand; emotionally free from concern about drawing a negative response; and spiritually free to soak in all the grandeur. Receiving kindness in high-stress situations unlocked a sense of wonder in me.”

Back in civilization, Davey bought the book, “Leadership the Outward Bound Way,” as well as works by Mother Theresa and the Trappist monk Thomas Merton. She moved to San Francisco and started a PR business, which she strives to run compassionately.

“My Outward Bound experience completely changed my experience of leadership,” says Davey. “I really had no idea that compassionate leadership could be effective leadership.”

In addition to the Oct. 12 celebration, Voyageur Outward Bound School also will host its first annual Adventure Challenge — a paddle, run, climb challenge — Oct. 11. For information and tickets to all the anniversary events, contact 651-292-1062 or register online.

Outward Bound, to youth and adults: ‘You can do so much more than you know’