You know education policy is one of the most contentious issues of the day. But did you know that teaching is the single largest occupation in the United States? So how is it teacher voices are so rarely heard in policy arenas?

Safe to say 2014 was the year teacher voices began ringing out loud and clear — and driving change. The following is a by-no-means-comprehensive list of educators who made themselves heard this year.

2. Tom Rademacher. No. 2 is practically a ringer on a list like this, having written for and spoken to audiences across the state and country during his tenure as Minnesota Teacher of the Year. Writing instructor Tom Rademacher knows he’s done his job well when he reads a piece of student writing that reflects a student’s voice, not the voice the student thinks the teacher wants to hear.

3. Jose Vilson. A bonus pick from Mr. Rad, as Rademacher’s students call him, is gifted writer Jose Vilson, a New York City teacher and author of “This Is Not a Test: A New Narrative on Race, Class, and Education.” Sayeth Rad: “Vilson speaks the truth, the often uncomfortable, powerful truth, about race and education. He is a rare teacher/writer who can see the whole map while staying centered in the experiences in his room.” I had the privilege last spring of hearing Vilson rap on stage about his calling and I concur.

4. Holly Kragthorpe. Minneapolis Public Schools middle-school teacher and Minneapolis Federation of Teachers steward Holly Kragthorpe started the year as a blogging fellow at MinnCAN and ended it with a fat file of publication credits from places like the Huffington Post. (And, um, MinnPost.) She’s ruthlessly pragmatic and totally the wrong shape to wedge into any ideological box.

5. Lee-Ann Stephens. A former Minnesota Teacher of the Year, Lee-Ann Stephens works with students of color enrolled in high-rigor classes like Advanced Placement and International Baccalaureate. Her voice is heard in a number of venues, ranging from the board of directors for the National Board for Professional Teaching Standards to the recently launched publication Education Post.

6. Mary Cathryn Ricker. St. Paul middle school teacher and longtime union president Mary Cathryn Ricker’s voice was magnified many times over this year when she was elected executive vice president of the American Federation of Teachers. As head of the St. Paul federation, Ricker crafted a steady stream of novel contract agreements — often with inconsistent support from district asking for change.

7. Braulio Carrasco. Minnesota Latino Educator of the Year and fourth-grade teacher Braulio Carrasco burst out of the gates this year as a leader of the League of Latino Educators, which works on making sure teacher and student voices are heard in the immigration reform debate, among other issues. In September, Carrasco & Co. organized an event to raise funds to defend unaccompanied Central American children in Minnesota.

8. Joe Nathan. One of my own teachers in another era in St. Paul, the Center for School change’s Joe Nathan has long written a weekly column now carried by some 15 newspapers. It was particularly valuable this year in helping to bridge a widening chasm between the amount of urgent education issues before lawmakers and a dwindling press corps. Nathan was the lone writer tracking wee hours skullduggery to try to weaken the state’s Post-Secondary Enrollment Options program.

9. Greta Callahan. After the Star Tribune published a story on evaluation data entitled “Worst Teachers in Poorest Schools,” Greta Callahan fired back with “Walk a mile in my teaching shoes,” a striking — and controversial unto itself — first-person account of conditions in Minneapolis’ poorest school. Bonus compounding voice fun fact: Mr. Rad had previously blogged about Callahan’s class and her prowess in convincing notables like mayors R.T. Rybak and Betsy Hodges to visit her kindergarten class at Bethune Elementary. 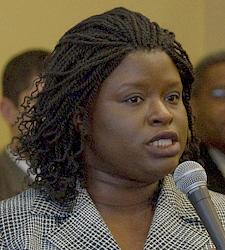 10. Nekima Levy-Pounds. A teacher of law at the University of St. Thomas, Nekima Levy-Pounds’ voice rang out seemingly everywhere this year: MinnPost, the Star Tribune and just this month in an inaugural podcast, “Real Talk With Nekima Levy-Pounds.” In addition, she helps lead several efforts to interrupt the school-to-prison pipeline, including a walk-in legal clinic where Minneapolis families struggling with the special education or disciplinary systems can get help.

11. Madaline Edison. We’ve saved Madaline Edison for last because she is an amplifier of teacher voices. Named one of the people most likely to shape U.S. education policy by Education Week in May, the former elementary school teacher founded the Minnesota affiliate of Educators for Excellence to give teachers a venue for raising their voices. In January, the local E4E blog will run a series of pieces by teachers on the #blacklivesmatter movement.