How is Minnesota’s economy doing? Are we falling behind other states? Last week, we looked at Minnesota’s average income relative to neighboring states and found that Minnesota has done better than its neighbors since World War II.  This week, let’s examine average incomes within the state to see what they tell us about economic growth in Minnesota.

It turns out that incomes across Minnesota vary greatly, but there are some definite patterns in the variation.

One concern you might have is that these data are not adjusted for prices across geographic areas. For example, last week I compared Minnesota’s average income with the national average, and did the same with our neighbors. It turns out that this is not a problem; the results I showed you last week hold even if you use real data (data adjusted for price differences) and then compare each state’s per capita real income to the national average. This is because price variations across and within states are relatively small.

The advantage of using nominal data (data not adjusted for price differences) is they are available for longer stretches of time. For instance, the Bureau of Economic Analysis provides real income data beginning in 1963, but we can go all the way back to 1929 if we use nominal data. By using nominal data and comparing it with a state or national average, we can get a better sense of how incomes evolved over a longer time period and be relatively confident that the trends are not driven by differences in prices.

Let’s start with a snapshot of Minnesota county incomes in 2009, the most recent year for which we have data. The map below shows per capita personal income by county as a percent of the state average. 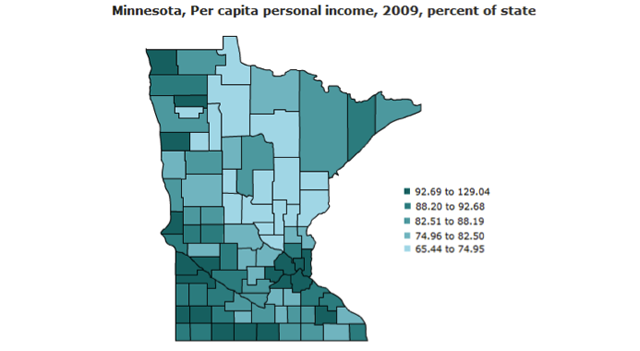 Notice the wide variation across counties, with darker colors indicating higher incomes per person and lighter colors showing lower income levels. For instance, the per capita income for the state as a whole was $41,854, with Mille Lacs County the lowest at $27,391 in 2009 and Hennepin County’s $54,008 the highest. Income levels congregate, too. For instance, the Twin Cities-area counties have relatively high incomes and a group of counties with lower incomes are concentrated in central and north-central Minnesota.

Metropolitan Statistical Areas and all that

We can zoom in further by looking at regional economies within the state using a concept known as Metropolitan Statistical Areas (MSAs). The federal Office of Management and Budget defines a Metropolitan Statistical Area as “an area containing a large population nucleus and adjacent communities that have a high degree of integration with that nucleus.” MSAs cut across both county and state boundaries and provide a better sense of regional economic activity.

Minnesota has seven MSAs, three that lie within Minnesota and four that straddle state borders with Wisconsin and North Dakota. They are listed in the table below.

For example, the St. Cloud MSA contains the parts of Stearns, Benton and Sherburne counties that are economically integrated with the core economy of the city of St. Cloud. 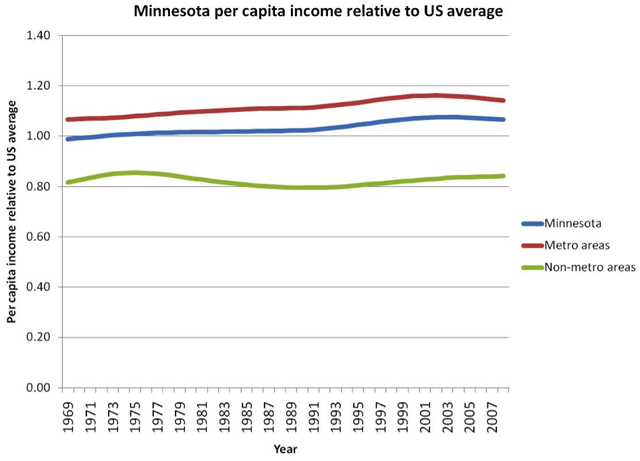 We can get more information by examining the MSAs more closely. The graph below illustrates the trends for Minneapolis-St. Paul along with the three MSAs located entirely within Minnesota (Rochester, Mankato and St. Cloud.) Income per person in the Twin Cities is clearly higher than any other MSA and grew faster than the national average over most of the period 1969 to 2009. 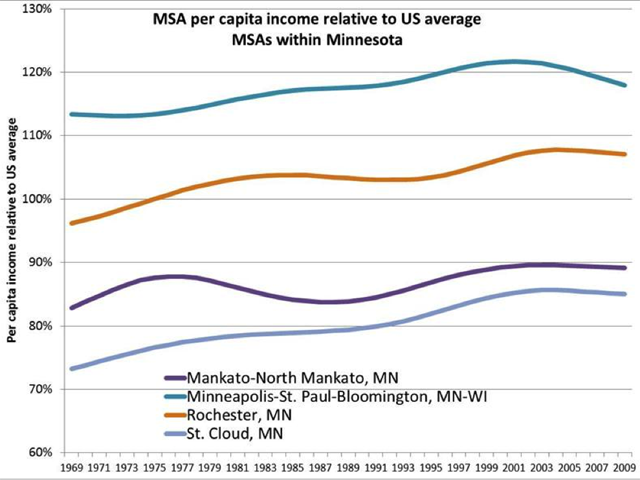 Rochester and St. Cloud also show strong upward movement for most of the period, as does Mankato in the past 20 years. Yet both St. Cloud and Mankato remain below the national average while Minneapolis-St. Paul and Rochester are above average.

A different pattern shows up when we study the MSAs on Minnesota’s borders with North Dakota and Wisconsin. First, while the within-state MSAs show consistent growth, three of the four MSAs exhibit a pattern I pointed out in last week’s post: rising incomes in the early 1970s and late 2000s, with a trough in between. This reflects the boom-bust cycles of agriculture, mining and oil extraction in the upper Midwest. 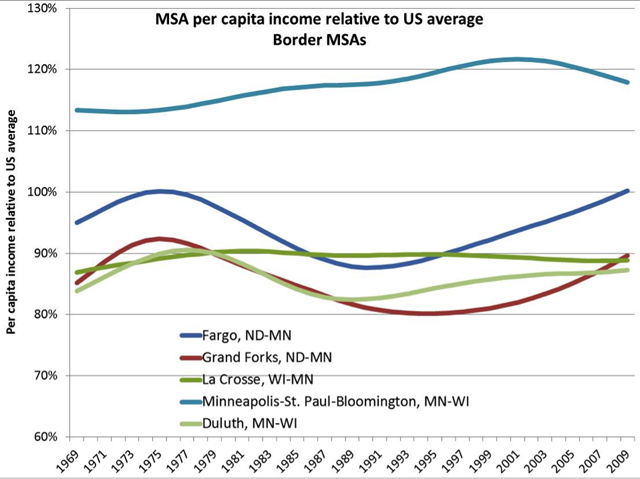 Second, all of these metro areas are at or below the national average in income per person. Fargo might join Rochester and the Twin Cities in above-average incomes if current trends persist, but there is no sign of other areas reaching this level. The LaCrosse MSA (which includes Winona) shows no upward trend, meaning that it grew at about the national average and remained at about 90 percent of the national level of per capita income.

We can put these data together with what we learned in last week’s column to tell a story.  Minnesota went from below average to above average between World War II and the 1980s. At the same time, the Twin Cities in particular and metro areas within Minnesota in general grew steadily as well.

This fits a pattern identified by economists and public policy analysts. In particular, Edward Glaeser of Harvard University and Richard Florida of the University of Toronto have shown that metropolitan growth drove broader regional growth since World War II. In particular, cities and metro areas are magnets for talented people who both invigorate existing businesses and create new, fast-growing endeavors. This in turn attracts financial capital and encourages further growth.

Minneapolis-St. Paul’s economy is tied to the broad trends in the national and international economies and this benefited the Minnesota economy. By contrast, the border cities such as Fargo, Grand Forks and Duluth have historically been tied to their local regions and experience the booms and busts experienced in those regions.

A big question for the future is whether these areas, along with Mankato, Rochester and St. Cloud, can tap into the same forces that allowed the Twin Cities to prosper during the past 50 years.