New ideas for reviving American manufacturing seem to appear every day. Many of these notions have merit, but most are built on a flawed premise: that the decline in U.S. factory jobs is a recent occurrence, one that can be reversed through tax cuts or trade policy.

Unfortunately, U.S. industrial decline is a long-run phenomenon and will not be reversed by short-term fixes. Let’s take a look at the trends and their implications.

Economists traditionally classify economic activity into three sectors: agriculture (including forestry and fishing), industry (including mining, construction, and manufacturing) and services (all activities not included in either agriculture or industry.)

You probably have a story in mind about what these data will tell us. The United States was primarily an agricultural economy through the 19th century; then, industry swept the landscape in the late-19th and early 20th century — with America standing as the industrial powerhouse of the world by the 1950s. Things stayed this way until the late-1970s and 1980s, when we first lost our edge to the Japanese, then to the Chinese, and have now become a service economy that doesn’t produce stuff.

This story isn’t quite right. Let’s start with where people worked. The graph below shows the distribution of the labor force in agriculture, industry and services from 1840 to the present. The part of the story about agriculture is clearly true: Beginning in 1840 at roughly 70 percent of the labor force, agricultural employment fell to about 40 percent in 1900, 10 percent in 1950, and remains at about 2 percent today. 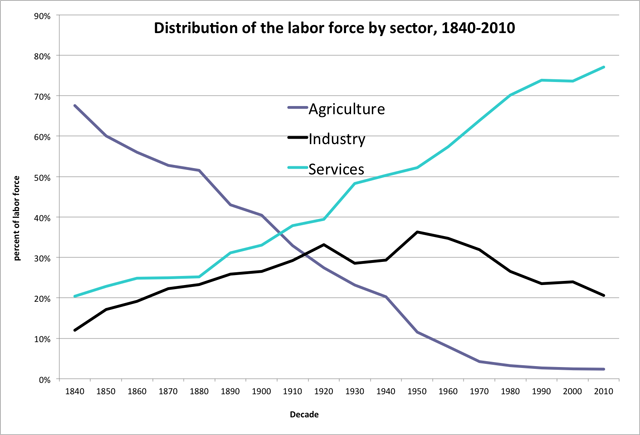 Next, let’s examine the service sector. Here’s where the surprises begin. In terms of employment, the second largest sector was services, not industry. In fact, service employment exceeded industrial employment throughout American history. Looking at industry, the closest that sector got to services was in 1880!

A similar story emerges when we look at output produced in agriculture, industry and services. Again, the agricultural sector originally accounted for the largest share of output, but services caught up and exceeded agriculture by the 1880s. 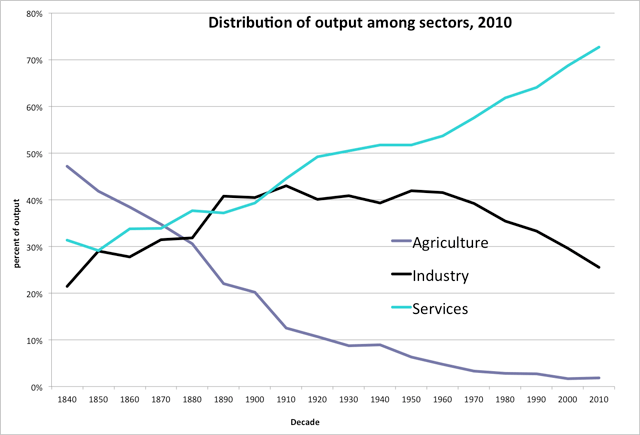 Industrial production kept pace until 1910, but after that services pulled ahead and never looked back. Since 1950, the share of output produced in industry has steadily declined, falling from about 40 percent of output to about 25 percent today.

The story since World War II 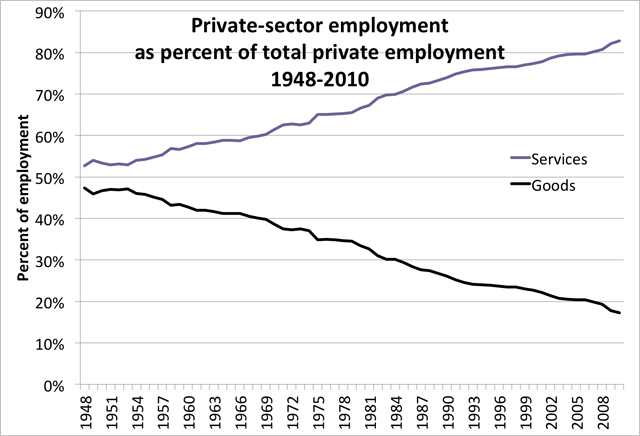 Since World War II, the share of private employment in goods production (including manufacturing) has steadily declined from just short of 50 percent to just fewer than 20 percent. 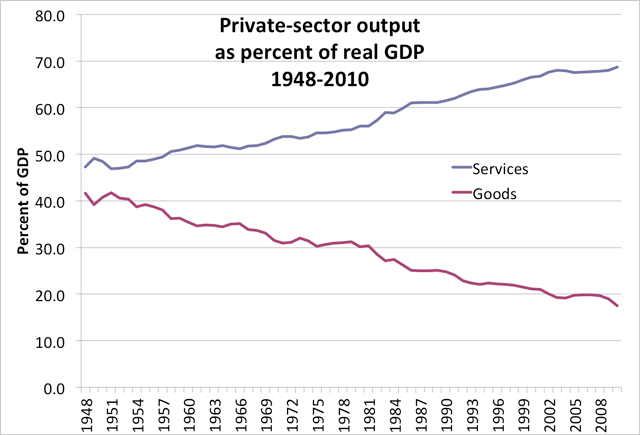 A tale of two causes

To understand the long-run decline in industry, we need to look at the periods before and after World War II separately.

Before World War II, the service sector grew because we got richer. Think about it: From domestic servants to waiters, blacksmiths to cobblers, and barbers to bankers, Americans have always been engaged in a variety of service activities. And, as the American economy grew and average incomes increase, Americans increased their demand for meals, repairs, grooming and financial services. Thus, more and more workers were pulled into the service sector by this increasing demand.

When we look at the post-World War II data, a different story emerges. First, productivity grew rapidly in industry, faster than the demand for industrial products, while productivity grew relatively slowly in the service sector. This meant that we needed fewer industrial workers and thus many workers were pushed out of industry. At the same time, we were still getting wealthier and demanding more services, and slow productivity growth in this sector meant that to provide these services it had to pull in the workers shed by industry.

The decline in manufacturing output and employment is a long-run phenomenon, not just a short-run problem. This means that policies designed to boost manufacturing need to be designed with this long-run trend in mind, and not just react to problems of the last 10 to 20 years.

Neither tax cuts nor tougher trade policy address the demand for more and varied services, nor will they address the relatively slow productivity growth in the service sector.