According to Mitt Romney, “Getting our fiscal house in order has become more than just an economic issue; it’s a moral imperative.” His solution: “To return the United States to the path of fiscal discipline, America must cut its government spending, cap that spending at a sustainable level, and pass a Balanced Budget Amendment to the Constitution.”

If this is Gov. Romney’s plan, why is he warning about the “fiscal cliff” we are approaching on Jan. 1? Why doesn’t he embrace the spending cuts that are to be enacted?

It’s because Romney and most of those who advocate budget austerity do not really believe that reduced government spending will spur growth. Their rhetoric on defense cuts makes this clear.

The fiscal cliff consists of tax increases and spending cuts mandated by the Budget Control Act of 2011. (This legislation passed in the wake of the standoff between Congress and President Obama over the debt ceiling in the summer of 2011.) In particular, the Act requires that defense and non-defense programs each be reduced by $492 billion from 2013 to 2021 for a total of roughly $1 trillion in spending cuts over 10 years. Tax rates would rise to their pre-2001 levels as well.

The chart below illustrates how the Act reduces the deficit over the next 10 years: 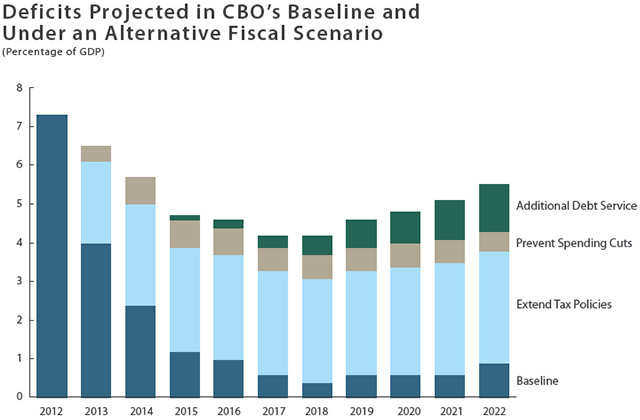 The dark blue bars show the deficit as a percentage of GDP if the Act is enforced.  The light blue bars show the increase in the deficit resulting from keeping the Bush tax cuts in place and the grey bars do the same for removing the spending cuts.  The green bars add in the extra debt service required by the larger deficits.

Romney singled out the defense cuts as “irresponsible” and vows to prevent them from happening. That’s understandable given his stance towards a strong defense, despite the fact that, according to David Wessel’s new book “Red Ink,” U.S. defense spending is equal to the combined defense spending of the next largest 17 countries.

But that’s not the main thrust of Romney’s opposition to defense cuts. For example, a commercial aired in Ohio asserts that not only will these cuts “weaken national security,” but they will also “threaten over 20,000 jobs.” A similar commercial running in Virginia claims 130,000 jobs in that state would be lost to defense cuts.

Economists call this idea “military Keynesianism.” Defense spending must be maintained at a high level in order to promote economic growth; if you cut defense spending, you throw people out of work. This is exactly what Romney is endorsing.

I find this an odd argument for a conservative to make. (So does the Cato Institute.) In particular, if austerity is a good thing, why doesn’t this apply to defense spending as well?

I think it is because Romney doesn’t really believe in austerity as an economic doctrine. The usual justification for austerity is that reduced government spending will free up resources and promote confidence among households and businesses, encouraging them to work harder and invest at higher rates in new capital. These increases in labor supply and investment spending result in higher rates of economic growth.

Romney’s military Keynesianism throws this aside and adopts the standard Keynesian doctrine that a cut in any type of government spending reduces aggregate demand and causes GDP to fall. It is another argument in favor of a stimulus plan, only this time couched in terms of defense spending.

Romney wants to cut government spending that he doesn’t like, such as unemployment compensation and food stamps, programs that are used by the 47 percent of the population who he says view themselves as victims. This has nothing to do with reducing spending in order to promote economic growth, but is all about an economic philosophy that puts businesses at the center of the economy. As I pointed out in an earlier post,  this is an incredibly narrow vision of what an economy is all about.