Gov. Mark Dayton and the new Legislature face a projected $1.1 billion shortfall in the 2013-2014 budget. I didn’t hear much about this during the recent political campaign, yet it’s the most important issue politicians and policymakers must wrestle with over the coming six months.

The deficit is not due to the recent recession and relatively slow economic growth. Rather, policy decisions and demography work together to create a long-run gap between spending and revenue.

The first culprit is the 1999 budget deal. It’s hard to remember, but the governor and Legislature confronted a very different problem in early 1999 than they do today: how to deal with large and potentially ongoing surpluses.

In May 1999, Gov. Jesse Ventura, House Speaker Steve Sviggum and Senate Majority Leader Roger Moe agreed to a three-part solution. First, income tax rates were reduced across the board. Second, education funding was increased (via increases in the funding formula). Third, part of the surplus was returned to taxpayers via a rebate based on estimated sales taxes paid by families.

This might have been a sensible agreement had there been triggers to rescind the tax cuts and spending increases if the economic forecasts didn’t pan out. But that’s not the way the deal was made. The income tax cuts and spending increases were enacted permanently, implying that if the economy did worse than expected, deficits would be baked into the budget cake permanently as well.

The second perpetrator of our structural budget problem is an aging population. The Minnesota State Demographic Center made this very clear in its 2011 report, “The Long Run Has Become the Short Run: Budget Implications of Demographic Change,” as did the 2009 Budget Trends Study Commission report. In particular, state spending on health care will continue to grow as the baby boom moves into retirement, putting increasing pressure on other parts of the budget.

What should we do?

So far, we’ve ignored these problems. The 2011-2012 Legislature started from the premise that tax rates could not change and did nothing to reform the system to increase revenues. This meant that the permanently lower revenue stream created by the 1999 budget deal remained unchanged. The governor and Legislature then patched together budget fixes based on draining endowments (tobacco settlement funds), shifting school funding from one biennium to the next and reducing allotments to higher education. 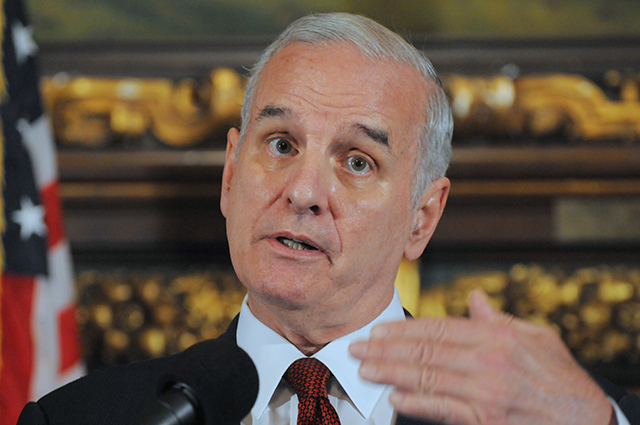 MinnPost photo by James NordGov. Mark Dayton and the new Legislature face a projected $1.1 billion shortfall in the 2013-2014 budget.

We can’t go on like this. School funding shifts and reduced higher-education spending hurt our ability to accumulate human capital and educate our future workforce. We cannot eat our seed corn and expect to prosper.

The governor and the 2013-2014 Legislature have the opportunity and the means to consider in long-run issues and enact policies in the 2013 and 2014 sessions that address the structural problems we face. Here are four suggestions for doing this:

None of these suggestions are catchy political slogans like “jobs, jobs, jobs” or “we took the state from a $6 billion deficit to a $1 billion surplus,” but the time for them is past. Let’s get to work.

Why do we have a state budget mess? Think Ventura years and baby boomers