The All-Star game has come and gone, and soon we’ll be preparing for the 2018 Super Bowl. These are not the last mega events on the horizon: Gov. Mark Dayton named a committee to attract an NCAA Men’s Final Four to the new Vikings stadium sometime between 2017 and 2020, and a who’s-who of Minnesotans is promoting a bid to host a World’s Fair in Minnesota in 2023.

Events like these bring attention and excitement to our state. Are they worth the resources we put into them?

We know that sponsoring organizations think mega events are worth their cost because they always commission an economic impact study touting their benefits. These studies focus on the direct effects of the event (e.g. the money visitors spend at the event) and indirect effects (e.g. increased earnings at hotels and restaurants attributable to the event).

A nice example is the New Orleans study of the economic effects of the 2013 Super Bowl.  They estimated Super Bowl XLVII generated $480 million in benefits, of which $262.8 million was direct spending and $217.2 million was indirect impacts.

Meet Minneapolis issued a fact sheet with economic impact figures for the 2008 through 2014 All Star games provided by Major League Baseball (MLB): 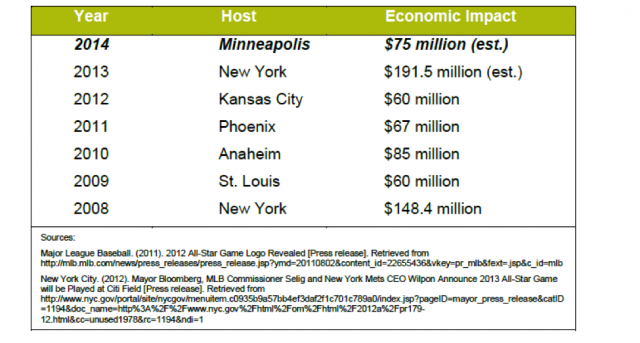 Economists not associated with host committees find that economic impact studies overestimate the economic effects of mega events. In particular, economist Victor Matheson has studied events ranging from the MLB All-Star Game and World Series to the Super Bowl, the NCAA men’s basketball tournament, and national political conventions. He gave a talk at the 2013 Minnesota Economics Association conference in which he set out the three problems common to these studies.

First, these analyses ignore the fact that spending at these events results in less spending in other sectors of the local economy. So, part of the $75 million economic boost claimed as part of the All Star game might be money diverted from Valleyfair or state parks.

Second, a large event such as the Super Bowl deters visitors who might otherwise come to Minnesota. This probably isn’t as big a problem in making estimates for Minnesota in January as it might be in July, but it needs to be taken into account.

Third, not all of the additional economic activity that occurs during a mega event flows into the local economy. For instance, hotel workers may earn additional income during a Final Four but much of the economic benefit in this sector might consist of the profits earned by out-of-state hotel management and owners.

Matheson summarizes the situation this way: “As a rule of thumb, take whatever the boosters say and move the decimal point one place to the left.” Thus, Minnesota should expect a $7.5 million economic boost from the All Star Game rather than the $75 million touted by MLB.

Benefits compared to what?

Once we’ve calculated the increased economic activity correctly we still need to compare this with the opportunity costs of hosting the event.  This includes both explicit costs (e.g. extra police protection, construction done to host the event) and implicit costs, i.e. the benefits we could receive if we spent money on alternative investments.

This is where we need to be careful about bidding for NCAA Final Fours (men’s or women’s) or hosting a world’s fair. Citizens and policymakers must ask the question, can we earn a higher return on the resources we would invest in these events by doing something else?

I’m sure that the answer is yes if we think carefully about our options. My preferred alternative would be to take the money we would otherwise spend on a mega event and put it toward early-childhood education. According to Art Rolnick and Rob Grunewald, each $1 invested in early-childhood education pays a return of about $7.  Neither a World’s Fair nor a Final Four will pay anywhere near these types of dividends.

It’s always fun to have a party. But let’s not confuse the ordinary, routine work we need to build and maintain a vibrant economy with the glamour of mega events.

Are mega events in the Twin Cities worth it?